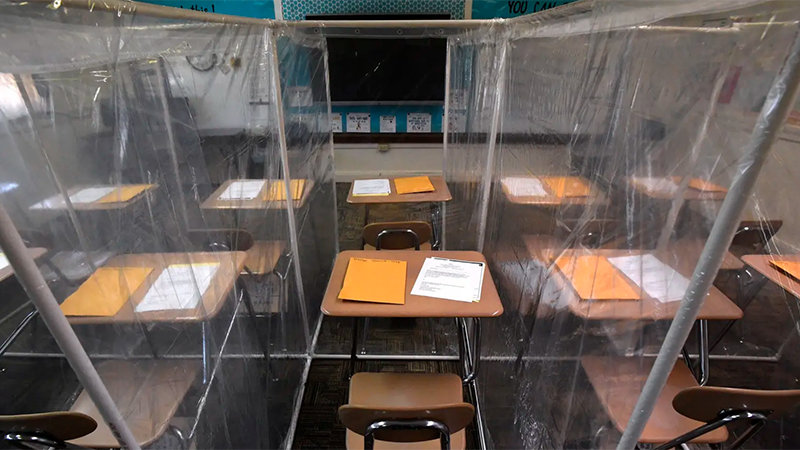 School districts will be required to report confirmed COVID-19 cases to the state within 24 hours, though the details of the reporting process may change after superintendent input. The Texas Education Agency and Department of State Health Services will track and report cases that spring up in school communities across the state as districts reopen classrooms while the virus is still spreading.

Morath gave very little information during his phone call with superintendents about exactly what school districts will be required to report and promised to release more details next week. The state will publicly report total COVID-19 numbers in schools each week, he said.

“This is necessary to inform policymakers but also just parents, school leadership, really everybody on the number of COVID-19 cases that are happening on campus, and what the implications of those COVID-19 cases are,” Morath said.

The announcement comes as the first public schools began reopening their doors this month and a wave of school-based COVID-19 cases followed closely behind. As Texas’ COVID-19 cases, hospitalizations and deaths climbed this summer, public health experts warned that reopening schools in the fall would undoubtedly result in infections on campus.

There is no federal government effort to track all infections in schools, but some researchers are trying to fill the gaps. Some states are tracking such data but not releasing it publicly.

“This information will be submitted to DSHS any time there is a positive case in a campus community. TEA is collaborating with superintendents on the reporting process and will finalize it in the coming days. As a result, it’s important to note that this data collection effort will be updated based on the input received from Texas school districts,” the TEA and DSHS said in a joint statement.

As of Wednesday, Boerne ISD reported five confirmed COVID-19 cases on its campuses and 64 people exposed, a week and a half after it opened classrooms, according to the district’s data dashboard. The district, which has two schools in Bexar County, a COVID-19 hot spot, and the majority in rural Kendall County, fought to be able to open all of its schools for in-person learning, despite warnings from Bexar County health officials that it wasn’t safe.

None of the five schools that saw infections were in Bexar County, said to Bryan Benway, a spokesperson for Boerne ISD, who declined to answer questions on how many staff members or students were infected or exposed. The district notified staff and students affected by phone and with a follow-up email containing instructions on next steps, including quarantining for 14 days.

It also notified staff, parents and students of the confirmed cases by email, and notified local health officials, as required by the state.

Henderson ISD sent notices to parents and staff each time an employee tested positive this summer and published them on its website. Since the start of the school year, 13 students and one staff member have tested positive in the high school, middle school and elementary school campuses, according to spokesperson David Chenault. Just 20% of enrolled students have chosen to participate in online learning, with the vast majority choosing to come back in person, he said.

Other school districts have chosen not to broadcast that information beyond the limited number of people who came into contact with those who tested positive.

And many schools resumed athletic training soon after the University Interscholastic League gave the green light for smaller school districts in late July. Navarro ISD, a Class 4A program, began football practice in August and almost immediately had to suspend the program when 10 students and 10 staff members were confirmed positive, according to Superintendent Wendi Russell.

Health experts say transparency from school districts, child care centers and the state is critical as parents make decisions about their children’s education and well-being — and as researchers try to understand the risks of in-person education. Although the data will be imperfect, scientists can learn from it as long as they recognize its limitations.

Schools “need to be very transparent,” said Diana Cervantes, an epidemiologist at the University of North Texas Health Science Center. “What is the plan? What’s going to happen if there is a positive case? What does all of this mean?”

This reporting should be familiar — if higher-stakes — for schools and day care centers, which are already required by law to notify parents of certain communicable diseases, Cervantes said.

While research shows that children are less likely than adults to suffer severe symptoms of COVID-19, they are still at risk of becoming sick enough to require admission to intensive care units. Children with preexisting conditions like obesity and chronic lung disease have been found to be more likely to suffer a more serious course of the disease. And kids can transmit COVID-19 to their teachers or families.

A recent report from the U.S. Centers for Disease Control and Prevention found that Black and Hispanic children were much more likely to be hospitalized than white children. Just over half of Texas’ public school students are Hispanic, and about 13% are black.

By Aliyya Swaby and Emma Platoff of The Texas Tribune, a nonprofit, nonpartisan news organization that is funded in part by donations from members, foundations and corporate sponsors. Financial supporters play no role in the Tribune’s journalism. Find a complete list of them here.