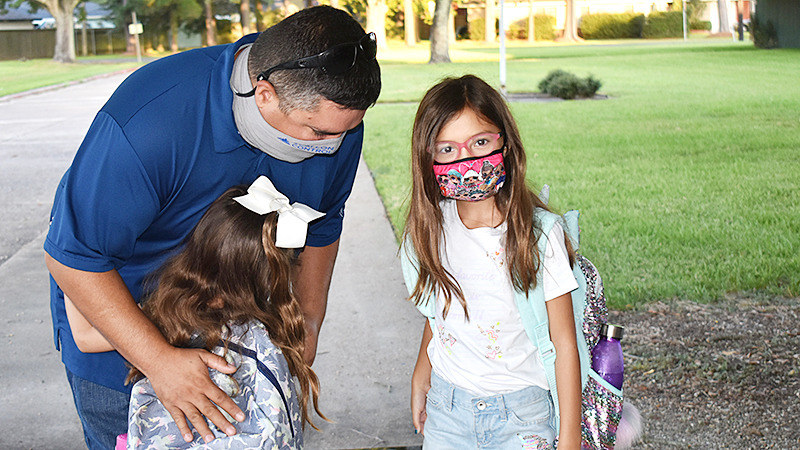 GROVES — When Van Buren Elementary School Principal Joe Cegielski caught sight of a parent and children approaching on the first day of school, he automatically said, “welcome back” with an arm outstretched in a greeting. 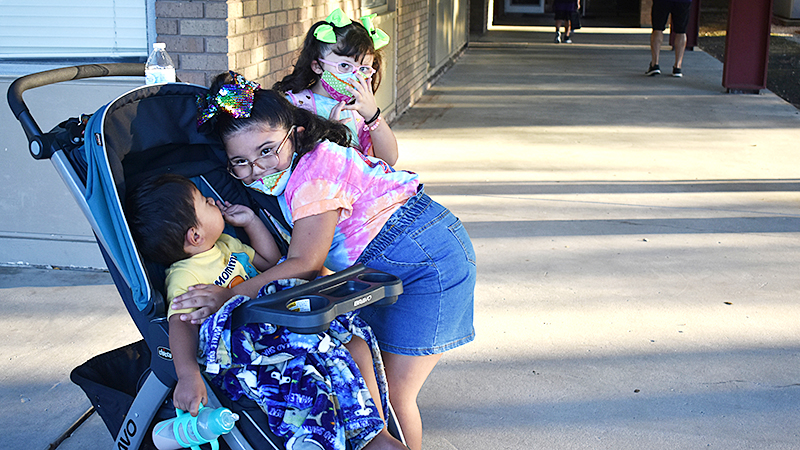 Those two words instantly turned to the theme from “Welcome Back, Kotter,” a 1970s sitcom.

For Cegielski, Wednesday morning with students returning to school for a new school year — the first time they had been back since March when the pandemic struck — was eerily normal.

“It feels like we had been here yesterday but it’s been five, six months. I’m still seeing parents’ friendly faces,” Cegielski said. “I’m not sure what I expected, but it’s like normal, just with masks.”

Somewhere around 360 students attend the K-3 school in Groves. Leaders opted to keep the same student drop off pattern as before, where parents pull up to the entrance and a teacher greets the student, while some parents walked their students to the front door.

There was a change though — usually parents can walk inside with their child, this year they stopped at the door.

There is no screening of temperatures for entering students; they will be screened only if they have symptoms of COVID-19. In addition, parents were given a self-check list. 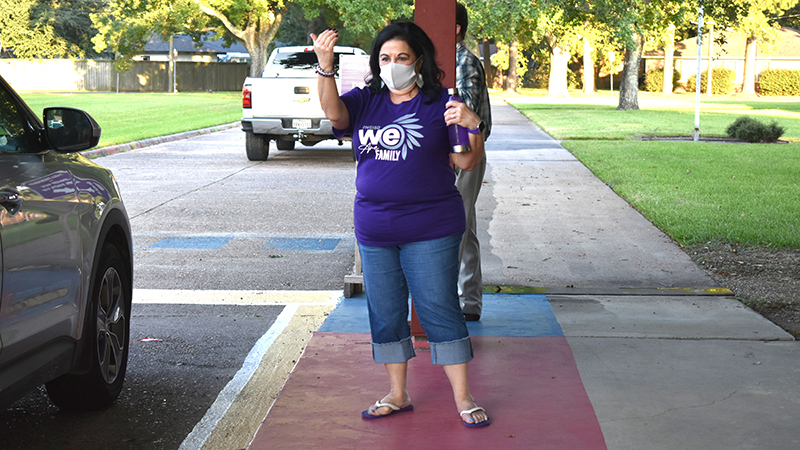 Teacher Lisa Badon waves for a vehicle to pull up during the first day of school.

The district held a Meet the Teacher event previously where, instead of families walking in and out of the classrooms, there were scheduled 15-minute blocks of time for the student and parents to meet the teacher.

There was a mixture of joy with a tinge of worry for some as they dropped off their child or children.

Ray Turner gave his daughters Paisley, a kindergartner, and Hillary, a second grader, a hug and kiss before they entered the school.

Turner said he has some mixed emotions about the kids returning to school.

I feel good but have mixed emotions about this mess,” Turner said as he touched his face mask. “Life goes on.” 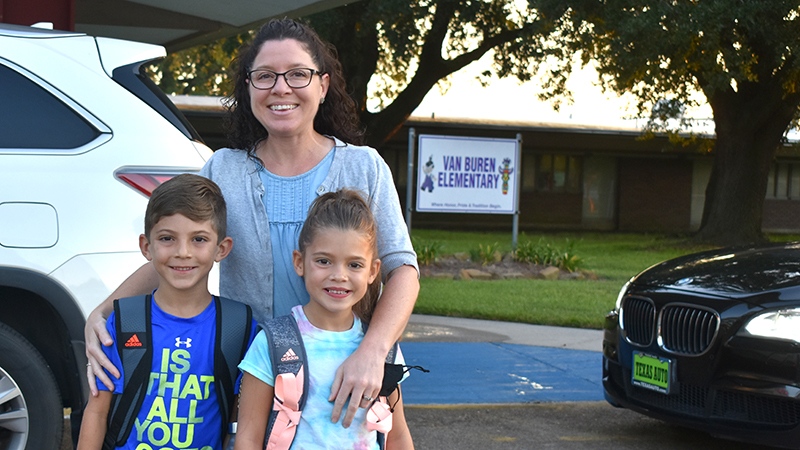 Kimberly Stephens, back, poses with her kids Eli, a third grader, and Elise, a first grader on Wednesday.

Lupita Rodriguez pushed son Cesa in a stroller as she walked Melody and Jazzlyn to the front of the school. She gave the girls some last minute safety instructions — “my kids are huggers” — before taking photos and giving out hugs and kisses.

“I’m confident they are doing everything they can and following all the safety recommendations,” Rodriguez said. “Everybody decides what to do (about sending their kids to school).”

Kelly Barrett walked up to the school with son Hayden, a third grader. With a smile she noted this is her fifth child to attend Van Buren; she’s been sending kids to this school since 2005, she said.

“I’m nervous but excited for the kids to get back to school,” Barrett said.

Third grader Eli Stephens and sister Elise Stephens, first grader, were excited to get back to school, adding they missed school and their friends.

Cegleiski said the end of the day schedule would be a bit different this year with bus riders released first, then day care children then car riders. 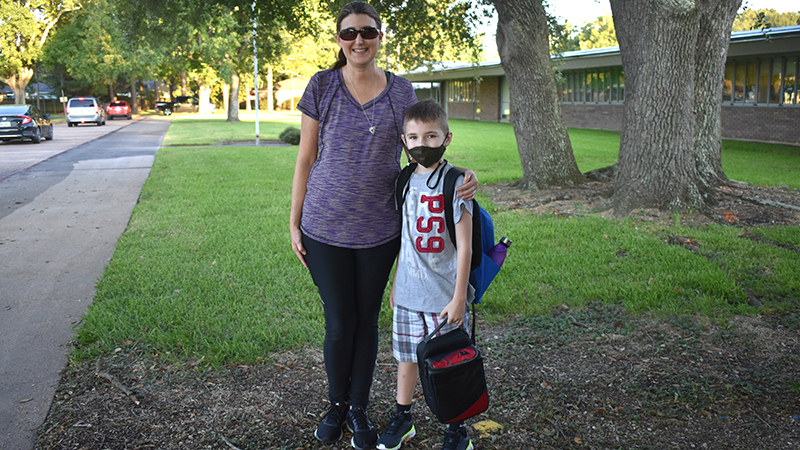 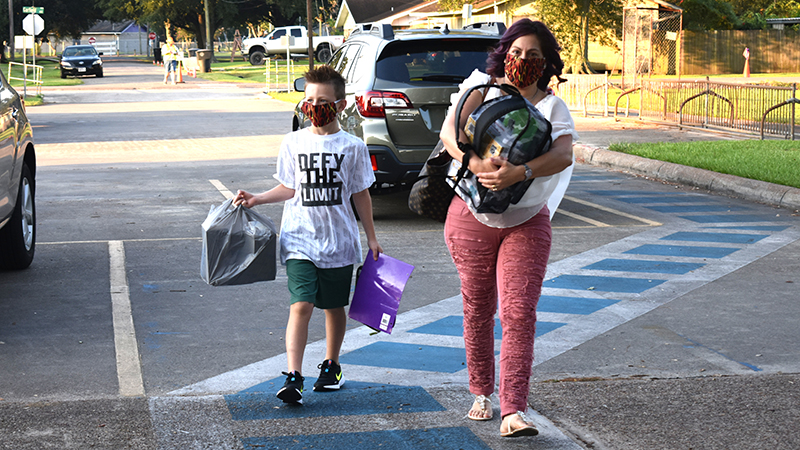 Giovanni Alfero, left, is walked to the front of Van Buren Elementary school by his mom, Winde Alfero, on Wednesday. Students in Port Neches-Groves Independent School District returned to classes for the start of the 2020-21 school year for in-person instruction. 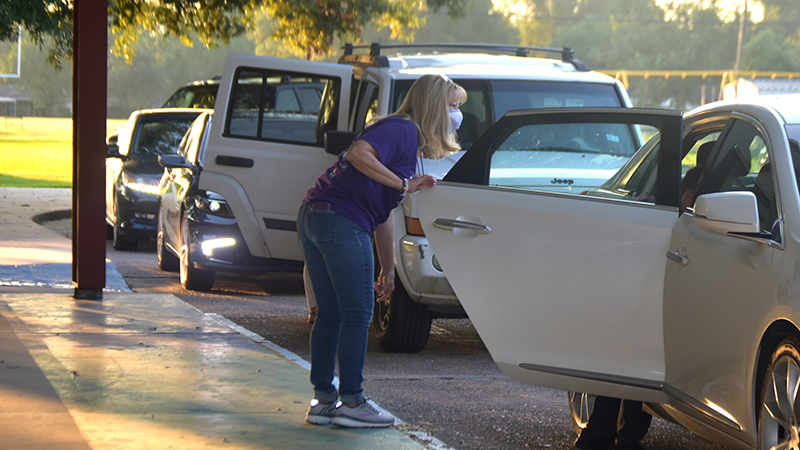 Teacher Christy Jones greets a student in the drop-off line at the school.