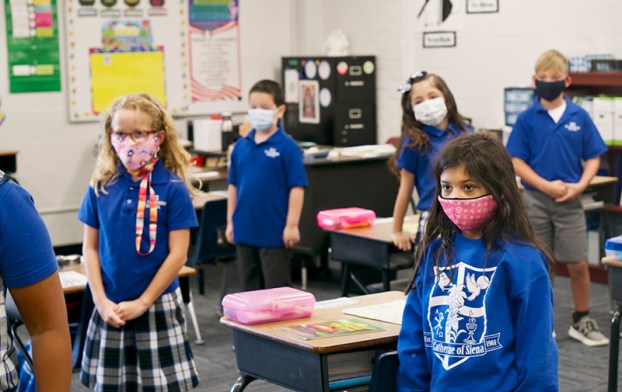 John Tran, Isabella Nmacias and Beatrice Ruiz started their sixth grade year this week at St. Catherine of Siena Catholic School, and none of them slept much the night before the first day. 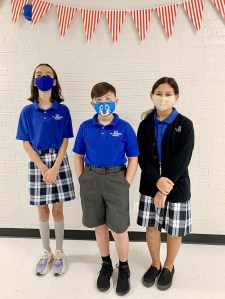 John said he woke up at 5:30 a.m. to get ready. Isabella woke up at 3 a.m., and Beatrice said she was so excited she didn’t fall asleep until after midnight.

“It’s really exciting coming back to school,” John said. “It’s a lot different than I expected, but the teachers are really nice. We are doing a lot of fun stuff in the class. Even though we have to wear masks, it’s still fun to go here because you can meet a lot of new friends, experience new stuff and learn new things.”

Isabella and Beatrice said they are excited to be back at school for the same reasons.

The former elementary grade students jumped from one teacher in a day to eight. Beatrice said she likes the change and the ability to learn in person.

“It’s very good to get out of the house,” she said. 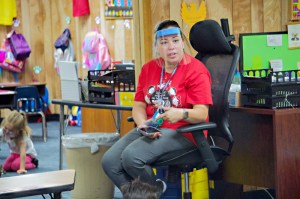 The trio nodded emphatically at their talked lack-of-sleep and eagerness to begin a new chapter. Even adhering to the mandatory mask order didn’t dampen their good mood.

“It’s good every once in a while when you take off your mask to get a breather,” John said. “Sometimes humidity gets stuck inside the mask and it gets really hot, but you get used to it. It is very worth it to be able to come to school.”

Beatrice and Isabella said they are both ready for the new school year and the future prospect of sports.

One plays soccer, the other volleyball. 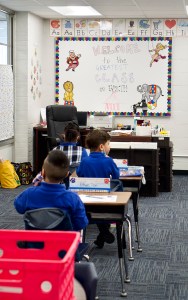 Students at St. Catherine are spaced out in classrooms as much as possible.

John is just excited to be attending classes in person.

“I’m pretty excited that I finally get to go back to school and not do online school,” he said. “I often delete things on accident.”

Standing next to John, Principal Renee Tolin laughs, glad she made the right decision to offer virtual and in-person instruction despite previous anxieties.

“Everyone going in was nervous, parents and teachers,” she said. “We were just worried about the unknown. Things change everyday with the virus and the guidance changes, too.” 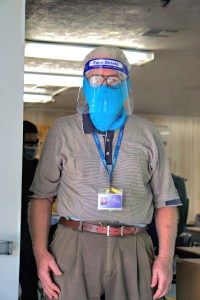 Tolin said after the first day of school many of those anxieties subsided.

“(Monday) I felt like everyone was really excited to get back to school,” she said. “Normally we open the door at 7:15 a.m., we had a line of cars. They were waiting and excited to drop their kids off. I think the kids were excited to be back.”

“The mood was excitement,” Tolin said. “Then the mood at the end of the first day was exhaustion, for all of us, but I’m really happy with how it’s gone the past few days.”

“All the teachers were pretty apprehensive, kind of scared and didn’t know how it was going to go at first, but when the kids got here they were excited,” she said. “It felt normal. It felt really good to be back in school with the kids.”

As a librarian, Bihm’s job entails reading books about social distancing, wearing masks and the importance of staying healthy.

She was surprised at how fast the kids adjusted to the new changes.

“They understood how to wash their hands,” she said. “We went over the procedure of hand washing and each class did that. They are doing what they are supposed to be doing. They are keeping themselves healthy, and we are making sure that they are healthy and safe, and they respond to that. They are adjusting extremely well, better than I thought. I thought it was going to be chaos, but it just feels normal.” 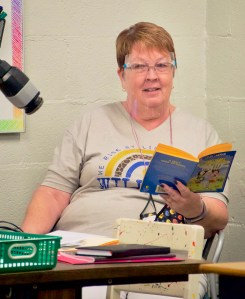 Fifth grade self-contained teacher Julie Gleisner reads a book to her class during the second day of school.

With the first day of school done, Bihm and Tolin both said they are looking forward to the rest of the year.

“Nobody slept over the weekend,” Bihm said. “We didn’t know. This was unchartered water. Today, it feels normal. It feels wonderful. We are all sticking together. It’s amazing and we can do this. It’s going to be a great year.”

Tolin’s advice to other schools as they restart — “Don’t panic.”

“There is a fear of the unknown before you begin,” she said.

“We were all worried. We were all planning a lot and thinking ‘what if this, what if that.’ Just put your plan in place and don’t worry about the what ifs until they pop up. Make sure that your plan is robust enough that you are doing the very best for the safety of your students and your teachers. Once you start, it helps alleviate some of those anxieties and fears.” 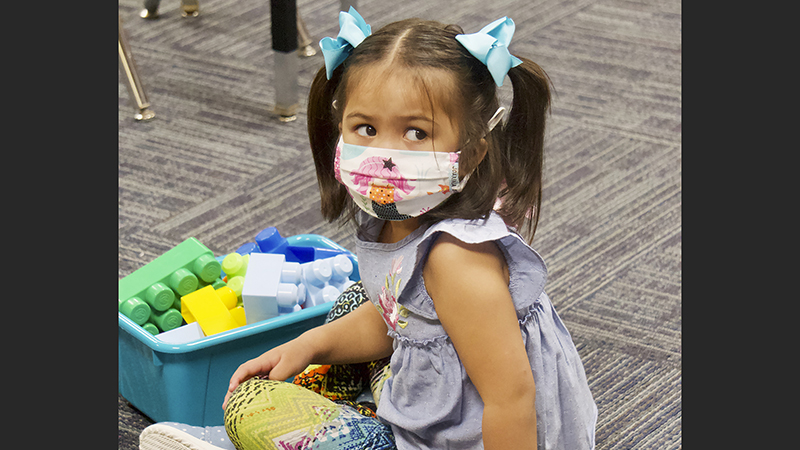 A Port Arthur murder suspect is facing a $1 million bond. Darian Petry, 46, is charged with the Sunday shooting... read more