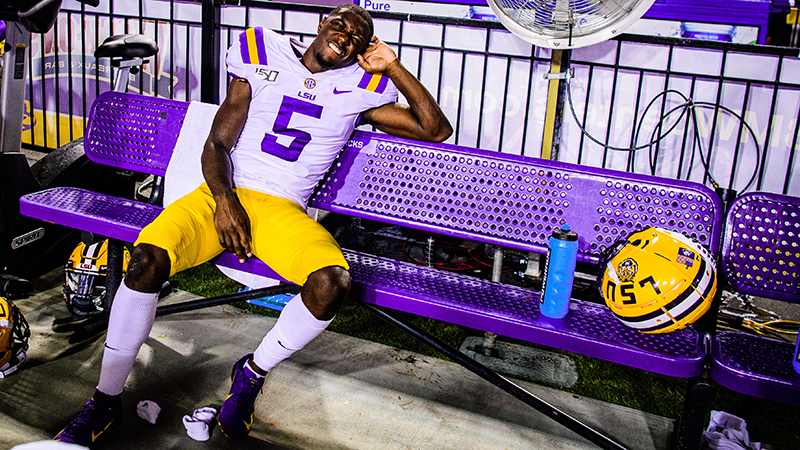 LSU nickelback and Port Arthur product Kary Vincent Jr. will opt out of his senior season and focus on preparing for the 2021 NFL draft.

Vincent made the announcement on Twitter Monday, the same day the Southeastern Conference was to release a 10-game conference-only slate for each team. The season has been rescheduled to start Sept. 26 due to the ongoing coronavirus pandemic.

“First, I would like to thank Coach Orgeron, the coaching staff and LSU for helping me mature and develop as a player and a person, both on and off the field,” Vincent said in a Twitter post with a photo of him pointing to his nameplate in the background.

“Winning the national championship last year was something that I will cherish forever, and the experiences of the 2019 season proved to me just how important teamwork, leadership and being selfless is to the success of an organization.

“The LSU fans are the greatest in the world. There’s nothing more exciting and fulfilling than putting on the purple and gold uniform and performing in Tiger Stadium in front of our great LSU fans.

“With thoughtful prayer and lengthy discussions with my family, we feel that it is in my best interest to opt out of my final year at LSU and begin training for the NFL Combine. I have worked long and hard for the opportunity to play in the NFL. I’m humbled and excited about attacking this next challenge with humility, integrity and dignity. I will always be Forever LSU.”

Vincent lettered each of the past three seasons at LSU and helped the Tigers wrap up a 15-0 record with a 42-25 win over defending champion Clemson in the College Football Playoff title game in New Orleans in January. He had three solo tackles and played solid defense to deny Clemson first-down conversions.

Vincent was a two-sport standout at LSU after winning two 200-meter state championships at Memorial High School and earning a spot in the 2017 Under Armour All-America Game as a four-star recruit. He was a 4×100-meter relay All-American and earned two SEC championships in that event.

He earned eight starts and intercepted four passes (six for his career) as an LSU junior, his most recent coming against Oklahoma in the Peach Bowl, one of the playoff semifinals. Vincent defensed 13 passes and made 44 tackles.

Fansided projects Vincent will be selected in the middle rounds of the 2021 NFL Draft, but adds 5-foot-10, 189-pound defensive back will need to “test off the charts” in pro-day and combine workouts, as well as add bulk and measure taller than his listed height, to project as an outside cornerback.

Speed likely will not be a problem for Vincent, who ran a wind-aided time of 10.07 seconds in the 100 meters in the 2018 LSU Invitational.