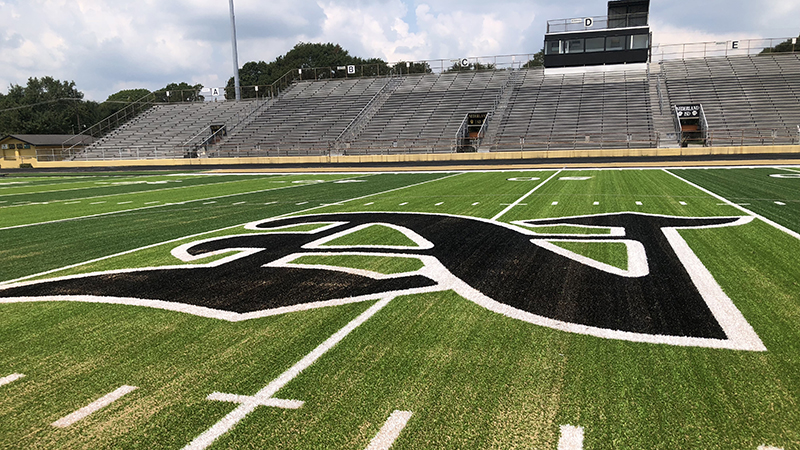 The Nederalnd “N” logo, the hashmarks and numbers are not painted. They are made of black and white grass glued into areas of the turf that have been cut out for them. (Brad Robichaux/The News)

NEDERLAND — The Nederland Bulldogs say COVID-19 hasn’t really hurt them much. If anything, it’s made them more determined.

“For most of our teammates, we’re out here working every day,” senior defensive back and wide receiver Kerrington Broussard said. “Most of us, during COVID, we were working during it. I feel like we’ve taken advantage of it.”

Senior linebacker Mikey Rangel sees a sense of determination in the senior class this year, something that is helping inspire younger guys to show more determination.

“Honestly, this season, with this team, it’s a lot more disciplined,” Rangel said. “A lot more of us are getting together for one type of goal. We’re really kind of seeing the big picture, which is what the coaches are trying to get us to do this year. A lot of young players are watching us. We’re really having a lot of young guys that are showing up because they want to be here with us in our season, so we’ll make of it what we can if we get to play.”

Head coach Monte Barrow sees it, too, and says it’s one thing for the coaching staff to see determination, but it can be harder for the players themselves to see it.

“If I’m a senior, I’m going to want to know who’s all in and who’s going to be there on Friday night and make this the best year we can have,” Barrow said. “It’s not mandatory, it’s voluntary. Coaches notice all the time, of course, but your teammates notice when you’re here and when you’re not here. These guys want to be out here. They love the game.”

There’s good reason to be excited this year, too. The Bulldogs will be playing on a brand new turf field at Bulldog Stadium, and several players have expressed excitement at getting the chance to try it out.

Some may have already.

“I’ve had to run them off the turf,” Barrow said. “They tried to jump the fence at the stadium, so they just love football.”

Senior running back Josh Mazyck said he’s going to miss the mud, but is looking forward to playing on the new turf.

“It isn’t muddy, so no more slipping,” he said. “I’m going to miss the mud though, that’s what football’s really about when it’s on grass.”

For Rangel, the turf field means their archrivals at Port Neches-Groves won’t have the mud as an excuse when the Bulldogs play the Indians at Bulldog Stadium on Oct. 23.

“I feel like we’re going to be able to call it even, because they always have the excuse talking about some mud bowl,” Rangel said. “Even back when my brother played they were talking about mud bowl. It’s looking nice over here.”