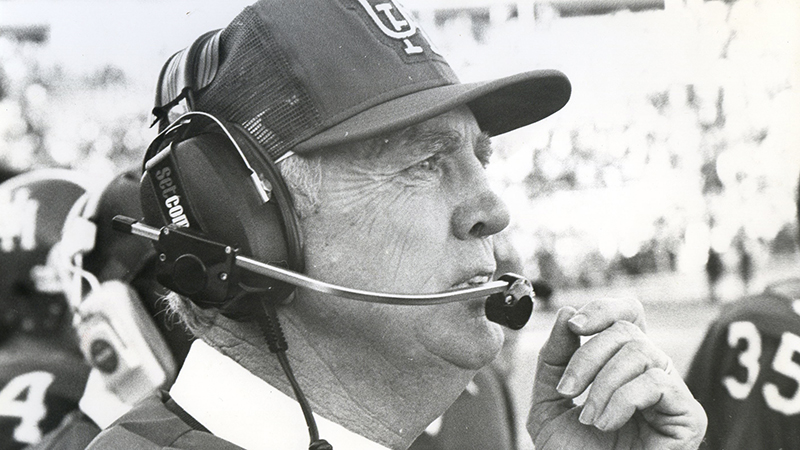 Wade Phillips played his junior and senior seasons under his father Bum at Port Neches-Groves High School before Bum took the defensive coordinator position under Bill Yeoman at the University of Houston for the 1965 season. 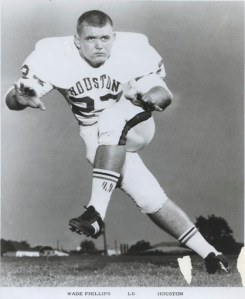 Wade Phillips was a linebacker at the University of Houston from 1966-68. (Houston sports information)

That was the year after Yeoman recruited running back Warren McVea, the Cougars’ first African American football student-athlete.

“We had African American players and nobody else did when we played, basically,” Wade Phillips said. “I played with all those guys. We played Southeastern Conference teams like Mississippi State, Ole Miss and Georgia. It was a great experience because at that time, the schools were segregated in high school for sure. All of that changed, and you learn people are people. Your friends are your friends. It doesn’t matter who you are. You make a lot of lifetime friendships.

“Coach Yeoman was one of the people who started all of that. He recruited the best player. He wasn’t worried about race. He was forward-thinking when other people weren’t.”

Yeoman, who spent 25 seasons leading the Cougars’ sidelines and guided them to four Southwest Conference championships, died Wednesday. He was 92.

The University of Houston athletic department announced Yeoman’s death. Yeoman is the school’s first College Football Hall of Fame inductee, having won a school-record 160 games for the Cougars from 1962-86.

Yeoman is credited with leading Houston football from “relative obscurity to national prominence.” Houston competed as an independent football program from 1960-75 and joined the Southwest Conference, a forerunner to the Big 12 Conference, right after that.

Yeoman’s teams went 6-4-1 in bowl games, including Cotton Bowl victories over Maryland in the 1976 season and Nebraska in the 1979 season. But 17 times Yeoman’s Cougars finished with winning records, nine of those times with eight or more wins each, and the 1976 team earned its highest ranking ever at No. 4 by the Associated Press and United Press International.

On the field, Yeoman is best remembered for inventing the Veer offense, also known as a triple-option offense. Houston led the nation in total offense for three straight years (437 yards in 1966, 427 in 1967 and 562 in 1968), registering 42.5 points per game in the latter.

“Coach Yeoman was a leader and visionary in our game,” current Houston coach Dana Holgorsen said. “Not only was he a Hall of Fame coach, but also he brought our program to national prominence during his tenure. His legacy will live on in our program and will stand the test of time. Our thoughts and prayers are with his family, former players and coaches.”

Wade Phillips was a quarterback at PNG but converted to a linebacker on his father’s UH defense. He served as a graduate assistant under Yeoman in 1969 before joining the staff at Lutcher Stark High School in Orange (since consolidated with West Orange-Stark), beginning a long career that has covered 42 years in the NFL and three head coaching gigs.

Although Yeoman was an offensive mastermind, Phillips said he learned from him how it took everyone on both sides of the ball to win.

“He was my coach for four years and I was a graduate assistant, so he was a big influence,” Phillips said. “Obviously my dad was a big influence. Being with [Yeoman] five years and seeing how you treat people, all of that rubbed off on me. Great coach, but a great man as well.”

Yeoman was as an assistant coach at Michigan State from 1954-61 after spending three years in the United States Army. A native of Elnora, Indiana, Yeoman started his collegiate playing career at Texas A&M as a 17-year-old and transferred to Army, where he played center for three seasons (1946-48), serving as a captain in 1948 and helping the Cadets (now Black Knights) to a 22-2-4 record.

Yeoman was a member of the Southwest Conference Hall of Honor, Cotton Bowl Hall of Fame and the Fellowship of Christian Athletes Hall of Champions. In 2002, Yeoman received the Paul “Bear” Bryant Lifetime Achievement Award.

“For three decades, Coach Yeoman worked tirelessly to build the foundation and set the standard for success at the University of Houston,” UH athletic director Chris Pezman said. “He was one of the most innovative minds in the history of the support, securing his place in the College Football Hall of Fame. Coach Yeoman will always be beloved by his players and dedicated his life to helping them succeed on and off the playing field.

“In his retirement, Coach Yeoman remained a passionate supporter of our athletics programs, and we are thankful for the progress he led in not only our Football program but our University as well.

“On behalf of the University of Houston Football family, we extend our deepest condolences to the Yeoman Family, and may we never forget his love, loyalty and dedication to Houston.”