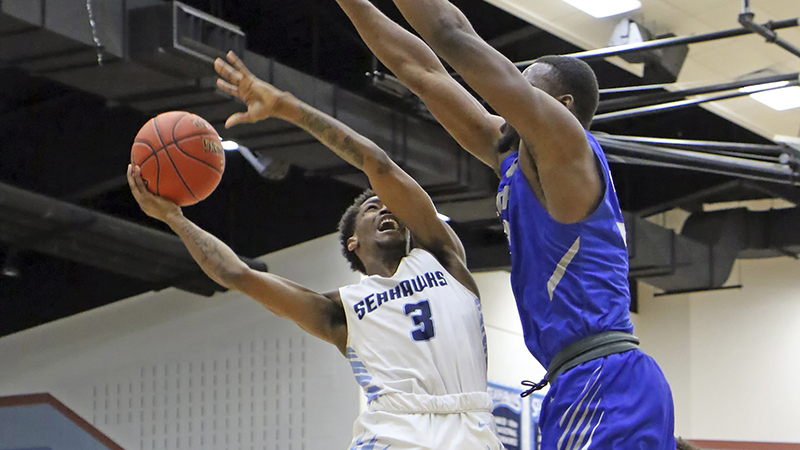 Ferontay Banks tries for a shot under pressure from a Kilgore defender during a Jan. 6 at the Carl Parker Center. (Lamar State sports information)

For Lamar State College Port Arthur, there won’t be any fall games because all of their competition will take place in the spring.

The NJCAA mandated that games for softball and men’s basketball, the two sports programs at LSCPA, will both begin competition on Jan. 22 next year. This will leave the fall for practices and a few scrimmages for both programs.

Scott Street, athletic director at Lamar State College Port Arthur, said that while the school has plenty of time to figure out how its schedule is going to look, the COVID-19 pandemic has, like all other sports, made planning complicated.

“You look at the Power 5 conferences and they’re still trying to figure out the football season right now,” Street said. “We have to keep an eye on the current status and make adjustments as we go. It’s hard to plan now for next January when the season does start, but we’ll have a way to begin the year, and we’re going to keep continuing to monitor the situation.”

The NJCAA is allowing 60 consecutive calendar days for practice and scrimmages for both basketball and softball. Basketball will begin practicing Sept. 15 and will be allowed to continue until Dec. 15. Softball begins Sept. 4 and continues until Nov. 15.

Basketball programs will be allowed five scrimmage dates total for the year and a maximum of two in the spring. Scrimmages cannot have more than two outside opponents.

For softball, seven dates can be allotted for scrimmages against outside opponents.

Street said that there has been a degree of shuffling around of normal dates, but that the practice schedules are reasonable. Normally, basketball begins practicing Oct. 1 and games would begin after Nov. 1.

“In this case they’re really just extending practice an additional 30 days to get to the 60 allowed,” he said. “For softball I think they’re pretty much going to have a normal season. It’ll be cut a little short, as they normally start mid-August and go through Nov. 1, give or take. They’ll miss two weeks of practice and one week of competition, but I think, considering everything going on right now, that seems pretty fair.”
In 2021, basketball gets going again with practice Jan. 11, with softball allowed to start back up a day earlier before both are allowed to play their first games.

Basketball will be allowed to play 22 games, down from the usual 30. Street said that, likely, the Seahawks will play their usual 17 conference games and find five non-conference games to play to fill out the rest of the season.

As competitive as LSCPA’s Region XIV has been, Street says one of the biggest challenges this year is figuring out how to have the season in the first place.