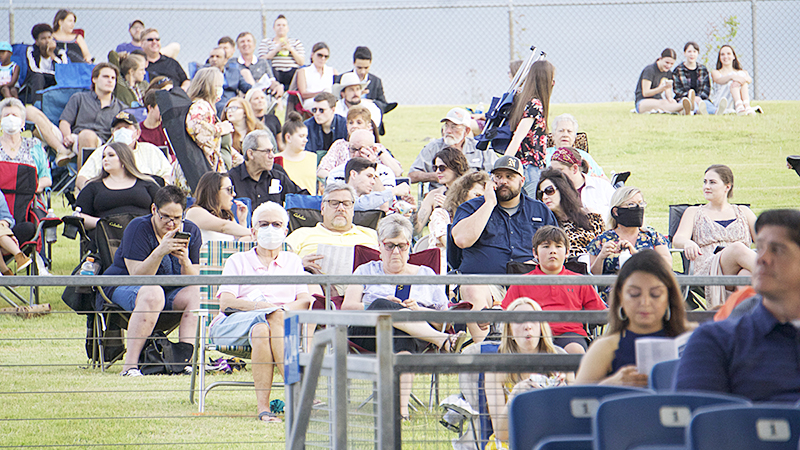 Nederland High School parents, families and friends wait on the lawn at Ford Park before graduation in May.

Commissioners will meet at 10:30 a.m. Monday on the issue. The public can view the meeting on the county’s webpage.

Jefferson County Judge Jeff Branick said an interested investor approached the county about purchasing the complex. Texas law requires the county to open bidding to everyone.

The minimum bid for Ford Park is $20 million.

There are upsides and downsides for the county, he said.

“A downside, some may consider it an upside, is that the county won’t control Ford Park,” Branick said. “An upside is the county will save about $7 million associated with maintenance, operations and principal and interest cost.”

Another upside, he said, is the new owner will have to provide they have more capital than the county so they can make improvements and bring in more entertainment.

In addition, once the complex is sold it will be taxable and the county will receive property tax revenue.

Branick said another requirement will be that the buyer honor all existing contracts, such as the ones with YMBL, which hosts the South Texas State Fair, and baseball academy held in the sports complex. 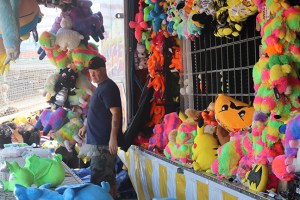 A vendor sets up stuffed animal prizes for carnival games at the YMBL South Texas State Fair at Ford Park in 2019.

Branick did not specifically identify the person or persons interested in buying Ford Park but did confirm the interested buyer is associated with horse racing.

Precinct 3 commissioner Michael Sinegal, whose precinct covers South Jefferson County including Pleasure Island, is a proponent of the sale and of pari-mutuel wagering.

The propositions did not list a location for the activities though.

Sinegal has been in favor of the wagering for some time and has had high hopes that some sort of gambling would be brought to Pleasure Island.

So far he has heard mostly positive response on the sale of Ford Park — the only negative comments came from those in Port Arthur and South Jefferson County asking “why not Port Arthur?”

But Ford Park’s location on Interstate 10 is a plus, he said.

“It’s ideal for what they are trying to do. It’s a no brainer,” he said.

The interested investors also have a team of entertainment type people whose job it is to reach out and bring entertainment in, he said.

Sinegal said he couldn’t speak for the rest of the commissioners court, but he is in favor of the sale. He added if the sale goes through, it will relieve some debt to taxpayers.

Branick said the public can have some input into the sale via the county’s webpage.

A digital box will be added with wording asking if the person is in favor of or opposed to the sale. The digital box should be active by Friday or Saturday and is something the court can take into consideration.

Specifications for the invitation for bid may be obtained from the Jefferson County Purchasing website at www.co.jefferson.tx.us/purchasing/main.htm or by calling 409-835-8593.