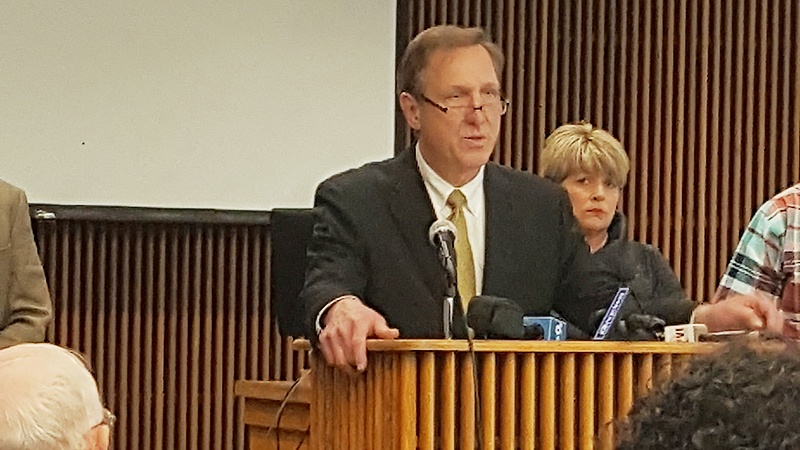 The numbers of cases and deaths in Jefferson County soared in July, but the 14-day average has dropped from about 108 cases through July 20 to about 76 through Aug. 3, according to recent statistical charts from Branick’s office.

For the four-city region covered by the Port Arthur Health Department (Port Arthur, Port Neches, Groves and Nederland), the average approached 40 twice during the last two weeks of July but took a sharp turn down to 25 going into this past weekend, only to see an uptick approaching 30.

“I was talking to the Governor the Saturday before last. He felt we would start seeing the numbers go down as a result of masks,” Branick said. “That’s what his medical personnel were telling him.”

Abbott issued an executive order July 2 requiring citizens 10 and older in Texas counties with more than 20 COVID-19 cases to wear a mask over the nose and mouth while in most public establishments. On July 15, the Jefferson County Public Health Department sent a reminder that all residents who test positive for the virus are required to quarantine 14 days from the date of the test.

The drop in average has also helped to stabilize the hospitalization rate, intensive care unit and ventilator utilization during the past week, according to Dr. Praphul Joshi, who keeps track of COVID-19 data for the county.

July was also the deadliest month among coronavirus cases. Of 68 total deaths since local COVID-19 numbers were first tracked in March, 34 of those (50 percent) occurred in July, and 13 of them were reported between July 25-31.

Port Arthur Health Department Director Judith Smith could not put a finger on why deaths increased as the curve was going down.

“Those who had the virus and think it is not a very serious, it may not be the same effect for everybody,” Smith said. “There are some people who have underlying conditions who have COVID-19, and they do extremely well, and there are some who do not.”

The mortality rate for Jefferson County is 1.6 percent, just 0.1 percentage point higher than the Texas rate but much lower than the national rate of 3.3 percent. Jefferson County has recorded 4,131 confirmed cases, including 1,355 in the PAHD service area.

Branick noted conflicting information from the Centers for Disease Control and Prevention and other medical experts about how long coronavirus would remain a threat to health in America.

Robert Redfield, the director of the CDC, told multiple media outlets July 14 the pandemic could be “under control” within four to eight weeks if everyone in the United States wore a mask. Tuesday (Aug. 3) marks three weeks since that statement.

Doctors are also saying coronavirus will reappear in the fall, Branick said. That sentiment would echo a statement COVID-19 expert Dr. Anthony Fauci made in April.

“I think as a public health official, it’s hard to look into the future and see and say things,” Smith said. “I am a cheerleader for the mask. I do know whether it’s going to be 100 percent or 80 percent [effective], it will have some barriers from spread.”

Smith also uttered frustration over the lack of consistency in wearing facemasks.

Free walk-up testing for COVID-19 began Tuesday at the Carl Parker Center at Lamar State College Port Arthur. It will continue there Wednesday and Thursday from 8 a.m.-4 p.m., or until all testing supplies are exhausted.

Branick has not set a standard for determining when he may convince Abbott to loosen his rules on face coverings.

“That’s a question I’m going to have to follow and watch the numbers on and not make a commitment on,” he said. “We were told the virus does not like heat, and it did not disappear during the heat.”