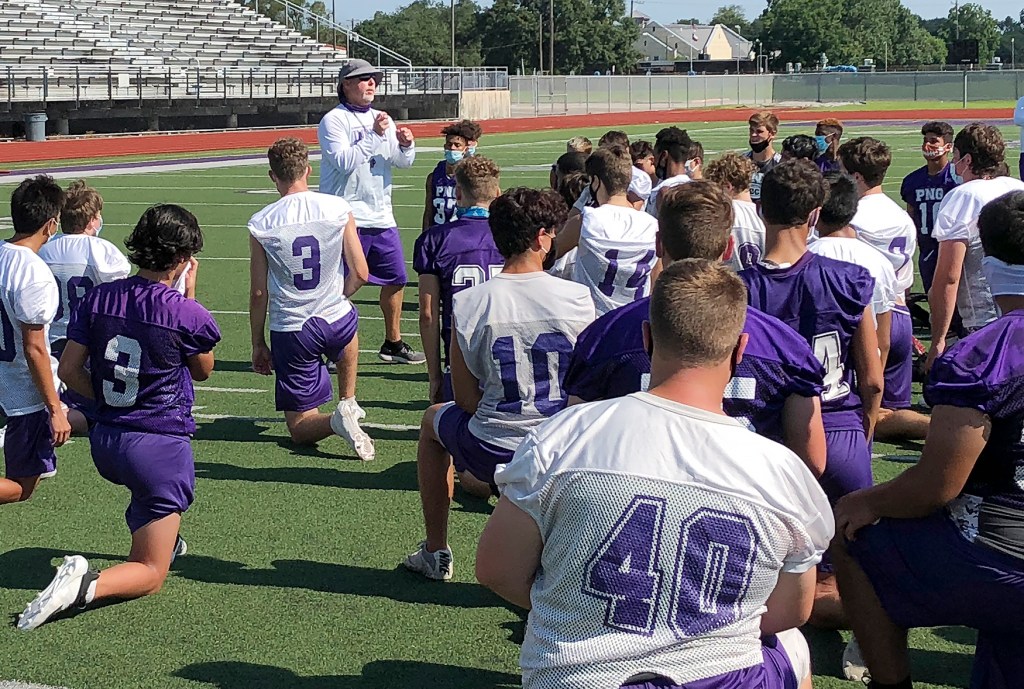 PORT NECHES — Oct. 23 and Nov. 6 are two days that Port Neches-Groves Indians are looking forward to.

Oct. 23 is an obvious one — the Indians will take a trip down the road to play archrival Nederland in the Bum Phillips Bowl.

“We played a really good game against them last year and they came out on top last year, but this year I’m really looking forward to playing them,” senior quarterback Blake Bost said.

Senior outside linebacker Dean Guidry was a little less congenial when speaking about the games he was looking forward to the most this year.

“Crosby and Barbers Hill got us last year,” he said. “We’re hoping to return the favor this year.”

The anticipation for the start of football competition tracks well with the enthusiasm the players have shown over the summer as the team returned to campus to get started on workouts.

Left without an offseason in the spring because of the COVID-19 pandemic, head coach Brandon Faircloth said the return to football has been a lot of fun for everyone on the team.

“We had a great attendance. The kids were dying to get back,” he said. “After a March, April and May of not having school, those first days of June were so much fun to get the kids back on campus and to be around. And we eased back into it with our strength and conditioning, and we did football every day. It was a lot of fun, and you can tell today how much it paid off, the last two months. I think we ended up with 18 to 20 practices this summer.”

COVID-19 isn’t done making changes to the season. Though the Indians will have to play to half-capacity crowds, they don’t expect the suppressed turnout to bother them too much.

Senior wide receiver Brady Nail said PNG will fight just as hard, regardless of the size of the crowd.

“It would be nice to have 100 percent, but when you’re in the game, you don’t even notice the crowd,” Nail said. “It’ll just be like a regular game.”

He, too, is looking forward to facing Barbers Hill again.

“I feel like Barbers Hill is going to be the toughest,” Nail said. “They were pretty good last year. That’s going to be a fun game for sure.”

Faircloth agrees that the Indians aren’t going to let the pandemic’s stadium rules to get to them.

“We play for the fans but we don’t ever consider who’s there,” he said. “There’s too much on the line, and that’s our jobs. Do the fans make it a greater atmosphere? Absolutely no doubt about it, and we’ve got the best fans in the state. We won’t have as many of them, and it’ll be different, but as far as affecting us, everybody’s in the same boat, and we practice every day without them. We know how to handle it and we’ll get used to it.”