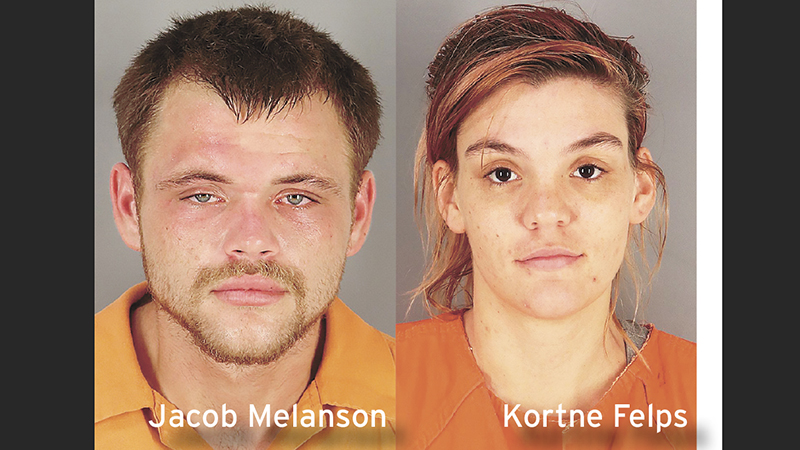 Indictments were handed down to a local couple that allegedly bound a man with zip ties, held a gun to his head and beat him with brass knuckles because the man had previously sold them fake drugs.

Jacob Jule Melanson, 24, of Port Neches and Kortne Michelle Felps, 26, of Groves were each indicted last week for aggravated kidnapping and aggravated assault for the June 7 incident.

According to the probable cause affidavit, police were called to Executive Inn, 5131 E. Parkway in Groves, in reference to a man screaming in one of the rooms. Officers knocked on the door and were met by Melanson who said nothing was wrong and the noises were due to him and his girlfriend having sex.

When police asked to speak to the girlfriend, identified as Felps, the door to the room was opened then closed as she went outside to talk. This is when officers heard a man begging for help from inside the room and found a male victim on his knees bound by zip ties.

Officers detained the couple, placing them in handcuffs while investigating.

The victim told police Melanson pointed a gun at his head and beat him in the face while wearing brass knuckles, and officers noted he had severe injuries around his face and head.

A handgun was located on the bed underneath the covers, according to the affidavit.

Melanson made a statement to officers about tying up the victim and assaulting him because he had previously sold him fake methamphetamines.

The victim later stated he was asked to bring drugs to Felps, which he did. As he was trying to leave some time later Melanson met him at the door and pointed a gun at him, ordering him back inside, adding he was zip-tied by Felps and assaulted by Melanson.

Melanson remains in the Jefferson County Correctional Facility on a charge of aggravated kidnapping and aggravated assault with a deadly weapon with bonds at $250,000 each and a charge of unlawful restraint with a $15,000 bond.

Felps also remains in jail on charges of aggravated kidnapping and aggravated assault with a $75,000 bond on each charge.

An indictment is not a final conviction of guilt. It is only a ruling by the grand jury that allows the district attorney’s office to proceed with a criminal case.