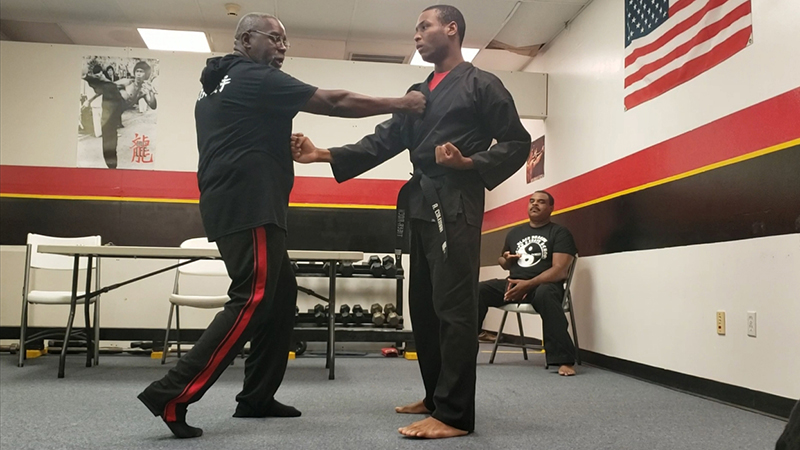 Jack Turner might say his life isn’t all that interesting, but there are some stories of his that could come right out of a Kung Fu movie.

Turner, along with many of his friends and relatives, were fascinated with what they saw in Kung Fu theater on Saturdays while growing up, enough to foster in Turner a lifelong love of martial arts.

Turner, his brother and two cousins, all practiced martial arts in the styles they saw in the movies. Turner was the youngest of the group, and his older relatives taught him all the moves they learned by watching moves on the big screen and replicating them on their own.

“You start saying ‘Wait a minute, I wonder if I could do that?’” Turner said. “Everybody knew karate, they practiced karate.”
Turner began at age 10 attending formal classes in Beaumont taught by Fred Simon. He had already done gymnastics, and he had the martial arts his brother and cousins taught him. Now it was Turner’s turn to be a teacher.

“What I learned at the school I would come back and show them what they already knew,” Turner said. “We used to be a terrible force to be reckoned with, because all of us practiced martial arts and we were pretty good.”
Turner blended his formal training with the martial arts he had been already practicing. For him it was much like learning how to write with the opposite hand.

Turner says there’s a difference between the formal training that martial artists practice and the moves that they employ when actually engaged in a fight. When fighting, Turner drew from everything he learned.

“You wait to see what’s coming to apply what’s necessary,” he said. “When he throws a round punch at me, I can use the block they taught me or I can use the martial arts I already know. When you’re fighting, you never see any formal training, but they all have been trained.” 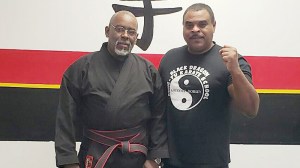 “He knew what I was coming for. It’s like the movie Ip Man, this guy is trying to open up a dojo, but you’ve got to get some kind of recognition if you’re going to get some students, and you can’t just fight anybody. You’ve got to go fight the best in the land.

Turner and Young fought. Turner was quite impressed by the Wing Chun style that Young used. Eventually, the match devolved into straight fighting until Young’s mother emerged from the house to break them up.

Turner and longtime friend Greg Dorsey began training under Young, learning the Wing Chun style. The style emphasizes staying relaxed. It’s a martial arts form that’s great for older practitioners, Turner said, even though he was still young when he began learning it.

Turner practices Wing Chun to this day. He occasionally serves as an instructor at Dorsey’s Black Dragon Kung Fu Karate School in Beaumont.

Turner competed in local tournaments until someone put the bug in his ear to try to gain sponsorships to travel with the Professional Karate Alliance. With sponsors, Turner was able to enroll at a major training facility in Phoenix, Arizona, while also attending Arizona State University and Phoenix Business College.

“I dropped everything I had and moved to Phoenix,” Turner said. “I got a contract with some of the sponsors and the gyms there and got into fighting on the Karate Alliance.”

Turner went to Phoenix with little more than a car and a handful of funds. He found a job and a gym membership, living out of his car while attending classes and training.

“I did the hungry young martial arts guy deal,” Turner said. “You join a gym facility immediately where you could rent a locker. When you’re getting ready to go somewhere you go there, take a shower and nobody has to know how you live. When I talk to young guys these days and they talk about struggling, I tell them it’s going to be really hard to impress me if you want a pity party or you’re struggling. I say nobody has to know how you do it. If you have a vehicle you’ve got a place to live.”
Turner enjoyed his time in Phoenix, but eventually returned to Beaumont to tend to family matters.

“I just got into working, got married and basically was glad nobody knew me here, because on TV martial arts, everybody wants to come and challenge you like I did,” he said. 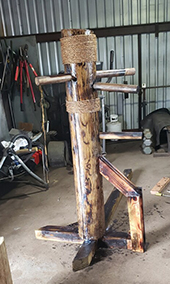 Jack Turner, owner of Jack’s Muffler, built this Wing Chun training dummy himself in a back section of his garage.

As a martial artist, Turner is content to fade into the shadows like the Kung Fu masters of the movies, but beyond martial arts, Turner leaves a major mark on the community.

Turner is very active in community work, helping with the Salvation Army, Boy’s Haven, the March of Dimes and youth programs with the Pride of Beaumont Masonic Lodge No. 291.

After returning to Beaumont, Turner attended Lamar Institute of Technology, and now teaches industrial and mechanical maintenance at the school. He’s also the owner of Jack’s Muffler in Port Arthur, where he spends his time working on vehicles and practicing his martial arts with training dummies he makes himself.

“I’ve trained and worked out for myself, but I basically went into the background,” he said. “There’s a couple of guys that I work out with and train, but not very many. I have a few prodigy guys that I work with, but to me I just enjoy retirement. I work in the community. I do a lot of stuff. Basically, I sit here and enjoy my little business.”