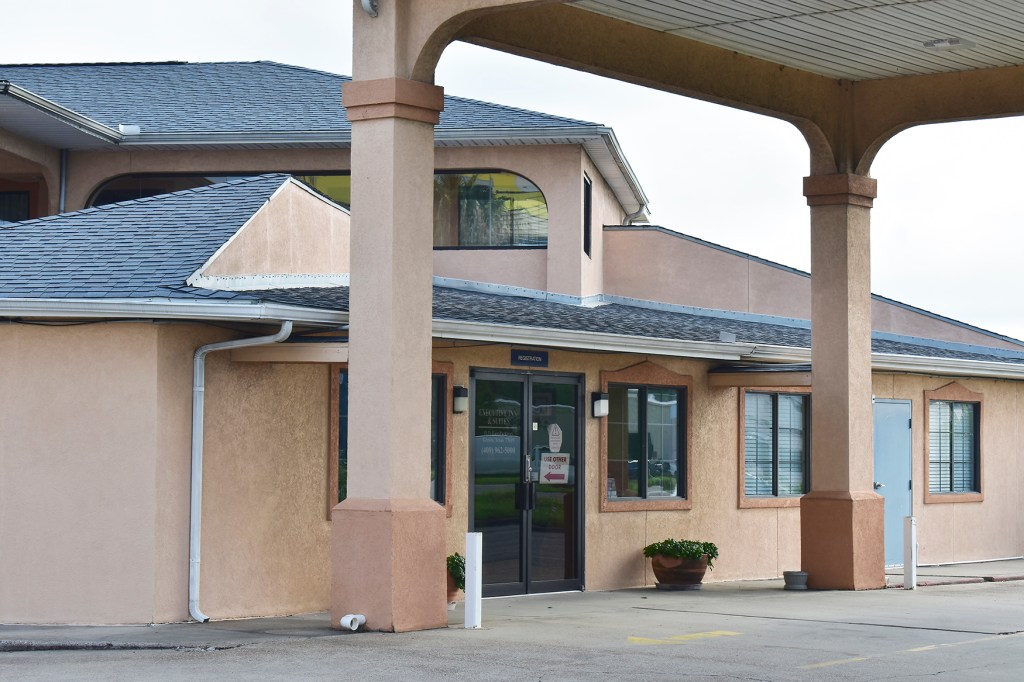 GROVES — An African American motel guest who ran into racist markings in the mirror of a room she was renting Friday said she plans to file a lawsuit against the establishment for emotional distress.

Kait Hines, 27, of Houston told Port Arthur Newsmedia on Tuesday afternoon she believes a staff member who was in charge of Executive Inn and Suites on East Parkway Street that day was aware of the graffiti, which included the n-word and a drawing resembling the logo of the Schutzstaffel, and put her in an uncomfortable position.

The Schutzstaffel was a Nazi paramilitary unit under Adolf Hitler.

Hines is a hairstylist who rents a booth at a Port Arthur barbershop each weekend and owns a business called Simply Kait Braiding and Weaving LLC.

She photographed the markings and posted it along with the motel’s information on Facebook, along with a 13-minute, 30-second video mostly of her exchange with a staff member who indicated she was in charge that day.

The video has drawn at least 2,300 views through Tuesday afternoon.

Hines left and stayed at a Port Arthur hotel after viewers, she said, told her to leave Executive and donated money through Cash App. She confirmed she received a refund from Executive on her purchasing card a few days after her arrival.

Asked if she has found a lawyer, Hines answered: “I’m still searching for a lawyer who does business litigation.”

Executive owner and manager Mikey Sangdod told The News in a previous article a housecleaner who doesn’t understand English well tried to inform the head of housekeeping of the markings, which were discovered on a tall, skinny mirror located behind the door of the motel room.

Sangdod said the head of housekeeping looked at a giant vanity mirror above the sink and saw it was clean, but did not check the mirror behind the door.

Sangdod, who said he was out of town Friday, alleges either a visitor or customer previous to Hines’ arrival made the markings and said he reviewed property video from the night before.

Hines believes lots of questions linger from the incident.

“The lady knew it was writing on the mirror and they couldn’t get it off,” she said of the staffer in charge. “Why was it still rented to me as a customer? It’s still so many questions there. The fact she informed you she couldn’t get the markings off, it was on your part that you made sure you got it clean before you rented it to a customer.

Sangdod called the error “an oversight on cleaning, not a personal attack on our part.” The defaced mirror was cleaned right away and believes an industrial grade permanent marker was used for the graffiti rather than lipstick, as he originally thought.

Sangdod said he has not seen Hines’ video, only the post with the picture of the defaced mirror and motel info. He blamed a flood of threatening calls to the motel office on that.

“We had it where a few customers came and acted like they wanted to purchase the room, they took a look at the room, and they said, no, never mind,” Sangdod said. “We kind of feel like it was related to the incident.”

Sangdod said he filed no-trespass and do-not-rent notices with Groves Police, but did not file charges because the person who defaced the mirror could not be identified. Groves Police say they do not have the filings, and Sangdod believes it’s because he has not pinpointed the person who allegedly made the markings.

Hines, a single mother of two, traveled by herself. She said the incident was her first up-close encounter of racism.

“I just want the situation to be resolved,” she said. “The reason why is to make aware to other black customers of the racism in Groves for the safety of others.”

Sangdod, a native of India, has denied racism on the part of his staff and said he can relate to experiencing racism in Southeast Texas.

Groves Police Chief Deputy Kirk Rice said the department has not responded to calls of racist graffiti in recent memory, but cautioned he’s not saying such acts have not happened.