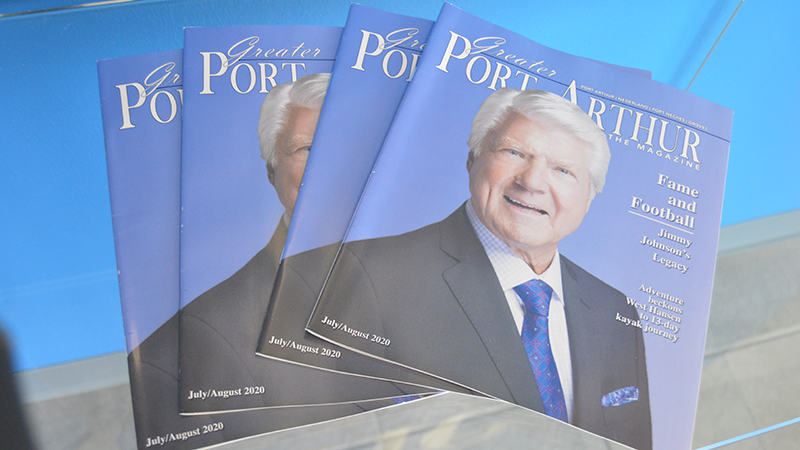 I was lucky to share in this space last week about my interactions with longtime Port Arthur high school band director Artemus W. Hancock Sr., a distinguished educator who’s story is featured in the current edition of Greater Port Arthur The Magazine.

The article on Mr. Hancock is one of many featured in our signature July/August 2020 edition.

Each story illuminates a special person from our community making impacts that stretch nationally and internationally.

Take the story of West Hansen.

Yet, West is a citizen of the world. The man is always on the move. It definitely seems he has the perfect name.

The explorer, adventurer and writer is at home with nothing but a backpack full of clothes, a Subaru hitched with essentials and a kayak strapped on top.

His latest adventure — kayaking the Texas coast — was completed this summer. His stories of past accomplishments and plans for more are thrilling.

Another Greater Port Arthur The Magazine spotlight focuses on the impact of Marjorie Cole.

Fans of music know the name, more importantly, they know her passion.

Cole spent a total of 40 years as choir director at Port Arthur’s three high schools — Abraham Lincoln, Thomas Jefferson and Stephen F. Austin — and an additional seven years as supervisor of fine arts, which included physical education and health. The majority of Cole’s career was at Lincoln High School.

“My success is because of the students I had, the support from the parents, the support from the administration, from the principals on up or the superintendent on down, the school boards,” she said. “It was God who sent me here. I had the opportunity to go elsewhere but when I was finishing my courses at Prairie View, I still had student teaching to do.”

We are all a lot better for it.

And how could we forget James William Johnson?

Known locally and the world over to football fans, Jimmy Johnson recently learned he would be inducted into the Pro Football Hall of Fame.

Originally scheduled this year, the induction ceremony has been pushed to 2021.

Johnson’s love affair for football began in a city rich in the gridiron tradition.

Thomas Jefferson High had won two state championships and 12 district titles before Johnson enrolled there in 1957.

“He was a great coach,” Johnson said. “He was an assistant for Bear Bryant at Kentucky. That tells you a little bit. But [he was] a demanding disciplinarian.”

A special thanks goes out to Johnson and fellow NFL legend Terry Bradshaw for taking time out of their days to interview with Greater Port Arthur The Magazine for this in-depth look at a coaching legend with humble roots.

We are blessed with many noteworthy individuals with ties to Port Arthur and surrounding communities. It’s our pleasure to share their stories with you, our community.