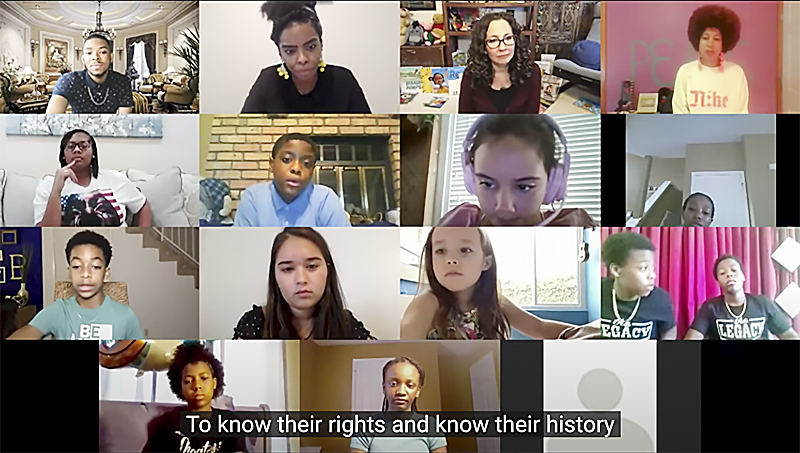 A screenshot of a panel discussion entitled “What Just Happened” hosted by Port Arthur native and casting director Whitney Valcin, second from left on top row. To the left of Valcin is Taylor Getwood of Port Arthur. Vivien Lyra Blair is second from right in the third row from the top. (Arts in the South)

Eight-year-old Vivien Lyra Blair caught the attention of adults and fellow child actors alike by asking this “hard question” during a Zoom conference:

“So, I want to know, to those people who have been mean to black people, what happened to you?”

The young actors seemed to listen intently, while the adults reacted in astonishment. Taylor Getwood, 18, of Port Arthur softly clapped for the co-star of the Netflix film Bird Box, which starred Sandra Bullock.

That moment in an online discussion fittingly enough entitled “What Just Happened?” went viral on social media and was picked up on major media sites. Whitney Valcin, a Port Arthur native who works as a casting director and film producer, organized the kids’ panel through her company, Arts in the South.

The discussion allowed child actors, including This is Us’ Makenzie Lee Foster and Family Reunion’s Isaiah Russell-Bailey, to take part in an ongoing conversation about racism in today’s society, more than a month since the fatal arrest of George Floyd in Minneapolis sparked worldwide outrage and highlighted acts of police brutality.

“I noticed they were left out of the conversation,” Valcin said. “I knew some of the kids feel bad about some things. So, I wanted to hold a panel with kids around the world and listen to kids ask questions and express themselves.”

Those who watched the panel on artsinthesouth.com had to opportunity to ask questions as well. But Vivien didn’t hold back in calling out those who offend Black persons.

“It’s a hard question because if they’re posting ‘Black Lives Matter’ on Instagram but they’re still calling people the n-word — if you know them — I feel like, you have to stop them or confront them,” Vivien said in preference to her viral question. “What my mom and I are saying is, there’s this phrase called ‘Hurt people hurt people.’”

“I thought it was magnificent,” he said. “It took me for surprise when we were on the chat. When I first heard all these kids speak, they are all extra intelligent. I was really surprised with their words and knowledge. It was beneficial to me to hear we have kids who can express their concerns in an intelligent fashion. They are not just leaders but pillars in the community and have made it in the entertainment business.”

Arts in the South is Valcin’s way of reaching out to kids from Southern cities including Port Arthur who are interested in breaking into the film and entertainment industry. She believes many youngsters from the South have artistic talent but believe they have to come from media markets such as Los Angeles — where Valcin lives — to break into the business.

“As a casting director, I assist with getting actors in TV and film,” Valcin said. “We’re teaching the kids what we know, like how do we case kids for a Disney show?”

Arts in the South offers virtual classes during the coronavirus pandemic on its website, artsinthesouth.com. A class on basic sign language and merging it with social media was held Friday afternoon. Past classes covered self-confidence for acting and learning Mandarin.

Each class costs $10 or less for now, Valcin said.

Adrienne Lott, now a counselor in the Port Arthur Independent School District, taught Valcin in video production at the former Ozen High School in Beaumont and likes Arts in the South.

“I think it’s incredible,” Lott said. “[Valcin] has really soared in her career. A lot of people feel like Port Arthur is a small town, and to make it big, you have to be from Los Angeles or New York to make it big in television and films. I know how hard it is to get a foot in the door. It’s not always about what you know; a lot of times, it’s about who you know. Her connections are far more than anyone can imagine. But I’m not surprised because she’s a dedicated student. She planned her productions very well, and you can tell she has a gift for the industry.”

Valcin credits much of her work to Lott, calling her an African American leader she looked up to in the community. Following high school, Valcin went on to Savannah College of Art and Design and has worked with Tyler Perry Studios, BET and Miramax.

Getwood has goals similar to Valcin’s of bringing the Hollywood experience to Port Arthur once he graduates from Texas Southern University, where he’s enrolling as a junior.

“She has become my big sister from another mother,” Getwood said of Valcin. “Her story is so much like mine as far as education and school and wants and passions, which is the arts.”