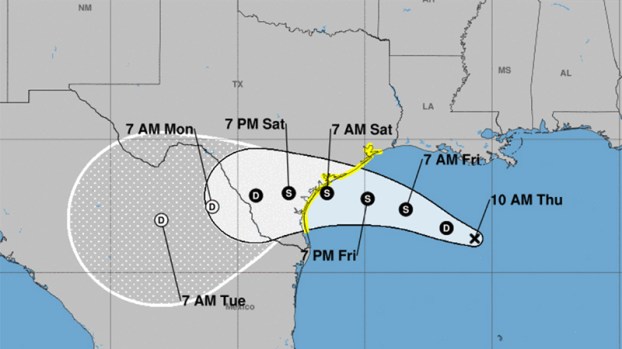 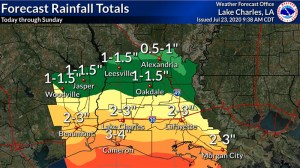 “It could become a tropical storm before landfall along the central Texas coast on Saturday,” Warning Coordination Meteorologist Roger Erickson said.

“A tropical storm watch is in effect from High Island south along the Texas coast.”

Southeast Texas is expected to see wind gusts of 20 to 40 mph in the strongest rain bands.

The forecast calls for the storm to move west to west-northwest across the Gulf of Mexico with landfall projected to the central Texas coast on Saturday.

“Some places along and south of the I-10 corridor of southeast Texas and southwest Louisiana could see 2-4 inches through Sunday,” Erickson said. “Expect flash flooding during the heaviest rain.”

Tides are running a foot above normal and could increase.

The Coast Guard is urging the maritime community and boating public to prepare for the arrival.

The storm is expected to strengthen to tropical storm force winds and bring heavy rain to portions of the Texas coast, resulting in flash flooding. A tropical storm watch has been issued.

Stay off the water. Hurricanes and tropical storms can be deadly and the Coast Guard’s ability to conduct rescues can be diminished or non-existent at the height of a storm. Be prepared, stay informed and heed storm warnings.

Owners of large boats are urged to move their vessels to inland marinas where they will be less vulnerable to breaking free of their moorings. Mooring lines should be doubled in case of high winds. Boats that can be trailered should be pulled from the water and stored in a place that is not prone to flooding.

Those who are leaving their boats in the water are reminded to remove EPIRBs and to secure life rings, life jackets, and small boats. These items, if not properly secured, can break free and require valuable search and rescue resources to be diverted to ensure people are not in distress.

The group of storms in the Gulf of Mexico, known as Invest 91L, is a broad low pressure area in... read more