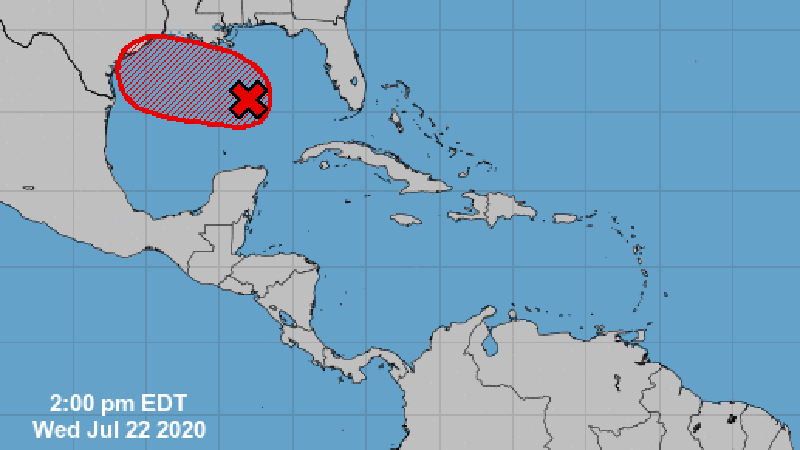 The group of storms in the Gulf of Mexico, known as Invest 91L, is a broad low pressure area in the central Gulf.

Weather officials said it could become a tropical storm before landfall along the central Texas coast on Saturday. A tropical storm watch may be issued later Wednesday night or Thursday for parts of the Texas coast.

Locally, the main weather threat is heavy rain. Some places along and south of the I-10 corridor of Southeast Texas and Southwest Louisiana could see 4-6 inches through Sunday.

Tides are running almost one foot above normal. This could increase to over one foot by Thursday or Friday and a coastal flood advisory may be needed.

“The National Hurricane Center has increased the chances for tropical development in the Gulf of Mexico to 80 percent,” Roger Erickson said. “A tropical depression could form any time, and watches or warnings may be necessary for the Texas and/or Louisiana coast as early as (Wednesday) afternoon or evening.”

Erickson, a warning coordination meteorologist with the National Weather Service, announced the update at 1:26 p.m. Wednesday.

National Weather Service Meteorologist Rob Megnia told Port Arthur Newsmedia Wednesday morning he was reluctant to forecast a storm landfall time because it was still just a mass of disorganized moisture. The storm has shown a pattern for organization in the hours since.

Southeast Texas and Southwest Louisiana residents are going to see increased rain over the next five days. Total rainfall could reach five inches over that time, with locally higher totals possible.

This wave will likely bring widespread showers and thunderstorms to the area through the weekend.

Gov. Greg Abbott urged Texans to remain vigilant and closely monitor weather conditions as a tropical development in the Gulf is expected to impact parts of Texas this weekend.

He said the storm may lead to dangerous flash flooding, especially in the upper Rio Grande Valley, the Coastal Bend and the Texas Hill Country. The Governor is also preparing state resources to assist communities with potential flooding and heavy rainfall.

“I urge Texans across the state to monitor the weather in their area and take necessary precautions to protect themselves and their loved ones from possible flash flooding and heavy rainfall,” Abbott said. “As this tropical disturbance approaches Texas, we are taking several precautionary steps to prepare resources for our communities, and we will continue to monitor and proactively respond to any developments.”