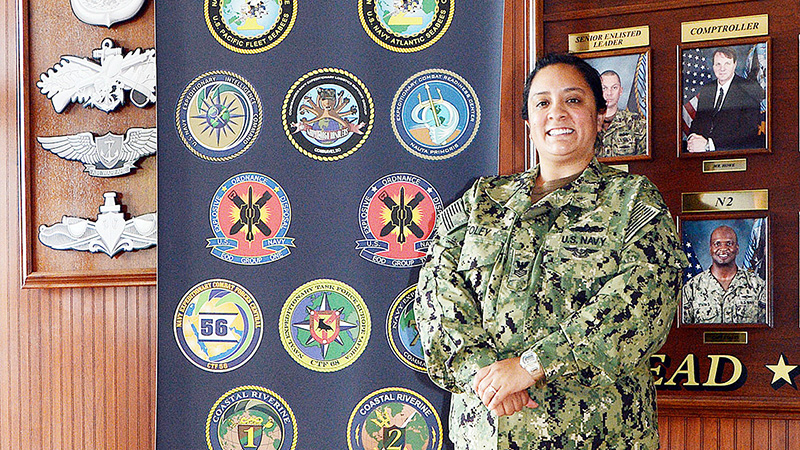 Veronica Foley, née Melendez, who was born in Port Arthur, serves today in the United States Navy, just like her father before her. (Photo courtesy of the U.S. Navy)

Foley was born in Port Arthur. Her father served in military, so they moved around a lot, but her family now resides in Beaumont.

Today, she works for the Navy Expeditionary Combat Command, which is responsible for organizing, manning, training, equipping and sustaining the Navy Expeditionary Combat Force to execute combat, combat support and combat service support missions across the full spectrum of naval, joint and combined operations, which enable access from the sea and freedom of action throughout the sea-to-shore and inland operating environments.

Foley provides human relations support to all the sailors at her command.

“I prefer taking care of people,” she said. “I am in a position to help sailors personally and professionally.”

Foley graduated from Manchester Township High School in Lakehurst, New Jersey, in 2005. She earned an Associate Degree in General Studies from Central Texas College in 2017 and is working on her Bachelor’s Degree in Human Resource Management with University of Maryland Global Campus.

The Navy Expeditionary Combat Force is comprised of sailors skilled in a diverse set of specialized capabilities.

These expeditionary sailors support the U.S. Navy while serving as members of Coastal Riverine and Naval Construction Forces, Explosive Ordnance Disposal and Diving and Salvage Units; and as part of expeditionary units that provide unique intelligence and logistics capabilities.

“My favorite part of this job are the sailors,” Foley said. “I love teaching them skills to better themselves that they can then pass along to their future sailors.”

According to Navy officials, maintaining maritime superiority is a vital part of a Navy that is present today and prepared for tomorrow.

The impact affects Americans and their interests around the world, as more than 70 percent of the Earth is covered by water and 90 percent of all trade travels by sea.

The foundation of the Navy the nation needs includes a focus on warfighting, warfighters and the future of the fighting force.

“I am confident that we will maximize the Navy we have today while delivering the Navy that our nation will rely upon tomorrow,” said Adm. Mike Gilday, Chief of Naval Operations. “We will do so with urgency. Our fleet will be a potent, formidable force that competes around the world every day, deterring those who would challenge us while reassuring our allies and partners.”

Serving in the Navy is a continuing tradition of military service for Foley, whose father served in the Navy.

She is honored to carry on the family tradition.

“I always knew I wanted to be like my Dad when I grew up,” Foley said. “He’s the reason I enlisted.”

As a member of the U.S. Navy, Foley, as well as other sailors, know they are a part of a service tradition providing unforgettable experiences through leadership development, world affairs and humanitarian assistance.

“The Navy is everything I thought it would be after watching my Dad over the years,” Foley said. “He set me up for success and didn’t even know it.”