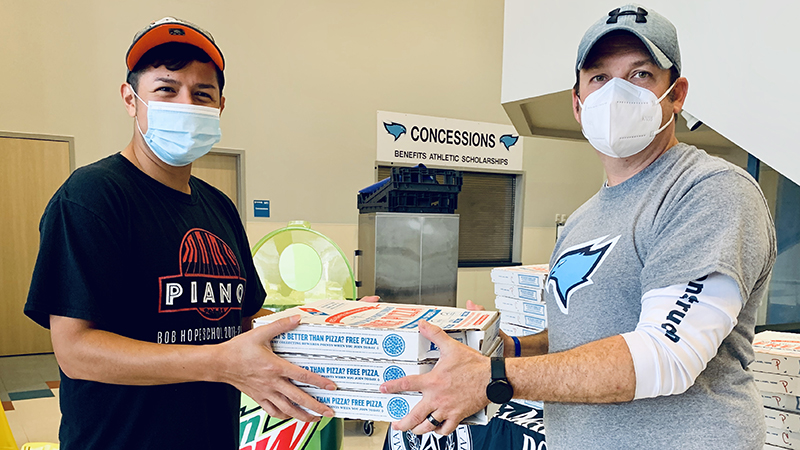 A gaggle of local volunteers delivered a total of 102 pizzas to Port Arthur and Beaumont’s homeless communities Friday.

The event, organized by the Tant family, was another way to give back to the cities’ most vulnerable population.

Tant and his family struck a deal with local Port Arthur Domino’s manager Todd Tarhan to provide the pizzas at $5 a piece.

Tarhan said it was an honor to be a part of it. 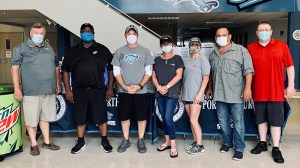 “It’s for a good cause,” he said. “To be able to be a part of it, and offer the opportunity, it’s great. It also presents a certain honor to me, because when (Joe) talked to me he was with Scott (Street, Lamar State College Port Arthur athletic director) and he spoke highly of our business and our interactions. That let me know that we were servicing them well and that’s an honor.”

More than $600 of left over funds went into purchasing $10 Domino’s gift cards to give out for next day meals.

Saddiqa Swati said whenever the pandemic hit Southeast Texas, the distribution company switched to mask production to fill the need.

“We weren’t doing PPE, but we had an influx from employees, businesses and communities that needed it so we adjusted to that,” she said. “I had a bunch of masks I’m selling so when Joe (Tant) said he was giving away the pizzas, I thought it would be a good idea to donate the masks.”

Swati said it’s important to bring awareness of the pandemic to the homeless communities.

“Homeless people interact with others and I don’t know if they can easily get masks so this, for me, is a step in the right direction,” she said. “It brings an awareness to them and offers a product that everyone should have a right to.”

More than 65 personal fans and 200 bottles of water were also offered on Friday. 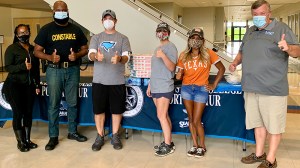 Street helped coordinate the event at the Carl Parker Center for a point of contact.

“Lamar State College athletics has a history of community service,” Street said. “Our student athletes aren’t on campus right now, but that doesn’t mean we stop caring for our community. The Tant family identified an important issue and we want to support what their goals are and continue our mission.”

Roughly 35 volunteers showed up at the Carl Parker Center for delivery.

“Joe Tant reached out to me and, of course, Nance is always looking to help communities,” Walker said. “Unfortunately, we don’t always have the time because we are so busy, so we decided we finally need to make time.

“It’s very easy to donate money, but to take time out of your day to see what’s going on in your community, that’s what makes a difference.” 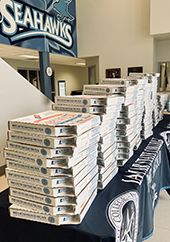 More than 100 pizzas were delivered Friday to the homeless.

“Not all of us are as fortunate to have grown up with supporting parents and move on to a career,” he said. “It’s important for us to know where we came from. I had a very humble beginning and with education and effort I’ve been able to get to where I am now. People are going through struggles and you need to thank God if you are blessed through these times. That’s why it’s so important to give back.”

Volunteers scattered through Port Arthur, Nederland, Groves and Beaumont to deliver a hundred pizzas in the rain in under an hour.

Many volunteers reported tears on both ends.

To all those volunteers, Tant simply wanted to say “thank you.”

“You have touched lives that in our community are not often touched,” he said. “We can go to the house and cool off, we can go eat at Taco Bell whenever we want, [but] they cannot. So a big thank you and hopefully we’ve done some good in our community.”

Tant said he is hoping to recreate the event again in October.