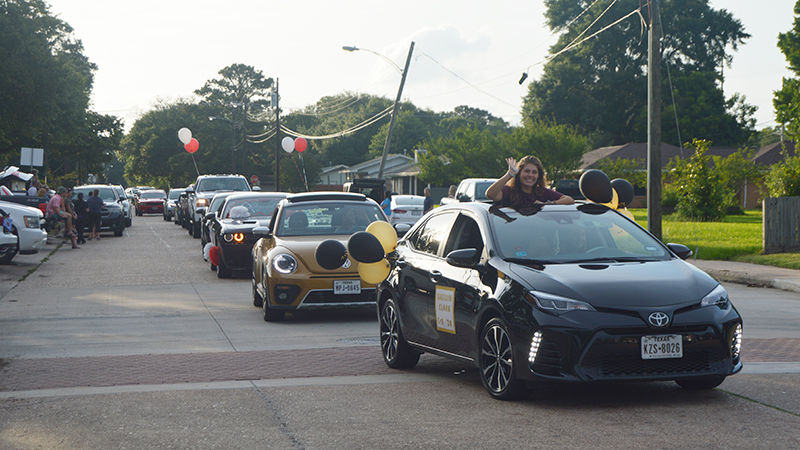 Nederland High School senior Kaitlyn Clark stands out of her car to waive to the crowd in May during a celebration in honor of graduating seniors.

Facing growing backlash from teachers, parents and health officials, Texas education officials Friday relaxed a previous order that would have given public schools just three weeks from the start of the fall semester to reopen their classrooms for in-person instruction.

School districts will be allowed to delay on-campus instruction for at least four weeks, and ask for waivers to continue remote instruction for up to four additional weeks in areas hard hit by the coronavirus pandemic. Local school boards in areas with a lot of community spread can also delay the start of the school year.

Last week, the Texas Education Agency had released more stringent guidelines requiring all school districts to offer on-campus instruction five days a week for all students who want it, except for a transition period of three weeks at the start of the school year.

Districts that offer 100% virtual instruction must provide devices and WiFi hotspots to students who need them. Students who do not have access to technology must be allowed to learn in school every day, according to the guidelines.

Gov. Greg Abbott and top state officials also announced Friday that they will funnel $200 million of federal stimulus funds to the agency to buy devices, hotspots and routers and distribute them to school districts.

That’s on top of a previous promise to reimburse all school districts for up to 75% of their pandemic-related expenses, using money from a federal grant awarded to Abbott’s office. The state used a larger $1.29 billion federal stimulus package to bolster its own coffers, instead of providing it to districts on top of their full funding this year.

School districts may also, with permission from the state, choose high schools where students will receive part of their instruction on campus and part remotely at home for the entire school year. Students must learn on-campus for at least 40% of the days in each grading period, usually six or nine weeks long.

“Our framework ensures that there will be on-campus instruction available for all students who need it in Texas. But at the same time we know we need to provide local schools flexibility to adapt to local health conditions, especially given the rise of COVID cases that we’re seeing across the state,” he said in a video address to parents and teachers.

While statewide guidance was in flux, local health officials have been issuing mandates barring in-person classes for public and private schools in their jurisdictions, at least through August and in some cases to the end of September.

It was unclear last week whether Texas would let those local mandates stand or overrule them. But the TEA confirmed to The Texas Tribune this week that it would continue to fund school districts that didn’t open classrooms due to a local health mandate, as long as they were remotely educating all students.

Dallas County was among the latest to issue such a mandate for its public and private schools, including Dallas Independent School District.

And many Texas school superintendents in areas with rapidly increasing COVID-19 cases, hospitalizations and deaths have already made the decision to keep classrooms closed, without a local health order, and continue with online learning this fall. Houston ISD, the state’s largest district, will offer virtual education for six weeks through mid-October. Northside and North East ISDs in San Antonio announced Thursday that they will remain entirely virtual to start the fall semester.

This past spring, Texas school districts struggled to get set up for remote learning, with many lacking enough computers and WiFi hotspots to send out to students. A preliminary TEA report recently showed that about 1 in 10 students didn’t complete assignments or respond to teacher outreach during the pandemic, especially low income, Black and Hispanic students. Students in lower grades were less likely to be engaged with school than older students.

By Aliyya Swaby of the Texas Tribune, a nonpartisan, nonprofit media organization that informs Texans — and engages with them – about public policy, politics, government and statewide issues.

Judge Branick: Citing quarantine violators “not our desire” with…