NEDERLAND — Eight individuals have been arrested, many with ties to Nederland business Jake’s Fireworks, pursuant to a federal indictment that alleges drug and money laundering violations.

The defendants were arrested by a joint law enforcement task force Wednesday and will make initial appearances in federal court Wednesday and Thursday.

A ninth defendant is already in custody. 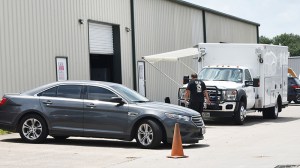 A DEA agent conducts an investigation today in Nederland.

The defendants are alleged to be the head of a Chemical Trafficking Organization cell operating on a national scale.

Investigation of the organization began in 2018 when the Drug Enforcement Administration intercepted mail parcels of a chemical identified as 1,4 butanediol, commonly referred to as “BDO.”

BDO is a chemical manufactured only for industrial or laboratory use as a floor stripper or vehicle wheel cleaner and is not intended for human consumption. Investigators determined when BDO is ingested, it immediately metabolizes into GHB (a known date-rape drug) with the same effects, causing potential overdoses, addiction and death. 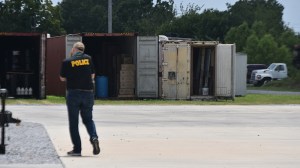 The business is located just outside the municipal city limits.

Agents determined that since 2016, Right Price Chemicals has distributed approximately 7,000 gallons of BDO over thousands of orders, and that those sales generated $4.5 million.

Agents additionally determined Jake’s Fireworks operated as a front for Right Price Chemicals, allowing individuals to purchase BDO on a walk-in basis. Customers could also obtain BDO from Jake’s Fireworks through internet orders, and have the chemical shipped to their home.

Investigators have also determined that proceeds from the distribution and sale of BDO, which total over $1 million, have been laundered through several bank and retirement accounts throughout Southeast Texas. Those accounts have now been seized.

If convicted of the criminal charges, the defendants face a minimum term of 20 years, and up to life, in federal prison.

In addition to pursuing criminal charges, on July 13, 2020, the Eastern District sought and obtained a temporary restraining order against Jake’s Fireworks and any other businesses housed within the Twin City Highway location in Nederland. This civil injunctive relief immediately shuts down operations of the business and any further distribution of BDO and other chemicals.

“I am proud of our team’s investigation and interdiction of this dangerous chemical trafficking organization,” Cox said. “The joint efforts of our Criminal and Civil Divisions led to the arrest of suspected drug traffickers, the seizure of bank accounts, and the shutdown of a suspected drug front, making the Eastern District of Texas a safer place for all.”

An indictment is not evidence of guilt. All defendants are presumed innocent until proven guilty beyond a reasonable doubt in a court of law.

“We’re very lucky no one was killed” – Armed…