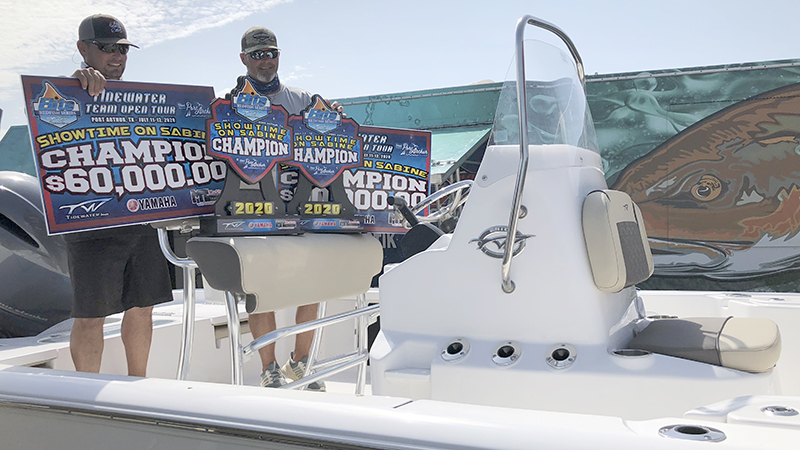 Travis Land of Seguin and Jimmy Lloyd of Lumberton are usually rivals at these sorts of fishing tournaments. But at the Elite Redfish Series’ Showtime on Sabine tournament, which took place at the Pleasure Island RV Park this weekend, the pair fished together for the first time.

“We’ve fished against each other for a long time,” Lloyd said. “We’ve been tournament fishing for years. In fact we’ve won our share of them but it was kind of cool getting in a boat with one of my adversaries for a while. It’s pretty fun.”

It was quite lucrative for the pair, too. Land and Lloyd finished Sunday with a brand new, 22-foot Tidewater 2110 Baymax boat with 200-horsepower Yamaha outboard motor and McClain custom tandem axle trailer, as well as $10,000 in additional prize money, all by winning the Showtime at Sabine tournament as well as the Big Bag and Angler Advantage side pot competitions.

The fishing itself was challenging. Cloud cover, wind and dirty, shallow water made for tough conditions, as nearly all contestants attested too.

“There’s the best of the best here,” Algueseva said. “We see that some of the guys struggled, and we got lucky enough to be able to pull it off a little bit, but we hope we’re in the top five.”
Pat Malone, event organizer and show host, said that a strong west wind drained a good bit of water, and with the water went many of the fish the anglers scouted earlier in the week.

“There’s excellent places to fish but the west wind blows the water out of them, just like draining a bathtub, and they can’t get in them,” Malone said. “A day or two ago, the fish start feeling that water go past their gills, and they’re not stupid, so they start moving out too. That’s just one of the conditions these pros have to battle out here.”

Several teams left Sunday without any fish to weigh, like Saturday’s leading anglers Lance Reynolds and Austin Angel. They ended the first day of the tournament with 25.98 pounds from three redfish. Reynolds and Angel were just 0.21 pound ahead of Land and Lloyd on Saturday.

Father and son team Mike and Luke Donewar had a difficult first day but managed to double their weight on the second.

“We’re just hoping to move up to the top 10,” Mike Donewar said. “We had a bad day one. We had fish, but it was just shallow. There was no water so we couldn’t get to them. We tried to make up for them today. We almost doubled our weight today from yesterday. It’s tournament fishing. Weather changes and water changes and it is what it is.”
Mike Donewar usually fishes with another partner, but decided to take Luke along this year. Luke is no stranger to fishing, however.

“I’ve been fishing tournaments since 2002 and he’s been fishing since he was 6 years old,” Mike Donewar said of Luke. “He’s not the average 10-year-old out there. So we do this on a regular basis, plus we fish every weekend and during the week also.”

For their part, despite the challenges during the tournament, Land and Lloyd still love the fishing on Sabine Lake.

Malone said that putting together the event in accordance with COVID-19 safety orders was also a challenge but is happy with the way the weekend turned out.

“It was pressure packed, having to keep a lot of safety precautions intact,” Malone said. “At the end of the day, the guys worked really hard at it. It was something new to them. Some of the anglers come from states where it’s not required so a lot had to go buy things because a lot of states they don’t have to worry about it. So we got on them and told them we needed to be safe and keep our distance and make sure we wear buffs when we couldn’t keep our distance. It’s such a sport that’s about camaraderie. I think once they got in the flow of it they became more conscious of it.”