Meet Groves’ newest firefighters, captain, who are ready to “help others” 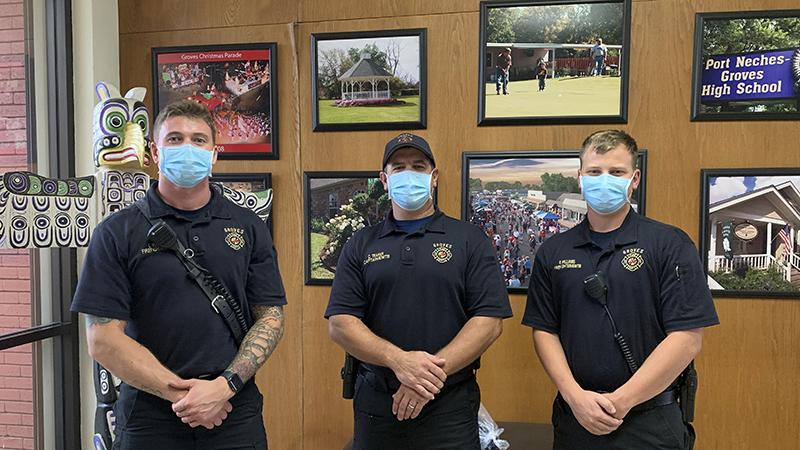 GROVES — Two new firefighters and a veteran firefighter who was recently promoted to the rank of captain were officially introduced to the public this week in Groves.

Cody Woodward was hired in March to fill the empty spot left with the retirement of former chief Dale Jackson.

Woodward served in the Army for four years active duty and has been in the reserves since then for a total of nine years.

He attended the Fire Academy at Lamar Institute of Technology in Beaumont, and Groves is his first fire department, Chief Lance Billeaud said.

The job of being a firefighter is something near and dear to Woodward.

“It’s something that aligns with everything I’ve done in my life, using my skills and abilities to help others, and it seemed like a good job,” Woodward said.

Ryan Williams attended the Fire Academy right after Hurricane Harvey when the Groves Fire Department hosted it. He has also served on the Deweyville Volunteer Fire Department.

After he graduated the academy, he had to complete an EMT class and wait for an opening. Then COVID-19 hit.

But now he’s where he wants to be.

Being a firefighter is a way to help others, be part of the community and build something better, he said.

C.J. Trahan as been with the GFD for 18 years and is someone who has been a good employee for the department, Billeaud said.

Trahan explained his reasons for becoming a firefighter: “To be a positive change in people’s lives during a time of need.”

Trahan is one of three captains at the station and his duties include overseeing the day-to-day operations from a shift standpoint, respond to areas of emergency whether medical, car accident or structure fires, not only in the city but at times of automatic aid with the cities of Nederland and Port Neches.

The fire captain penned a social media post with his background, saying his fire service journey began in 1998 as an active volunteer member of the Port Neches Fire Department. The following year he attended the Lamar Institute of Technology 55th fire academy while also being the recipient of the volunteer fireman of the year.

In 2001 he was given the opportunity to serve with the Groves Fire Department on a part-time status. The opportunity led to a permanent hiring in 2002.

In February 2020, he was promoted to Fire Captain. Through the journey he has been able to acquire a degree in fire science technology and a degree that blends the fire service with The Occupational Health and Safety Administration.