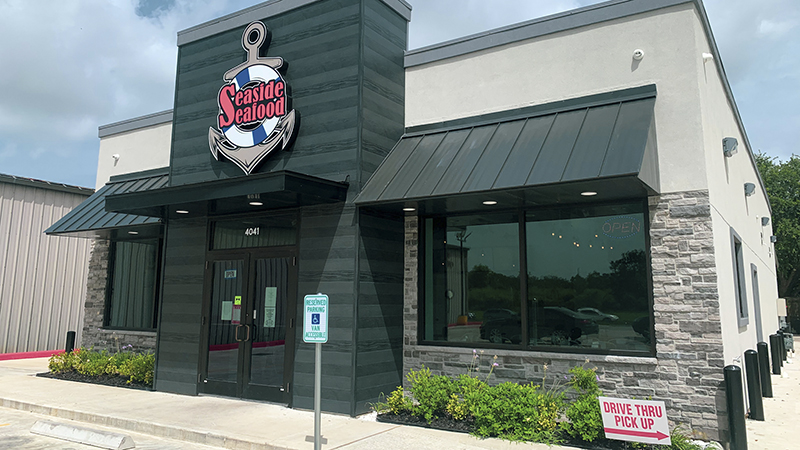 The Tran family, previously known for owning John’s Seafood, is rebranding and bringing the community’s beloved favorites back to Port Arthur.

Owners and brothers Danny and Jerry Tran opened Seaside Seafood off of Jimmy Johnson Boulevard on May 1. 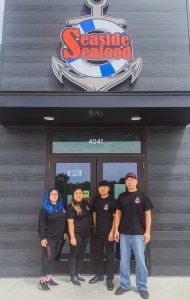 “We’ve been doing seafood for 30 years,” Le said. “It’s a family-owned business. We used to own John’s Seafood on Bluebonnet Avenue. We sold that recently and we wanted to open something bigger and newer.”

John’s Seafood, with locations in Beaumont, Austin, Louisiana and Port Arthur, was recently sold and transformed into Ann’s Kitchen.

The brothers took the old recipes, new ideas and opened the nautical-themed restaurant after their father to keep the tradition and legacy alive.

Le said he was a shrimper. 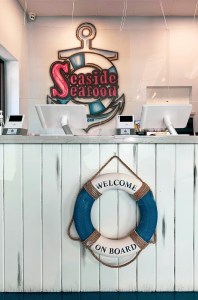 Seaside Seafood is prepared for the coronavirus pandemic by offering a clear shield between customers and employees at the front counter. (Cassandra Jenkins/The News)

“We’ve always had seafood restaurants,” she said. “We were at our old location for a long time, but it was time to move to a bigger building for our customers. The change is a shock for our old customers that have been coming to us for years, but they are starting to see we are just as good as we were before.”

The company rebranded to Seaside Seafood. Keeping the same blue color scheme, the restaurant went with a nautical feel to represent the family’s heritage.

“It took awhile to come up with the idea, but we wanted a seaside theme because it reminded (my uncles) of their dad’s old shrimper boat,” Le said. “We also added a lot of things to the menu. Everything is newer. We felt our customers deserved everything new. New food, new location, new building.”

The menu serves up the traditional platters, including fish and shrimp tacos, fried catfish, grilled shrimp and more. In honor of bigger and better, the menu also includes new items such as cheeseburgers, calamari and more. 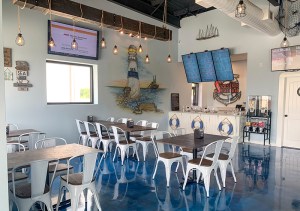 Inside Seaside Seafood is nautical-themed with the signature blue color of the former restaurant’s identity, John’s Seafood.
(Cassandra Jenkins/The News)

“We’ve been selling out like crazy,” Le said. “There is even a waitlist.”

Last Friday the restaurant’s waitlist for the seasoned, fresh crab was up to 90 people.

The BBQ crab is a specialty recipe served in a set of three, six or 12. The popularity comes from the freshness served in every meal. 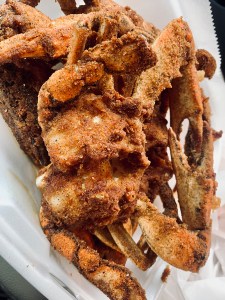 BBQ crabs are served in clusters of three, six or 12. (Cassandra Jenkins/The News)

Everything on the menu is caught locally in Louisiana waters and cooked fresh daily.

“One difference about this restaurant is we use real catfish,” Le said. “Nothing is frozen or imported. A con to that is that people can tell the difference when it’s real fish, but they are used to the frozen product so they make not like the taste or texture. The pro to that side is that it’s fresh filets of catfish. It’s unique.”

Seaside Seafood recently went back to to-go orders only in light of the rising coronavirus cases in the county.

The restaurant is currently open from Monday through Saturday 10:30 a.m. to 8 p.m. The mobile drive-thru is call-ahead only. Orders can be placed inside, but masks are required for entry.

Due to opening in the midst of a global pandemic, the restaurant did not host a grand opening, although one may be planned in the future.

Le said despite the absence of a grand announcement, the shop is doing well.

“I see a lot of new faces and I see a lot of old faces,” she said. “We are thankful that we have people come by. We are getting new regular customers daily. We are starting to know them by name like we did at John’s.”

As a traditional hotspot for locals on Bluebonnet Avenue, Seaside Seafood is hoping to bring familiar faces and new faces together.

“Down there at John’s I loved my customers,” Le said. “Getting to know my customers faces, names and families, that was their spot and we are excited for this to become the new ‘spot.’

“So to those that haven’t tried us yet, all the food is really good. Our old recipes are the same and our new recipes are great so come try the fish, shrimp and BBQ crabs.”

The Tran brothers thank the community for stopping by and flooding the new storefront with love and acceptance. Gratitude is also extended to the owner of the gymnastics building next door for allowing the family to build on part of his land.