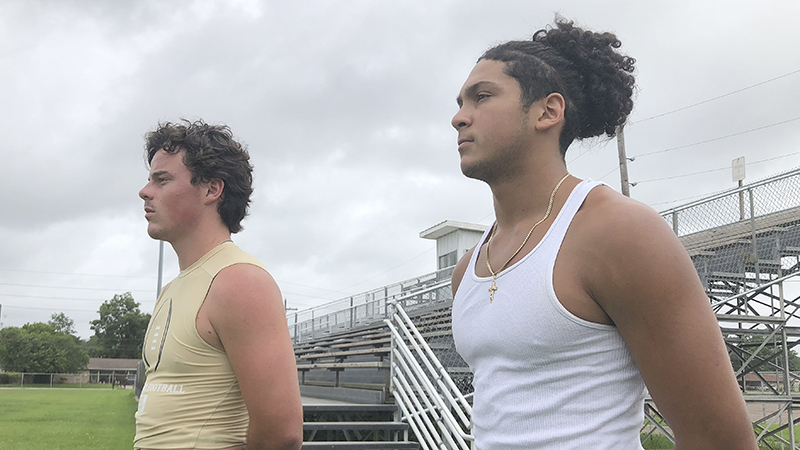 Corbin Chandler, left, and Rene Cunningham look out over the field while the Nederland offense conducts drills during summer workouts on Monday. (Brad Robichaux/The News)

Seniors Rene Cunningham and Corbin Chandler are in the running to replace Bryce McMorris as the Nederland Bulldogs’ starting quarterback, though there’s still a lot of work to do before any decisions are made.

“Really, it’ll be hard to tell until they get into a game situation, but it’s somebody that’s managing the offense efficiently, somebody that you can tell can exude leadership to where everybody is comfortable and confident in what he’s doing,” head coach Monte Barrow said.

The two players have both spent some time in their positions.

Cunningham, who last year played as a wide receiver and defensive back, played quarterback in middle school, while Chandler was the backup quarterback the previous season.

Cunningham has tried his hand in the position since a little before the start of summer.

“He has a good arm,” Barrow said. “He did some 7-on-7 one day out here before we went to spring break, and you can tell the clock in his head was ticking. There was no rush, and he knew how to get he ball out on time. He’s shown a real quick ability to grasp the entire offense, the run game as well. He’s an athlete so he can do that too. He’s not just going to sit in the pocket.”

Cunningham is confident about the direction the Bulldogs are heading, but is more reserved about his performance as quarterback.

“We’re going to have to see,” he said. “We’re not going to see until actual football comes up. I think we’re doing good right now. We’ll be ready.”

Chandler has played as a quarterback ever since he started playing football.

“I definitely learned a lot from Coach Barrow and watching Bryce play last year,” Chandler said. “I got to get sped up to the game and what it feels like to be that guy.”

Barrow says he’s spoken to both about the leadership requirements that come with being quarterback.

“Even defensive guys, they know that position is a position of leadership,” Barrow said. “It comes with too much credit and too much blame, both. They’ve got to be able to handle all those things.”

Chandler said that he and Cunningham will be able to be versatile in the role of quarterback.

“I definitely have a different style,” Chandler said. “Bryce was the kind of guy that would drop back and throw it, I think, exactly like Rene too, we can throw and run.”

McMorris left his successors with hefty shoes to fill. The recent graduate lead all quarterbacks in District 12-5A-II with 2,192 passing yards thrown and 16 touchdowns.

For the rest of the summer workouts, Barrow will be keeping watch over Cunningham’s and Chandler’s consistency and leadership qualities.

“We want to make sure they have a short memory,” he said. “We don’t want to have them throw a bad one and then mess the next one up mentally because they’re thinking about what they just did. Every day we’re looking for little nuggets of leadership and how the rest of the team responds to that.”

Barrow also can’t yet count out the talent of the rest of the underclassmen.

“We still have a couple of young guys that are working,” he said. “Who’s to say it doesn’t happen for them? You never know. For the past six months, ‘You never know’ is a good motto.”