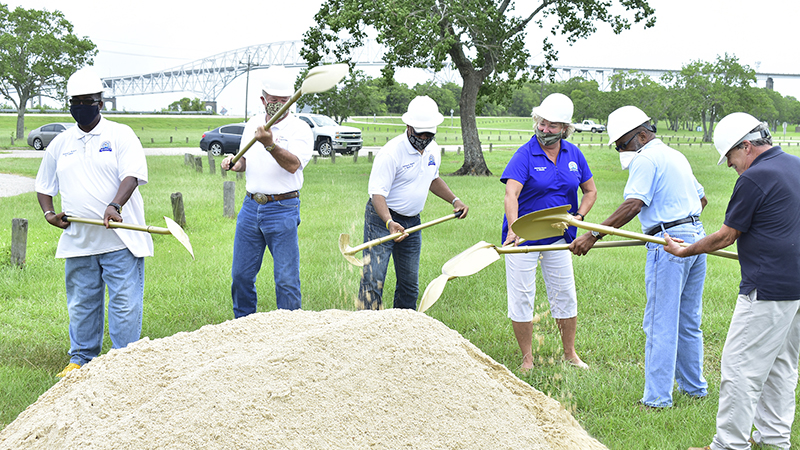 Work has begun on the installation of 14 cameras at entrance and exit points of Pleasure Island, which members of the recreational area’s commission hope give residents and visitors a sense of security.

The commission held a groundbreaking ceremony Monday, symbolizing the start of improvement and security measures at Lakefront Park, just under the Martin Luther King Jr. Bridge. Beard believes the installation of the cameras, including license plate readers and pan-tilt-zoom cameras, are the beginning of a number of Pleasure Island improvements.

“This is just the first stage to kick that off and give a sign to the community that we are interested and sincere about doing this,” Beard said. “A lot of people think the island has been neglected. I’m not going to say that, but there’s much more we can do. We can improve what we have and make it better.”

On Sept. 29, 2018, Kevin Nguyen, 33, was shot multiple times to death on North Levee Road of Pleasure Island while fishing.

A suspect in multiple attacks on May 5, 2020, was killed following a shootout between him and another man whom Port Arthur Police say was the victim in an attempted car robbery three miles east of Island Grocery on Texas 82 South. The suspect was linked to a robbery at Island Grocery.

“With a camera, we would have had pictures of all of this,” commissioner Ricky Reese said. “We would have had the license plate when he came in. The stolen car would have automatically registered on our cameras. It’s just something we felt we needed to get done.”

“The future of the island depends on people and families feeling safe and secure when they come out here so they can enjoy themselves,” he said. “All of our efforts are geared toward putting the “pleasure” back in Pleasure Island.”

The city has a cooperative agreement with the Jefferson County Sheriff’s Department, Texas Parks and Wildlife Department and local constables to monitor Pleasure Island in hopes of minimizing any problems, Beard said.

The camera installation, performed by Preferred Technologies, is just part of a bigger plan to enhance the area.

That plan, Beard added, includes enhancing The Palms at Pleasure Island golf clubhouse, bathroom facilities and picnic facilities. The Palms has not been operational since Hurricane Ike impacted the facility in 2008.

Another gazebo to create more shade is a possibility.

Improvement costs total approximately $350,000, which will come from the city’s general fund, according to Beard.

He said the Texas Parks and Wildlife Department has also issued a $400,000 grant to improve the boat launch and marina.

“We’re hoping one day Pleasure Island can convert into a multigenerational park for people of all ages to enjoy,” Beard said. “They run a half-marathon out here on this island. Well, we need an obstacle course where adults can come outside and do that.”

The groundbreaking was special to Reginald Trainer, who said he and his fellow commissioners fought to get the city council’s support for security upgrades.

“We thought we had it done, and then we wind up having another killing,” Trainer said. “We want the citizens in Port Arthur and everyone on the island to know that you can come back here and feel safe. Somebody is working on your behalf.”