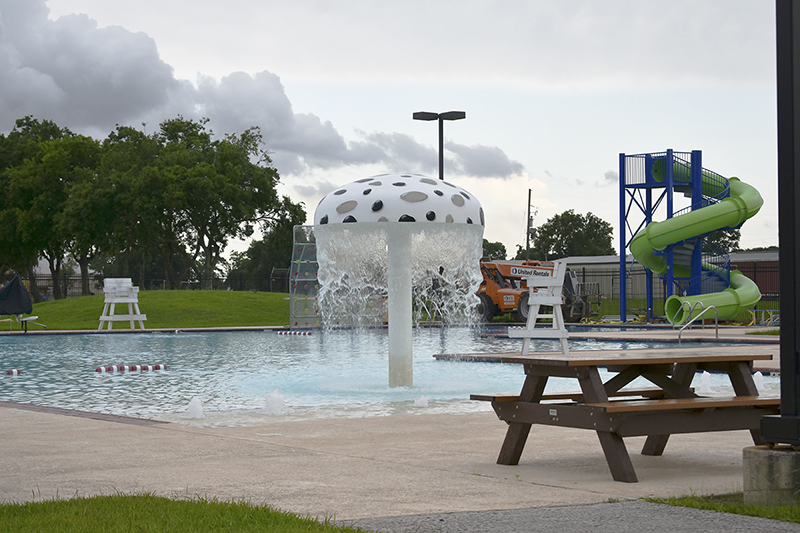 NEDERLAND — Possible exposure to COVID-19 as well as confirmed cases are impacting many aspects of Nederland, including the Nederland Police Department, the city pool and local businesses.

Police Chief Gary Porter said his administration received word that one of the officers tested positive for the virus on Saturday. This marks the first Nederland Police Department staff member to test positive.

Porter said the last time the officer worked was June 16. At that time he told staff one of his family members tested positive. By June 17 the officer started feeling ill as if he had a sinus infection.

He was tested Thursday and the results came in Saturday.

“We have not been exposed to him since (June 16) and so far no one feels ill,” Porter said. “That’s not to say that people are not exposed to other folks. We’ve gotten word that some of our people (residents) may have been exposed at churches and other places and are not showing symptoms.”

Porter added three officers are to be tested Monday (June 22).

NPD has continued with its protocol of sanitizing daily, checking temperatures when people come to work and sending those who have a fever or feel bad home.

Employees have been asked to limit travel if possible and be responsible about where they come and go.

The main thing: wash your hands and keep your hands off your face, Porter said.

City Manager Chris Duque said two employees at the city pool are being tested for COVID-19 as they had an outside-of-work potential of exposure. One had last worked on Friday (June 19) and the other on Saturday (June 20).

One of the pool opening safety protocols is constant cleaning of the pool facility and touch points, Duque said, which is why there is a 30-minute break during pool sessions and cleaning at the end of the shift to be ready for the next day.

“We didn’t feel the need to shut down (Sunday),” he said. “The nature of the individual’s job is such that it is possible for us to attack those potential touch points an clean efficiently.”

The pool is closed on Mondays and the schedule for the rest of the week is up in the air, as there is a forecast of rain and storms, he added.

In the last few weeks, two Nederland businesses temporarily shut their doors and are now reopened.

Carmela’s Mexican Restaurant, 1203 S. U.S. 69 in Nederland, as well as their Beaumont location shut their doors as an employee was exposed to a person who tested positive for COVID-19, according to a Facebook post by the restaurant.

The break allowed for cleaning and disinfecting.

On Monday, both locations reopened.

Duque said Sonic, 2205 Nederland Ave., had an employee test positive for the virus, closed and has since reopened.

The city was notified but it was not clear if the person lived in Nederland or worked at the business.

While two businesses reopened, the owners of Golden Croissant announced via social media it was temporarily closing Monday (June 22) due to the possible exposure of a part-time employee.

The employee, who had no symptoms when the post was made, is remaining in quarantine to self-monitor.

“At this time, no additional staff members are symptomatic of Covid-19 and there is no evidence of workplace spread, but we are requiring our team to get tested to be safe,” the owners said in the post. “We will not reopen until we have those test results, sanitize the business, and can move forward with certainty.”

As of Monday, Nederland has 31 positive cases, according to information from the city.

In a Facebook post by the city of Nederland, the number of cases was further broken down to reflect there being 13 active cases.

“At this time we do not believe these three new cases were part of the Mobile Testing Team site that operated at the NHF Pavilion on June 11,” the post stated.

With all that is going on, Duque said he sees the light at the end of the tunnel.

There is an emphasis on the public to do the basics stressed by the Centers for Disease Control and the federal government such as washing hands, wearing a face mask when in the public and social distancing.