Gov. Abbott: No immediate plans for 2nd shutdown of businesses 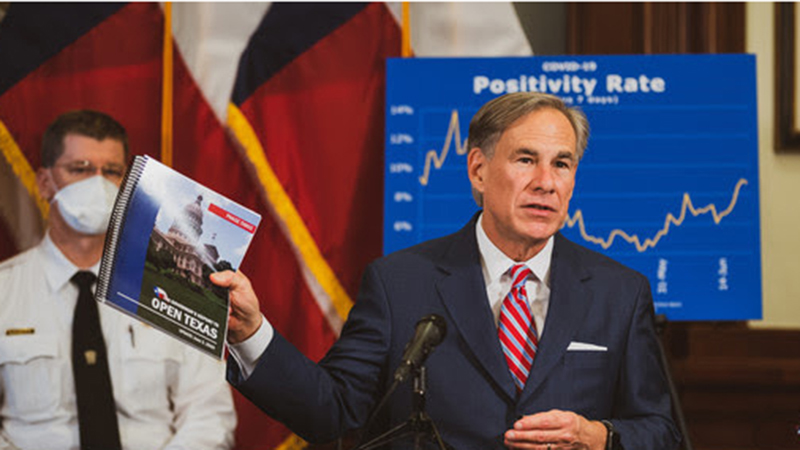 He was joined by Dr. John Hellersted, his medical point person for the pandemic, and head of the Texas Department of State Health Services, physician and former state Rep. John Zerwas, who is executive vice chancellor for health affairs of the University of Texas System and an Abbott adviser, as well as Nim Kidd, chief of the Texas Division of Emergency Management.

Behind them were large charts showing trend lines for hospitalization, daily new cases and the positivity rate. All showed a flattening until about Memorial Day.

Then came spikes on all three charts.

“To state the obvious, COVID-19 is now spreading at an unacceptable rate in Texas,” Abbott said, adding later “If those spikes continue, additional measures are going to be necessary.”

But he said he has no immediate plans for a second shutdown of businesses, saying “closing down Texas again will always be the last option.”

Abbott aggressively endorsed the use of masks by people in public settings. He mentioned an unnamed person in the hospitality industry who was did not want to wear a mask and said he told the person that doing so could make the difference between keeping his business operating or perhaps closing down.

The governor said the man came away convinced.

“When you go out, you should wear a face covering or mask,” Abbott said, adding later, “I also know that wearing a mask will help us keep Texas open.”

He said the more aggressive tone on masks now is because of the spike. No need to push it, he said, when the trend lines were flattening.

Hellerstedt said the spike in cases puts Texas “at a very crucial point in time.” He called on Texans “to recover what I feel is a sense of community,” when people seemed more agreeable to making sacrifices to limit the virus spread.

Nim Kidd, chief of the Texas Division of Emergency Management, said the state is in good shape when it comes to personal protective equipment, or PPE for short.

“We pushed out over 62 million masks to health care workers and first responders across the state. We have about 24 million in our warehouse inventory with another 96 million in route,” he said. “So for PPE shortages or concerns that are out there we need to make sure we are sharing those facts. There’s plenty of PPE in our inventory at this time. That’s one of the few times you’ve heard me say that.”

Abbott, meanwhile, alluded to the recent mandates by some local and county officials that businesses require customers to wear masks. But he remained steady in his position that a statewide mask-wearing order is not needed in Texas, where case levels vary from one region to another.

“What may be true in Austin, Texas, is different in Austin County,” he said. “And we need to have latitude for that differentiation.”

Abbott said he spoke last week with several hospital officials from around the state, including the urban centers were caseloads are the highest.

“I was assured and reassured consistently  by all the CEOs in all regions in the entire state of Texas they have the capability, the flexibility to ensure that anybody who tests positive for COVID-19 would have a bed available,” he said.

Looking ahead to the Fourth of July holiday, Abbott said local officials have the authority to limit gatherings if they see the need. Several local officials are doing just that, he added.

“The good news is, we are already seeing responses from local officials,” Abbott said.

Abbott also addressed recorded comments from staff members from the conservative advocacy group Empower Texans where they had mocked in sometimes vulgar language Abbott’s disability that requires him to use a wheelchair while deriding his response to the pandemic.

“It reveals a lot about an organization whose morals and character that they would use vulgarity to talk about someone in a wheelchair,” Abbott said. “I think the public should judge that organization and the positions it takes through the lens of the people who act that way.”