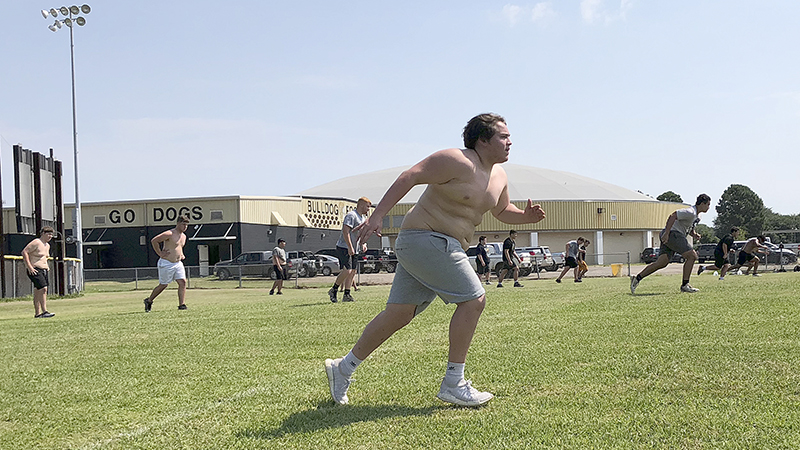 Memorial and Nederland high schools have had to temporarily suspend summer workout sessions for certain sports due to possible COVID-19 exposure since those sessions were allowed to resume on June 8, largely thanks to the procedures put in place to keep the student-athletes safe.

Matt Lewis, athletic trainer at Nederland, said he helped advise the coaches and school officials on how to craft those procedures.

“I think our first and main role was to help inform our coaching staff and our administrators of some of the procedural things that needed to be done,” Lewis said. “We looked at how we were going to screen our players before they came back to the workouts, helping the district decide what was the best way to do that and being up to date on what CDC guidelines and Texas Education Department guidelines were for schools.”

Ricardo Serna, athletic trainer at Port Neches-Groves, said that he and many other trainers have put in place policies to keep their interactions with students to appointments only and making sure to follow closely the guidelines set forth by the University Interscholastic League

“I think everybody is pretty much the same way as far as handling injuries by appointment,” Serna said. “We’re following what the UIL is saying and we’re going by what the UIL and CDC is saying.”

One other way Lewis helps is by providing an extra set of eyes to keep watch over players and monitor for symptoms, or even just to make sure players are maintaining proper social distancing practices.

“My role right now is oversight, we’ve educated the kids and coaches,” he said. “We’re here to help. If they’ve got questions and they need help we’ll help them, but I think for me at Nederland my role is more for oversight and a fill-in. If we’re short someplace I’m going to jump in and do that, and that’s kind of the role in most health-related things for athletic trainers in general. We’re supposed to help see those type of things going on, how can they get better, how can we intervene here and then try to teach people to do it themselves.”
Serna said since nearly all of the staff is helping out, there are plenty of people at PNG to keep tabs on the workout sessions.

“We clean the bars, we spray down the weight benches,” he said. “The coaches are doing everything as far as the sanitation goes, really and truly what we’re being told to do is what we’re doing. Our entire staff is up there working with the kids. There’s more than enough eyes and hands on deck.”

So far, one of the most effective practices put in place has been the limits on group sizes, Lewis said. When a Nederland football player had a relative that tested positive for COVID-19 the previous week, athletic director and head football coach Monte

When the player tested negative for the virus earlier this week, workouts were resumed. Workouts for other sports we not suspended, however.

“The thing that allowed us to continue to do some things was that we stayed in our small group,” Lewis said. “The 15 kids that were with that kid with the parent that tested positive, we were able to pull them away from everyone else until we got a negative test.

Another key goal has been to secure the cooperation of the players themselves. Serna said the players are receptive to maintaining social distancing, especially if it means they can keep practicing, though they may need reminding on occasion.

“We tell the kids that if they’re sick, running fever or feeling bad, just communicate and let the coaches know,” he said. “Don’t come and stay home. Be smart about it. And I think the kids are.