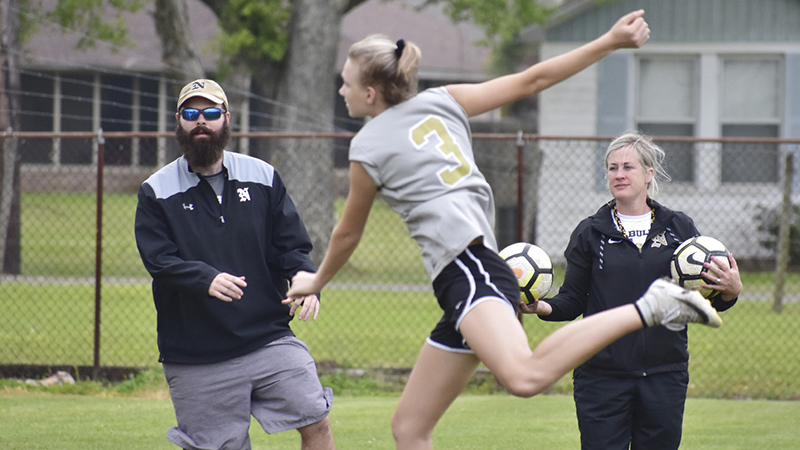 Nederland assistant girls soccer coach Anney Montalvo remembers when Aaron Tomplait approached her with a practice plan drawn out on paper, back when she was still coaching junior varsity.

Quite frankly, she had no idea what she was looking at on those pages.

“He said. ‘This is what we’re doing,’ and I said, ‘What do these dots mean?’ So that’s a joke between us,” Montalvo said. “Now I get what everything means. He helped me understand the game.”

Tomplait, the Bulldogs’ head girls soccer coach for the past three years, is departing to take the same position at West Brook. Team members say Tomplait will be missed in Nederland.

“He was a really good coach,” she said. “The girls truly liked him in general, and it’s going to be hard to replace him, I think so.”

Tomplait became Nederland’s head soccer coach for the 2017-18 season and led the Bulldogs in his first year to a 20-4-1 (12-2 district) season, sharing the District 21-5A title with Port Neches-Groves.

Tomplait led Nederland to the playoffs his first two years, making it to the area round in 2018 and the Region III semifinal in 2019.

Tomplait said his reasoning for the move was to gain more time with his family and young children, though it was a very tough decision to make.

“They’re young, and these are times I don’t want to miss and can’t get back,” he said. “The job at West Brook is going to give me more time to come home and be with them. With what I was doing at Nederland, there was kind of a long stretch where I didn’t have as much time at home. I still had time but being at West Brook is going to give me greater opportunities to be in my kids’ lives and be there for them.”

“I won’t have as many games or tournaments to go to, so there will be more time for me to come home and be with the kids and wife,” he said.

Senior Rylee Bolser, who played three years under Tomplait, said she and many of her players were sad when hearing the news of his departure but are happy he’s getting a chance to have more time with his family.

“I feel like he wouldn’t leave us if he didn’t think we could handle it because we’re still a strong team, and I feel like we’ll be fine without him, but everyone on the team is going to miss him because he was a big asset and took us really far for the three years he was here,” Bolser said.

Montalvo isn’t the only one who saw Tomplait as a big help in their understanding of soccer. Bolser said that she, too, benefited from his knowledge.

“He always wanted us to feel like we had a say,” she said. “He would ask us what we need to work on, and he knew, but he wanted to see our view of it, too. He always was nice to the girls, he helped everyone grow as a soccer player and as a person in general.”

Tomplait said it’s going to be hard not getting the chance to be there as the Bulldogs make their way through the next season.

“It wasn’t an easy decision by any means,” he said. “I told the girls, and it’s something I truly believed, this last year’s group was definitely one of my favorite groups to coach, and a lot of them are juniors and the idea of not being there for their last year, it hurt to think about that.

“Nederland was not a bad situation for me, so it was hard to make that decision to pull up my anchor and go somewhere else. My wife and I talked about it, we laid out every option and ultimately came to the decision that West Brook was something that could be very good for our family.”

Tomplait hopes his players will look back fondly on the time he spent with them.

“I hope that my legacy is that when my kids look back on soccer with me, it was good times, that we were competitive, that they had fun,” he said. “I hope it’s a memory that they can lean on, and maybe some life lessons along the way. I hope that’s what my legacy will be, providing the kids with something great that adds to their lives.”