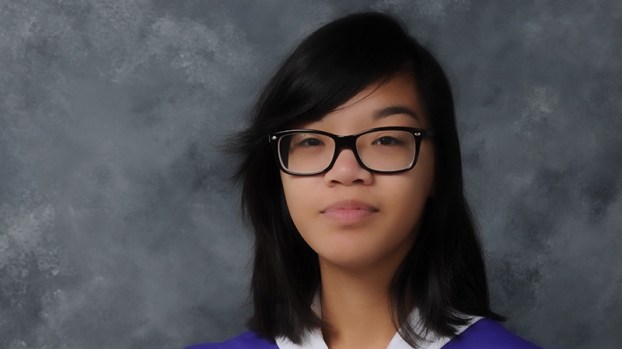 For senior Brooke Mi-Linh Pham, Thursday was a special night. The 18-year-old crossed the stage as valedictorian completing a third generation family tradition.

“It is an accomplishment and a dream fulfilled that I and my family are very proud of,” she said. “I wanted to make my parents proud and follow in my dad’s footsteps. He was valedictorian of his class in 1985. Both of my brothers also graduated in the top two percent from Port Neches-Groves High School.

Pham started aiming for the top spot by filling her high school curriculum with clubs, leadership roles and honor classes.

Her favorite program was band.

She joined because of her love of music. The competitions were a favorite part.

“We would compete with and watch other marching bands perform,” she said. “I met a lot of new friends, improved my musical skills and got to go on many fun trips to other schools and even march at Disney World.”

In the band program, Pham was section leader during her junior and senior year.

“It meant a lot to have others look up to me as a leader,” she said. “I hope I set a good example for the underclassmen of the band.”

“She was prepared daily, worked hard to get her part better and was encouraging to others,” Wells said. “Although we are going to miss her, I’m sure she will succeed in her chosen field.”

Pham’s calculus teacher, Jill Hamilton, said she enjoyed watching her grow over the past two years.

“(Pham) is smart, talented and resourceful,” Hamilton said. “Brooke is a great problem solver, handling both concrete and abstract concepts, and making it look easy.

“She is a hard worker. She sets goals, achieves them and surpasses them. I am looking forward to seeing what Brooke’s future holds as she sets her latest goals to using her superb natural intellect to make a positive impact on the world.”

Pham’s future is carrying her to Lamar University where she will major in biology with a concentration in pre-medicine.

Continuing in the footsteps of her elders, Pham’s dream of becoming a doctor is rooted in her family history.

“My parents are my role models,” Pham said. “They came to the United States with only hopes and now they are living the American dream. They have guided my two older brothers to become doctors of pharmacy, and I know that I will always have their unconditional love, guidance and support to become successful.”

The National Merit Scholar has been awarded the Cardinal Elite Scholarship, the Lamar Early Access Program Scholarship, her valedictorian scholarship and she is already accepted into the Reaud Honors College at LU.

Stepping into her role as the future Dr. Pham, the graduate is sticking to her motto — “Nothing in life is given.”

“The Class of 2020 had to endure a lot of turmoil,” she said. “I learned that humans endure. No matter what happens, we will always come through stronger and more resilient than before. Everything is earned through hard work, perseverance, dedication and support from one’s family.”