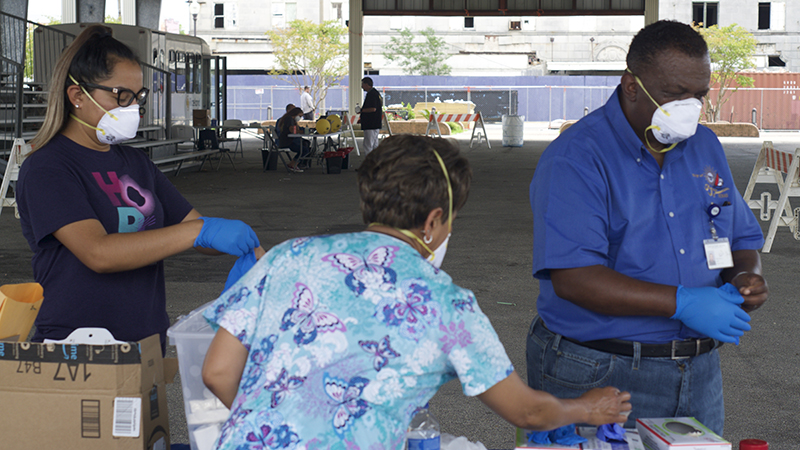 COVID-19 is continuing to spread as states get closer to full-scale reopening.

While the major jump came from a change in the health department’s prison reporting, Port Arthur and Mid-County now account for 146 of the positive cases as of Monday (June 15).

“It’s the general reopening of everything,” she said. “We definitely understand the desire to open places, but we did expect to see an increase in COVID cases. Some of it is because we’ve done more testing and more testing leads to an increase in reports.”

Port Arthur saw 10 new cases Monday, increasing its total to 95. Nederland increased by two to 17, Groves by one to 20 and Port Neches by one to 12.

Smith said the two entities tested close to 300 individuals during that time.

“We may have received maybe seven to 10 in that group that were positive so far,” she said. “We are still receiving those results from hospitals and private clinics, so we have not received all of those results yet. The majority of people are testing negative, but we are still seeing positives.”

Smith said the majority of people tested were Port Arthur and Mid-County residents, although a few Beaumont citizens did trickle in.

“Unfortunately, this is what we thought would happen,” Smith said. “I don’t expect it to stop anytime soon, especially not with testing continuing.”

The city of Nederland also hosted mobile testing on June 11 at the Nederland Heritage Festival pavilion.

Nederland City Manager Chris Duque said the results from the most recent testing would be released to the Port Arthur Health Department on Thursday (June 18) or Friday (June 19).

The majority of positive Port Arthur residents through June 12 were African Americans ranging between ages 31-40 and 51-60.

Groves and Port Neches residents with the highest tests were 41- to 50-year-old white citizens as of that date. Out of Nederland’s 18 positives, four were between the ages of 61-70.

Mid- and South County has sixth deaths, five from Port Arthur and one in Nederland. Two of the deaths were African American, three white and one Hispanic.

Smith said the safest practices continue to be social distancing and wearing facemasks.

“Social distancing and facemasks are not 100 percent, but it’s all we have right now until get a vaccine,” she said. “With people laying down their guard, we are going to see an increase.