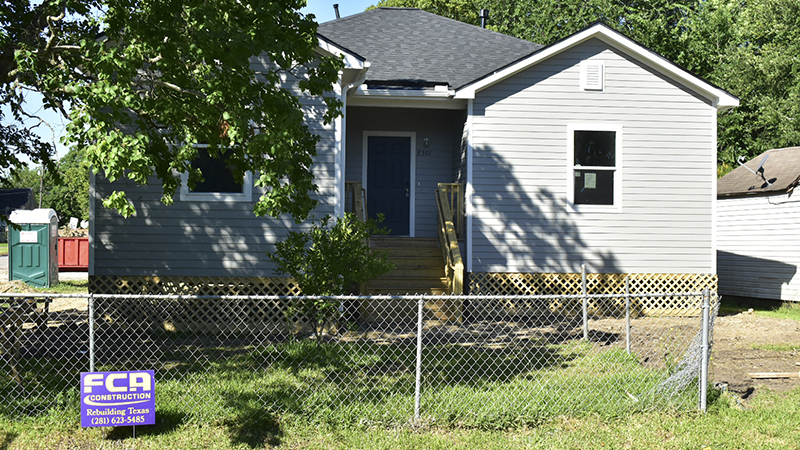 Building materials have been stolen from this home at 2301 Fourth Ave., which is being built through a Hurricane Harvey program under the Texas General Land Office. (I.C. Murrell/The News)

A project manager for a company that’s rebuilding homes destroyed by Hurricane Harvey is looking to put up security systems at job sites after a number of big money thefts.

“I’m trying to bring awareness to this problem,” said John McKitrick, project manager with FCA Construction. “We are here trying to put lives back together and it’s hard when other people are stealing or destroying. They are trying to take away someone’s livelihood as we try to build it for them.”

One of the construction projects located at 2301 Fourth Avenue has had a door, window and materials stolen from the site.

Windows used in the projects are high dollar items, as they are required to be shatter resistant and come in at approximately $300 each. Doors and other materials are pricey, as well, and one theft at a job site can run in the thousands of dollars, McKitrick said.

The project manager has been working in Port Arthur for six months and said the home building is part of a Hurricane Harvey program under the Texas General Land Office.

“I’m here trying to build homes for people and I have people stealing from inside; doors and windows, materials stolen out of the yard,” he said. “I have reported it to the police. I filed two reports in the last month.”

At one home under construction someone stole almost 50 gallons of paint and the attic ladder. The paint can’t be returned because it has been tinted, he said.

As for possible suspects, he has no idea. He speculates it could be another contractor or other individuals because it occurs in the middle of the night. He has had neighbors call and alert him, but there was no suspect description.

Once a house is nearing completion a lock box is placed at the site so the only way to get inside illegally through a broken window or door.

McKitrick said the thefts can push the finish date of the project back and jack up costs to buy more materials.

“I’m scared to buy materials for subcontractors because I’m afraid it’s not going to be there the next day,” he said.

McKitrick said he will be putting up security systems at the sites.

City Manager Ron Burton said he wants to reach out to McKitrick and see how the city and police department can help.

“We are partners in this,” Burton said of the rebuilding on homes, adding if McKitrick and the company are affected, it also affects the city and its citizens, who are ready to move back home.

Persons who see suspicious activity at job sites can call Port Arthur Police Department at 409-983-8600 or Crime Stoppers of Southeast Texas at 409-833-TIPS.