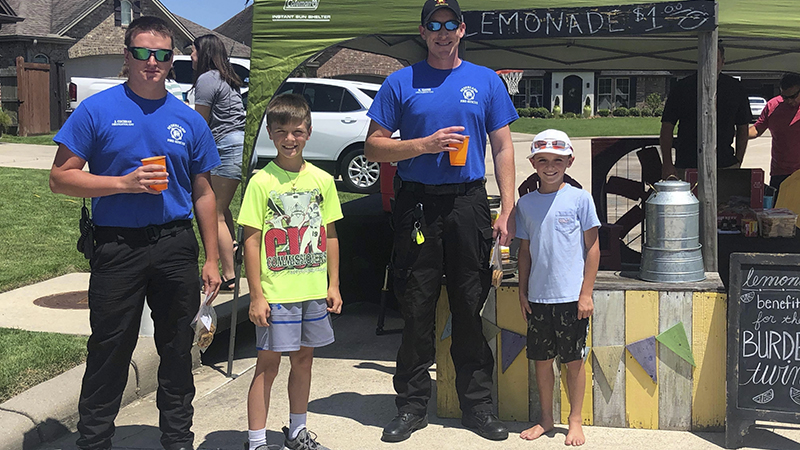 The twins’ lemonade stand attracted many community contributions, including those from Nederland firefighters. (Courtesy photo)

The 10-year-old boys stood outside their home on Shadow Ridge Drive Saturday from 2-4 p.m. with a tent, a table and a sign.

“Lemonade $1,” the sign read. “Benefit for the Burden twins.”

The Burden twins, sons of Hayden and Haley, were prematurely born at 23 weeks on March 23. Suffering from Twin-to-Twin Transfusion Syndrome, NEC (necrotizing enterocolitis) and other life-threatening diseases, the boys’ chance at survival after birth was low.

Miraculously, both pulled through and are currently going strong at two months and 19 days. 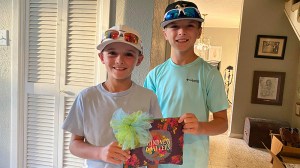 As twins themselves, Koby and Cooper heard the story and simply wanted to help out.

“We like helping our community and helping other people out,” Koby said, speaking for him and his brother. “We felt happy that we made all the money and excited to hand it over to give to the Burden twins’ mom and dad.”

The boys raised $800 during the 2-hour sale. The remaining $700 came from electronic donations made in the Burden name.

“I didn’t expect a whole lot,” Koby said. “I knew there was going to be some people, but not as much as we had. Maybe about half.” 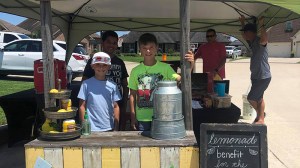 The Smith twins are well known for their roadside activism.

Koby and Cooper were 5 when they hosted their first lemonade stand.

Saturday’s sale was the fourth event Koby and Cooper participated in to raise donations for family and friends.

Their mother, Kara Smith, said every time the boys host a lemonade stand outside their house, they donate the money to someone in need.

“We had a neighbor down the street who had some heart complications,” she said. “He was in ICU and they decided to host the lemonade stand. They raised a lot of money from the neighborhood. The second one was their kindergarten teacher’s husband had cancer and they donated the money to them.”

The twin’s parents said they couldn’t be more proud of their sons.

“It’s heartwarming to know that they care about others.” Kara said. “We’re blessed and we just love to help everybody. I’m glad that they’ve seen that.”

Rallying behind both families, members of the community flocked to the lemonade stand. Some bought drinks. Others just donated to the cause.

“They wielded the lemonade stand,” Kara said pointing to her boys. “The community did the rest. I love our community. Anytime there’s something going on it seems like everybody comes out and supports whatever the need is.”

Koby chimed in to say, “Without everybody we wouldn’t have the money together. It’s kind of like everybody didn’t think they had a voice to help out, but once we did the lemonade stand everybody did.”

Haley Burden, the mother of Archie and William, said she was touched by the incredible gesture of the Smith family.

“It meant the world to us,” she said. “We didn’t even know they were going to do a benefit for the boys, which makes it even more special because it just let us know they were doing it out of the goodness of their hearts. It makes me so happy to know that. I also loved that the little boys who did it are twins, too. It was very special for so many different reasons.”

Haley said it was nice to know so many people care about her family.

Koby and Cooper said more lemonade stands may be on the horizon.

“I just want to say thank you to the community for helping the Burden twins even though a bunch of people don’t know them that well,” Koby said.

Cooper, Koby, Kara and Colt say a prayer for the fighting twins every day: “Grow big and strong.”

To read the original story on the Burden twins, visit panews.com and search “Burden twins.”