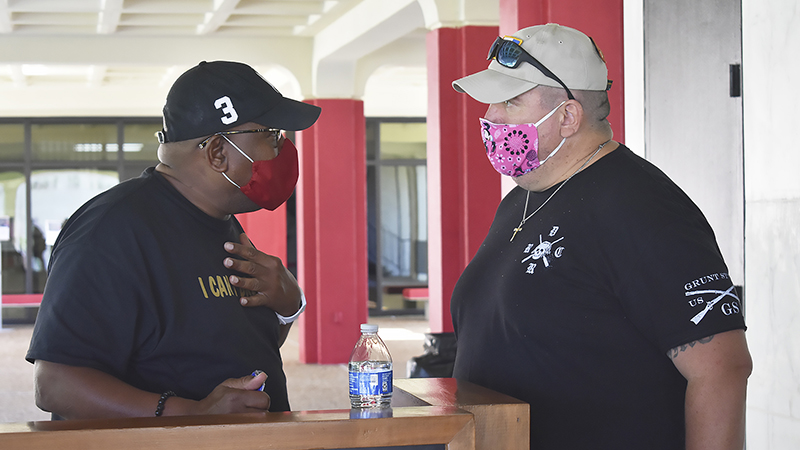 Mayor Thurman Bartie and Patrick A. Murphy hold a discussion at the end of Bartie’s news conference Friday in the city hall breezeway. (Mary Meaux/The News) 6-12-20

The fate of the relocation of a Confederate hero’s statue from Houston to Sabine Pass was met Friday with disdain and some anger before a compromise was brought up.

Bartie told a small gathering of people including media that he would not allow some outside influence to cause bad relations in Port Arthur.

“We are having a bad relation maybe at this moment because they want to bring something here that doesn’t belong here,” Bartie said, to which Patrick A. Murphy questioned the statement because the Civil War battle was fought just miles down the road. 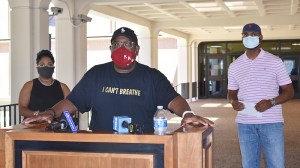 Murphy, a Port Arthur native and resident, disagreed with the idea of refusing the statue, saying it erases a piece of history.

The statue, Bartie said, was moved to Hermann Park in Houston in 1958 and had stood there until now, in 2020, during a time when leaders there did not want to be associated with the negative connotations.

Bartie said the current statue of Dick Dowling at the Sabine Pass park is there because Port Arthur has not stood up enough. There is still a Dick Dowling Road and state historical park. He also said the city had not had an organized effort to have the statue removed.

Sade Jones, who was there with her grandmother and son, said this is a new day and age and change must happen for her child. Dowling did not stand for her, she said.

Murphy called up the fact that Dowling was an Irish immigrant and could be a shining example of what an immigrant can do, though that statement was later disregarded.

Joan Jones, Sade’s grandmother, asked if the statue could go to a museum — a thought that seemed to take Bartie and Murphy by surprise. 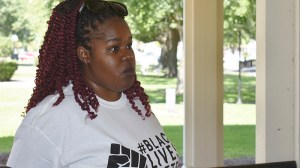 Both Joneses were wearing Black Lives Matter T-shirts while the mayor’s shirt had the statement “I can’t breathe” harkening to the death of George Floyd, who died in Minneapolis as a police officer pressed his knee into Floyd’s neck on May 25.

The Museum of the Gulf Coast is not city-owned, and Bartie said he could ask the management of the facility.

Joan Jones said there is compromising for both sides.

“No one is trying to take anything from anybody.

Bartie said at his bequest State Rep. Joe Deshotel spoke with the Houston mayor about the concerns and the statue will remain in storage in Houston, adding Turner did not want to be offensive to the Port Arthur community.

The mayor, Murphy and Jones had a compromise and after the press conference stood together and chatted.

The Associated Press reported a statue of a Confederate soldier called “Spirit of The Confederacy” will be moved from Sam Houston Park downtown to the Houston Museum of African American Culture. There “it can be interpreted in a way that promotes an inclusive and anti-racist community,” said Ann Stern, president and CEO of the Houston Endowment, a museum benefactor.

A statue of Richard W. “Dick” Dowling, a Confederate artillery commander prominent in the naval victory against two Union vessels in the Battle of Sabine Pass, will be moved from Hermann Park. The relocations were recommended by a Houston task force Mayor Sylvester Turner appointed to consider the issue.