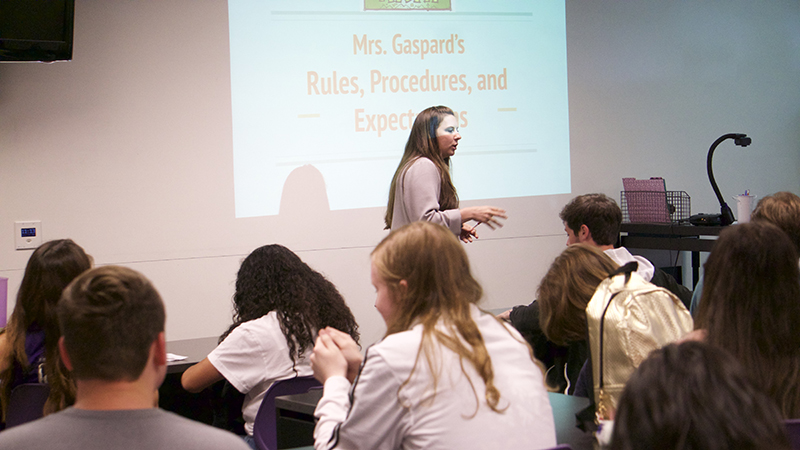 Mrs. Gaspard starts her first day of class at Port Neches-Groves High School in 2019-20 by reading out the rules and procedures for the upcoming year. (Cassandra Jenkins/The News)

GROVES — The Port Neches-Groves Independent School District Board of Trustees met in-person Monday at the West Groves Educational Learning Center for the first time in months.

The monthly board meeting began with the approval of routine consent agenda items but concluded with the purchase of 3,138 new Chromebooks and a bond progress update.

Superintendent Mike Gonzales said the Chromebooks were something technology director Crystal Werkheiser had asked the board to consider purchasing.

“As a matter of fact, she didn’t ask us to purchase, we were going to lease those at first,” he said. “We thought we’d lease those first, however, she and Sherri (Drawhorn) got together and realized after crunching the numbers that we were going to spend more money leasing these chrome books rather than purchasing.”

“We feel like the new chrome books are much better,” he said.

The computers that are currently at the high school will be passed down to the middle school and elementary levels.

“At that time, I think it puts us in a pretty good position where if we have to close schools down and some kids don’t have their own computers at home, we can possibly lend them these computers to be able to do their homework and do research,” Gonzales said “I think it’s a win-win for us.”

Among other large transactions, PNG approved $59,350 for fencing around the baseball and softball complex and a $47,900 three-level director tower for band.

Both transactions are funded with Trans Canadian Pipeline easement revenue.

Following the transaction approvals, representatives of CBRE Heery announced the next steps in the bond program.

Carbone said the West Groves Educational Learning Center is set for demolition early in the first quarter of 2021.

“We’ve been active behind the scenes,” he said. “This is one of the reasons we want to talk about the demo now is because a lot of things you see in the design process are not transparent in the community. You just don’t see it. Then all of a sudden things start to happen. That’s why we want to put this in a more staged approach.”

Carbone said the conceptual designs of the facilities are complete with schematic designs expected in the next two weeks.

“We’ve already gone over some renderings, initial sketches, layouts, programming of the facilities,” he said. “We’ve looked at where the classes are going to go, basically what they are going to look like and how it’s going to be sited on each property.

“It’s a very exciting time for us as we move forward. It’s going to be a team effort, so I’m looking forward to working with the PNG team to make sure this program is a success.”

A projected timeline shows all plans are currently on schedule. Within the 2020-21 school year, construction of third- through fifth-grade campuses is set to begin with planning and designing of pre-kindergarten through second grade campuses and the demo of WGEC.