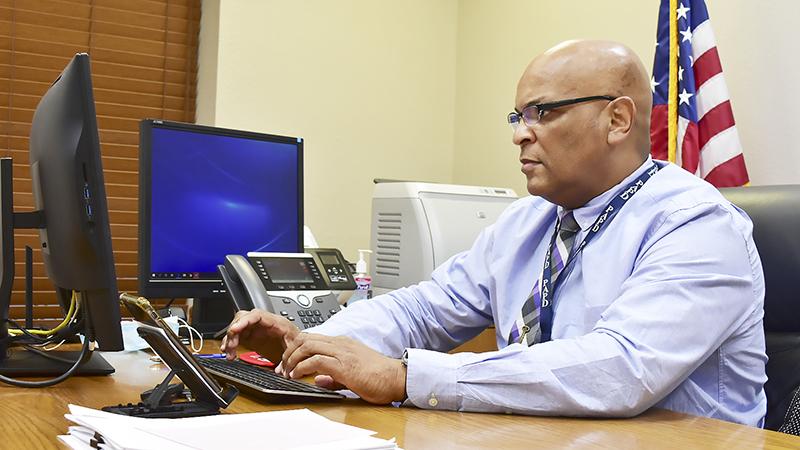 Jermey Houston feels the pain many others in Port Arthur do over the May 25 arrest in Minneapolis that cost a former Houston resident his life and began another chapter in the #BlackLivesMatter movement for racial and policing peace.

“I believe Chief Duriso has put measures in place and put people in place, really and truly, where if there is something going on that they have a problem with or something they want to speak [on], our doors are open,” Houston said. “We are available to the citizens.”

For two weeks now, people around the world have rallied, marched and demanded improvements in how persons of color are policed. The death of Floyd, a 46-year-old African American and former Houston resident who was living in Minneapolis, at the sustained knee of white cop Derek Chauvin has sparked a worldwide conversation about systemic and social racism amid controversies surrounding the deaths of other blacks at the hands of law enforcement and so-called citizens’ arrests this year alone, namely Ahmaud Arbery in Brunswick, Ga., and Breonna Taylor in Louisville, Ky.

Houston said he knows of no training for the method Chauvin used in arresting Floyd to his death. Port Arthur Police bans kneeling on one’s neck regardless of length of time.

Asked what officers can do to avoid using excessive force, Houston said: “If you would stick to what you have actually been trained to do, and also I would say this: If you treat the citizens the way how you would want to be treated as well, you wouldn’t have any of those issues.” 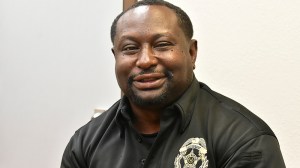 To protect, serve … and live here?

Part of the problem with police-citizen relations is that some police officers don’t reside in the community they serve, Joshua Bell said.

The 32-year-old Port Arthur resident voiced that opinion from the floor while Duriso and Port Arthur Mayor Thurman Bartie were speaking during a protest rally at the downtown Pavilion on June 2. Bell and other protesters also suggested that each officer live in Port Arthur so residents can get to know who is serving their community.

“We need local police to police us because we’ve got police from all these different areas, suburbs, policing us, and they’re scared of us,” said Bell, an African American and ex-Marine. “The first thing they do when they get out the car is pull out their gun for anything. They’re ready to pull out that pistol on us. We’re regular-working people up out here.”

Bell was later invited to the stage to share more of his concerns.

Duriso, a native Port Arthuran himself, said “quite a few” of his officers live in the city, but didn’t immediately have a number of how many. He does agree living in Port Arthur would give an officer an opportunity to get to know the people he or she serves.

Among incentives for an officer living in Port Arthur are additional pay depending where one lives in the city and extra points on a written exam before earning a badge. 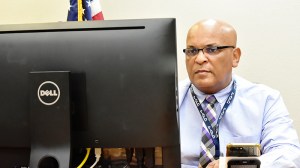 Port Arthur Police Chief Tim Duriso was happy that the protest rally at the Pavilion on June 2 went off without incident. (I.C. Murrell/The News) 6-8-20

Houston, 40, joined the PAPD 17 years ago as a way to serve the people with whom he grew up.

“As a younger guy here in Port Arthur, I would hear about a lot of different issues as far as the people dealing with police,” he said. “I said, ‘Hey, what more of an opportunity than me to become the actual police, go out and serve and see if I can bridge some of the gaps between the community and policing?’”

The reasons are similar to why Duriso, who declined to give his age, began his law enforcement career 35 years ago in the PAPD. He worked in the department 13 years and then served with the Drug Enforcement Agency for 20 years.

“As long as I’ve been in law enforcement, I still think I can save the world,” Duriso said. “I know that’s ambitious. I know people would say that’s impossible, but that’s my mentality. Whenever I’m looking for new officers, I’m looking for officers who think they have something to offer to help the citizens, like crime victims, elderly people who need a flat changed, babies, people that are being misused.”

The “Golden Rule” Houston alluded to when asked about limiting excessive force is a constant message Duriso delivers to his officers.

“Treat them like your family members,” Duriso said of treating citizens and coworkers alike. “We’re here to protect and serve the public. While doing so, make sure you protect yourself because we want to go home at night, also. In doing that, you have to remain cautious of your surroundings in each situation.

“My message is, we’re a community first. That’s what we do. We protect and serve.”