I.C. MURRELL — Port Arthur voices deliver messages for all who will listen 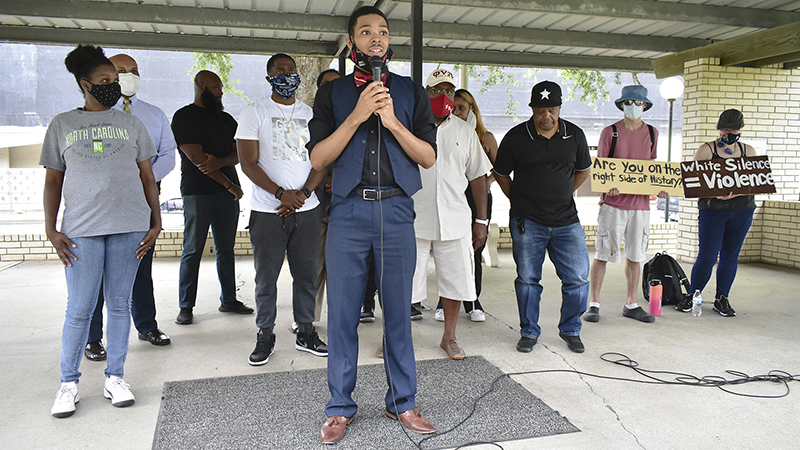 At 17, Taylor Getwood knows how to get a message across.

That message was not going to stop when a peaceful protest wound down in downtown Port Arthur on Tuesday night. Getwood made sure of that, organizing a rally the very next evening at Martin J. “Popeye” Holmes Park.

So was a rally including Stephen Jackson last Friday at Minneapolis city hall, sparked by the death of his friend George Floyd at the hands — actually the knee — of a cop, all caught on video. (And, for what, a counterfeit $20 bill, if indeed it was?)

Dressed in all black and wearing a cap reading: “Port Arthur, TX, land of the trill,” the 42-year-old retired NBA player and state champion at Lincoln High School called out those in charge who like to cover up crimes as fatal as the one against Floyd.

“He was somebody dedicated to being a protector and provider for everybody,” Jackson told CNN’s Chris Cuomo on Wednesday. “He was one of those guys that wanted to be the guy to make sure everybody was great. A lot of times, when you grow up in neighborhoods we grow up in, a lot of neighborhoods have different beefs and they don’t get along. George can be from this side, but he’s the only guy from this side that could go on the other side and make everybody get along.”

That is how Floyd should be remembered. But an act of lawlessness in law enforcement has made it otherwise. Jackson is now at the forefront of a movement to help all black Americans be heard.

Locally, we African Americans were given an opportunity to not just raise our voices, but also lift our voices. We demanded to be heard and we are now heard, as we should be.

This is our moment in time to change the course of history and encourage others to join us in a movement for change, which can happen at the polls. Those who matriculated to the Pavilion on Tuesday got the message and delivered their own.

The message — Black Lives Matter — is directed to everyone who will listen. It is more than a hashtag. It’s a cry for acknowledging that each of us is 100 percent of a person, not three-fifths, and definitely not an easy target for bad cops. It’s a desire for everyone to stand with us in peace and help continue a conversation that has to be held.

We know many will ignore the message. They’re only leaving themselves out of the solution, which is to foster peace across people of all backgrounds, professions and economy levels.

If you don’t understand what we’re going through but want to understand, ask me. Ask anyone who looks like me.

I will not pick a fight. I will not say, “I’m right, and you’re wrong.” Productive discussions require voicing out and listening from everyone.

For that reason, I acknowledge the apology of Drew Brees and completely forgive him. The New Orleans Saints quarterback has said he “completely missed the mark on the issues we are facing right now as a country,” a day after saying he would never agree with anyone disrespecting the U.S. flag by kneeling during “The Star-Spangled Banner.”

Brees made a tone-deaf mistake, but it was nowhere near as egregious as someone shouting a racial epithet at a minority or calling someone outside of his or her name. He, like every other human, deserves to apologize and atone for his error and be heard in the process.

If everyone gets the message, maybe no other person has to be knelt on for a crime that doesn’t fit the punishment. Maybe Twitter will be peppered with more sincerity and understanding from a president and the police force will not be used at the pleasure of anyone. Maybe journalists won’t have to take rubber bullets and tear gas while operating in an essential service of information for the entire community.

Maybe every black human being will be seen as a whole person, not three-fifths.

Just don’t forget this that Dr. King also said: “We may have all come on different ships, but we’re in the same boat now.”