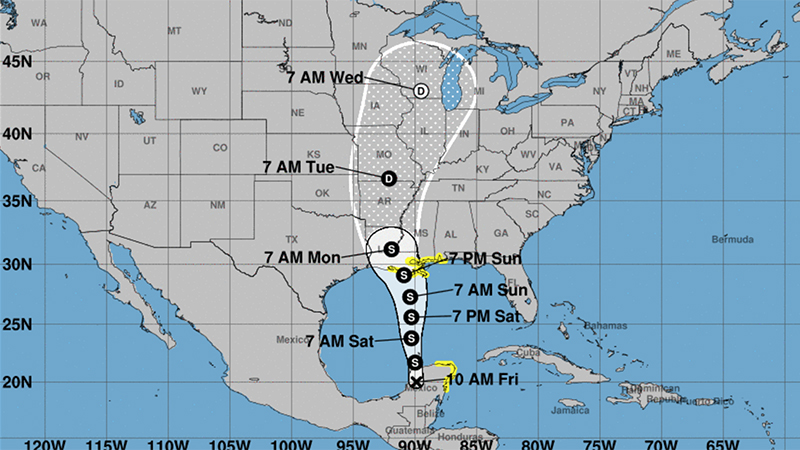 Hurricane preparation is a bit different this year as there is now COVID-19 to think about.

The Atlantic Season, which began Monday, already has a named storm, Cristobal, which is not expected to become a hurricane.

Hurricane preparedness as it relates to COVID-19 was the topic of discussion for a Zoom meeting headed up by the Greater Port Arthur Chamber of Commerce on Thursday.

Jefferson County Judge Jeff Branick said personal protective equipment is being stockpiled and search-and-rescue operations will occur in the event they become necessary.

And if it becomes necessary for an evacuation during the season there are hubs that the county is working with that will accept the folks in need of a place to go.

“We may have additional buses where we can do temperature testing on all of the individuals getting in the buses, and if some have that or other symptoms of COVID-19 we will probably segregate them to another bus so not to endanger others,” Branick said.

Texas, he said, saw a 33 percent increase in COVID-19 cases over the past two-week period where some of the spike is coming from prisons, meat packing plants and nursing homes.

Branick said the area does not usually have a storm this early into hurricane season and that he and others are in contact with the National Weather Service. The Thursday morning meeting did not provide much information he said as the path of the storm is hard to predict this far out — “basically it could hit anywhere between Galveston and Florida but the Texas Division of Emergency Management has it coming our direction,” he said.

Should a mandatory evacuation be called — which is not expected with Cristobal, then the only roads out are U.S. 69, U.S. 96 and Texas 287. Traveling east or west from Jefferson County will not be allowed

“We don’t expect a mandatory evacuation,” he said. “And if this does strengthen, the top winds will be 60 mph. It has to be 74 to be considered a hurricane.”

Evacuation planning is done way in advance as it includes a possible 255,000 people in Jefferson County alone. The standard timing is 72 hours before tropical storm force winds reach the coastline.

Hurricane Harvey, which dumped a record amount of rain on the area leading to widespread flooding, occurred in 2017 and no evacuation order was given.

“Harvey and (Tropical Storm) Imelda, with both, the forecast was horribly wrong,” Branick said. “At noon on the day Harvey hit, the National Weather service was telling us the storm would come through very quickly and not leave much rain. By 4 p.m. they called back and said it had just turned southeast and you better hang on.”

Calling a mandatory evacuation is hard on some of the most vulnerable residents, those in nursing homes. Sometimes the evacuation alone will kill them.

Making the call of a mandatory evacuation also has ties to insurance. If the county judge does not call for mandatory evacuation and people evacuate to another town and stay in a hotel is one thing but if he does then those who left can get additional living benefits under their homeowners’ policy.

Port Arthur Police Chief Tim Duriso said he has met with the city manger on a few occasions as well as city staff and more meetings are scheduled as all eyes are on the Gulf.

In addition there are already plans in place with hotels for first responders to work at should there be a storm. In addition there are also some shelters identified such as the Bob Bowers Civic Center and the Buu Mon Buddhist Temple. Duriso has also been in touch with Port Arthur Independent School District Superintendent Mark Portiere, he said.