Ed Kestler retires from The News after 38 years 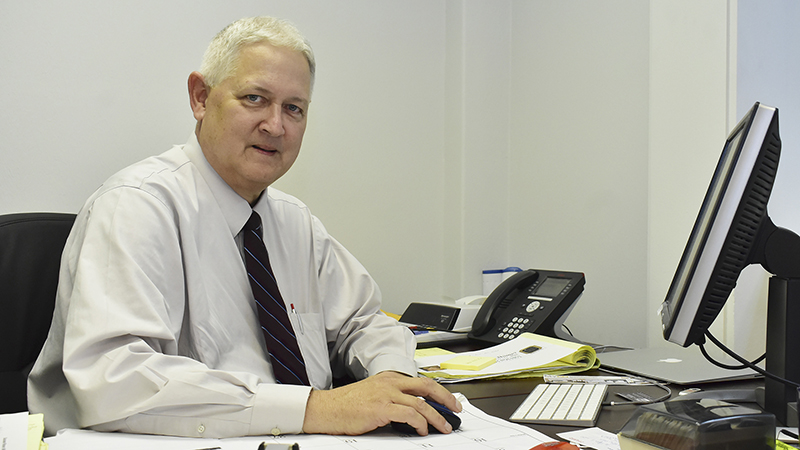 Ed Kestler has been working for the Port Arthur News since 1982.

Today (June 5), the 61-year-old will retire from a long career as a senior advertising representative.

Born and raised in Port Arthur, Kestler graduated from Thomas Jefferson High School in 1977 and played for the Yellow Jackets. He went to Lamar University in 1981 for his bachelor’s of business administration in management.

“When I graduated at the time, the oil industry was kind of tight and I wasn’t looking to move from this location,” Kestler said. “So I answered an ad in the paper thinking I would do that for about a year and then move on, but I found I really enjoyed it and the people. I never left.”

In his tenure, Kestler has worked under 13 publishers, changed positions three times and watched a changing industry adapt to a new world.

“Everything was different back then,” Kestler said. “The way the paper was put out before computers, it was all very manual. We used a lot of math back then, measuring art, type and everything in between. The paper was held together by wax and we used a slide rule.”

A slide rule, also known as a proportion wheel, was used to resize an image to fit within a target width or height.

Kestler said he has watched many things change in the industry.

His career started with a two-story building in downtown Port Arthur. It will end on Memorial Boulevard.

“There was a lot of people back then,” Kestler said. “We had two part-time girls that just ran proofs, plus an advertising staff that was more than all of the paper today. It just happened over time as technology increased. People began to retire and move away.”

As the paper changed, Kestler remembers the icons he’s met, the friendships he’s made and the memories forever etched in his mind.

“We used to have a baseball team, we participated in bowling leagues and I managed a duck lease in Sabine Pass the newspaper had,” he said. “Meeting some of the local icons like Aubrey Raiford, Erwin Mingle, Poochie Darby and Martha Ferguson were special moments in my career.”

“I’m going to miss all those activities, all the people and the friendships of my co-workers and customers,” he said. “I’m especially going to miss working with area politicians on their ads during election season.

Diana LaBorde, now president of the Nederland Chamber of Commerce, worked with Kestler from 2001-2015.

“I loved working with Ed,” she said. “He was a real sharer. He tried to give you everything he knew and he was good at selling, but he didn’t push it on you. He wanted to share his knowledge and he was really good at what he did.”

LaBorde said Kestler taught her the importance of forming relationships, a lesson she carried with her into the chamber.

“He said sales isn’t just going out and selling ads, you need to form relationships so they know you have their best interests in mind,” she said. “I carry that with me now no matter what I’m doing. That’s Ed’s claim to fame with me.”

Port Arthur News Publisher Stephen Hemelt, who started in July 2019, said Ed has been an invaluable asset to the paper.

“We’ve been serving this community for more than 120 years, and that has been possible because of the long-term contributions of so many dedicated employees,” he said. “Ed is a perfect example of that. He will be missed, but his contributions will benefit us for years to come.”

As he looks forward to retirement, Kestler said he is going to take a few months off to relax and do volunteer work.

“I’m looking forward to taking a little time off, catch up on some things and do some work for the great organizations in our area.”

As a final message to The News, Kestler said he is grateful to have been a part of an organization and family for nearly four decades.

“I’m very proud of the time I’ve spent at such a great local newspaper,” he said. “The Port Arthur News has a rich history and a great future ahead.”