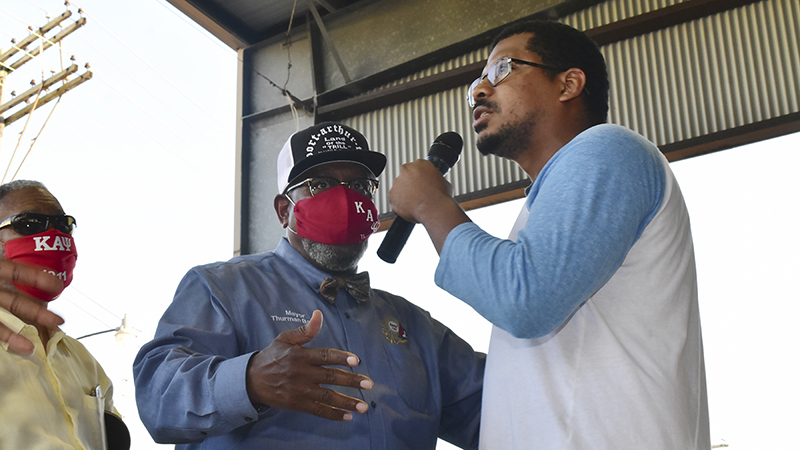 Former U.S. Marine Joshua Bell didn’t expect to say anything during Tuesday’s protest rally against racism and police brutality at the Pavilion.

But even as others including Port Arthur Police Chief Tim Duriso and Mayor Thurman Bartie addressed a packed downtown facility, Bell spoke out from the floor, interrupting Bartie at one point. 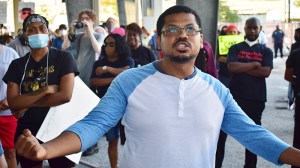 “Seeing everybody always talking about the same thing. We already know what we need to,” said Bell, a 32-year-old native and resident of Port Arthur, after being asked what made him voice out his concerns during Duriso’s and Bartie’s address. “What [do] they need to do? They have to be held accountable for something as well, sir. It seems like they try to shift the blame to us and talk at us. It’s not time for them to talk at us. It’s time for them to hear us. We need to be heard because we haven’t been heard.”

That’s why Kalan Gardner, president of the Port Arthur NAACP chapter, organized the rally along with city officials — so voices could be heard.

“There were no words being exchanged,” Gardner said. “It was just people voicing their frustration. It was no fighting, none of that. It was exactly what we wanted it to be — peaceful. People are frustrated, people are angry, so, yeah, we gave them an opportunity to voice out their frustration, and they did that in a peaceful way.”

Bell took that opportunity and was later invited to the stage. 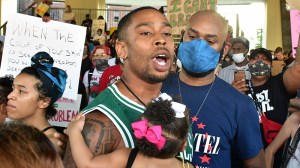 He wasn’t the only rally attendee who took the microphone after voicing from the floor. Fellow Port Arthuran Parris Olliver, 26, sounded off while others bowed their heads during prayer.

Olliver has a 3-year-old son and 2-year-old daughter. 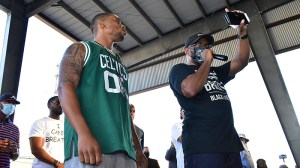 The rally was held eight days after Houston native George Floyd died following an arrest in which a Minneapolis police officer pressed down on his neck with a knee.

Minnesota Attorney General Keith Ellison on Wednesday upgraded a murder charge against Derek Chauvin and charged three of his fellow cops, Thomas Lane, J. Alexander Kueng and Tou Thao with aiding and abetting second-degree murder. All four were fired following the May 25 incident, but only Chauvin had been arrested.

Bartie led a chant of: “What’s his name? George Floyd!” when Bell and an unidentified woman interrupted him by continuing to sound off.

“Wait a minute, I ain’t going to dis’ you, and you know I’m not going to let you dis’ me,” Bartie said. “Now, please, we’re not ready for what you want to do right now.” Bartie then shared the mike with Bell and Olliver on stage. A few other protesters followed suit.

Duriso has denounced the actions against Chauvin, which were recorded on video and led to nationwide protests across the country. But many demonstrations in larger cities have turned violent and resulted in physical contact by law enforcers.

“We’re not looking for violence,” Duriso said. “We’re trying to shed light on what we need to do to make law enforcement and out citizens cohabitate together.”

One idea Bell offered was to have each police officer reside in Port Arthur so they can relate to the citizens they serve.

“We need local police to police us because we’ve got police from all these different areas, suburbs, policing us, and they’re scared of us,” Bell said. “The first thing they do when they get out the car is pull out their gun for anything. They’re ready to pull out that pistol on us. We’re regular working people up out here.” 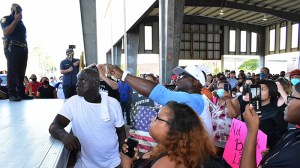 A rallier speaks out toward a speaker on stage Tuesday. (I.C. Murrell/The News) 6-2-20

‘The knee on your neck’

That knee now represents the social ills that people of color have faced and brought those against racism and police mistreatment together in one setting, Bartie told the audience.

“It’s not just about George Floyd,” he said. “You know what this protest is about? It’s about people in Port Arthur who suffer from the oppressors with a knee on their neck because they can’t get a job. This protest right now is about the oppressor who has his knee on African Americans, men and women, brown and of color who won’t even be called for an interview because of how you look.

“There’s a knee on your neck because of the educational system that will test our children. The test has already proven the children of color, African Americans, Hispanics and some Asians do not test well because these tests are still skewed toward white Americans. Y’all, that’s the knee on your neck.

“There’s a knee on your neck because someone in a board room made a decision to not have a bank in this part of town where there are a lot of you in this crowd who have money you can put in a bank. That’s the knee on your neck.

“We can’t bring that brother back, but we can change what’s before us. All I want us to do is don’t forget this night. Don’t just let the man die and you be angry. You can be angry and sin not.”

Bartie then turned toward Bell and an unidentified woman and said: “Have respect, brother. Have respect, sister. It’s all right to be angry, but do something about it.”