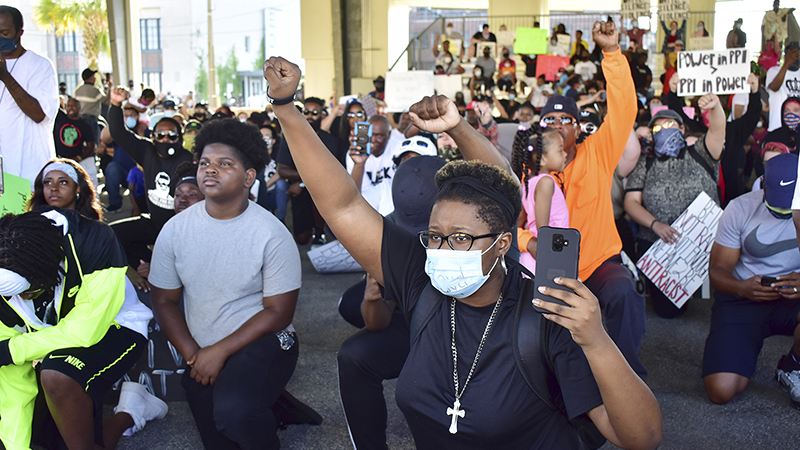 Chelsea Traylor, foreground, of Port Arthur records video and takes a knee along with other protesters in remembrance of George Floyd during a rally Tuesday at the Pavilion in Port Arthur. (I.C. Murrell/The News) 6-2-20

Members of the Port Arthur chapter of the National Association for the Advancement of Colored People and Port Arthur city leaders succeeded in making Tuesday’s protest rally much more peaceful than ones that have resulted in nights of unrest and use of police force in larger cities.

The rally at the downtown Pavilion went on for about an hour with no acts of violence or physical interaction involving law enforcement. At least three attendees took Port Arthur Police Chief Tim Duriso to task while he took the microphone — and were eventually welcomed on stage to speak out — but local NAACP President Kalan Gardner considered the rally successful and peaceful.

“The turnout was beautiful,” said Gardner, who pastors First Sixth Street Baptist Church. “I don’t know how many people we had, but we had a Pavilion full, and it was beautiful, beautiful.”

Protesters packed the Pavilion to rally and speak out against acts of racism and police brutality eight days after a Minneapolis cop pressed down the neck of Houston native George Floyd with a knee, leading to the cop’s arrest four days later on a murder charge. He and three other police officers at the scene were fired. 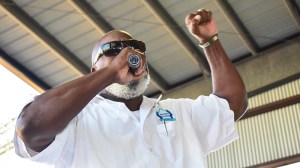 Many protesters marched down Procter Street following the rally in solidarity.

Port Arthur native Stephen Jackson, a retired National Basketball Association player, has rallied in Minneapolis’ city hall in support of Floyd, a friend whom Jackson considered a “twin” and “brother.”

Duriso spoke out against Floyd’s killing, as he has in recent days.

“We sympathize with you and Mr. Floyd and his family,” Duriso said. His speech was drowned out for a few seconds by the sound of motorcycle groups revving their engines in support of protesters.

“We’re not looking for violence,” Duriso added. “We’re trying to shed light on what we need to do to make law enforcement and our citizens cohabitate together. We need peace. We don’t need violence. Violence is not the answer. If you’ve been following the local and national media, you would know that George Floyd, his children and other family members have asked for peaceful protests for their father [and relative].” 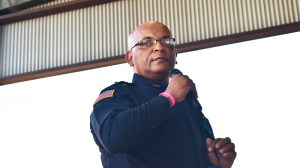 Local environmental activist Hilton Kelley called for systemic racism in the justice system to end. The shooting deaths of Breonna Taylor in Louisville, Kentucky (on March 26), and Floyd in Minneapolis were among the latest of police-involved incidents against African Americans that have kept a nation at unease in the past decade. The Federal Bureau of Investigation opened an investigation into Taylor’s death on May 21, bringing her death to light nationally. 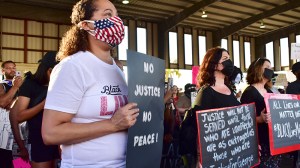 From left in foreground, Christina Alexis-Wasson of Port Arthur, Sharay Hamby of Beaumont and Shana Surette of Port Arthur protest against racism and the death of George Floyd at a rally in Port Arthur. (I.C. Murrell/The News)

“The code of silence in police departments must end,” Kelley said. “And justice must prevail … for all people, not just some people.”

Kelley then led those in the rally to a knee on stage in Floyd’s memory and others who died from police brutality.

Gardner stressed the importance of establishing and supporting black-owned business and local schools as a way to bring about change and self-sufficiency in the black community.

“I believe we got the message across about how we wanted to change, how we wanted to do the change, so not only did we come out and just say we wanted change, but I think we came out and gave good principles as to how to go about that change as a community.”

Wednesday at panews.com: Attendees speak out from the crowd and Mayor Bartie’s reaction 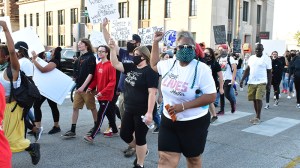 Protesters march down Procter Street from the Pavilion following a rally against racism and police brutality. (I.C. Murrell/The News)