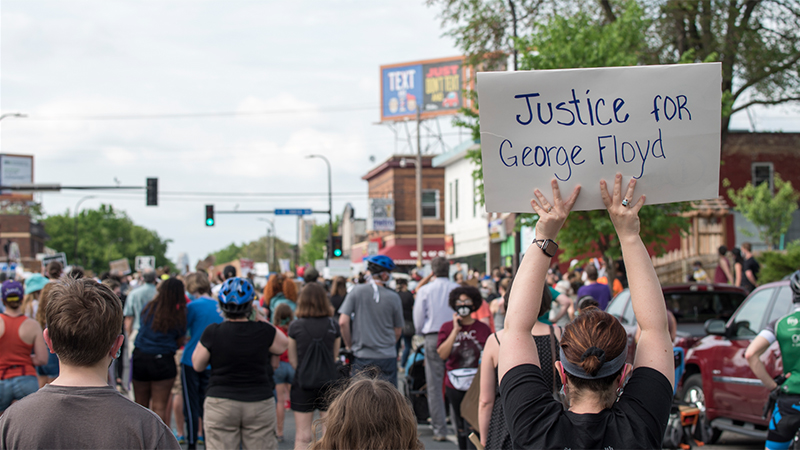 On Tuesday (May 26) people protested against police violence after the death of George Floyd.

My wife, Candace, and I have engaged in numerous dinnertime conversations this week with our children about the tragic and wrongful death of George Floyd, the African American man killed following an encounter with Minneapolis, Minnesota, police.

My children are 10 and 12, and it’s important for me to understand how they are taking in this monumental event, which will surely engage our nation into the near future and beyond.

Race relations in our country are strained, tensions are high and the need for understanding is great.

But I struggle with what I can actually teach my children. I’m a white man in America and my children are white, too. Our experiences are going to be significantly different than any George Floyd experienced.

We know this because of what we witnessed in our own neighborhood.

We live on a sleepy street in Nederland, sharing a duplex with an African American family that includes two children.

One day recently after coming home, my wife told me the police had been called because someone yelled profanities at our neighbors.

A day later I was able to speak with the father, and he told me a man in a pickup truck driving down our street yelled out the N-word multiple times while his wife and children were returning to their home. The perpetrator quickly sped away before a license plate could be recorded.

I asked my neighbor if he talked to his son, who was in third grade, about the incident. Of course, he had, explaining to him there will always be people in the world who judge him for no reason other than hatred.

That’s a conversation I’ll never have with my children. It’s a perspective white people, like myself, will struggle to fully grasp.

I’m 39 years old and have had countless teachers, principals and bosses pass through my life. Throw in the times where security or police executed authority near me, and in all those times, rarely, has the person telling me what to do been anything other than white.

I’ve never felt afraid of authorities for judging me or nervous the color of my skin could get me in trouble or far worse, killed.

In nearly all societal situations I’ve encountered, the authorities have been of the same race. That’s a privilege members of minority communities do not enjoy.

So with that perspective I struggle with what I can effectively teach my own children about the world they live in, yet share with neighbors of other ethnic backgrounds going through vastly different experiences. I want them to understand life isn’t the same for everyone, but it is their charge, as well as mine, to help bridge the gaps as much as possible.

Then, I take my attention to my brother, who stood as the best man in my wedding. He is a sheriff’s office deputy in Louisiana and surely takes the scenes of protests that sometimes turn violent in a completely different perspective.

As I ask my children to step outside of their own experiences to try to understand what George Floyd went through in his life, I ask them to keep their uncle in their hearts, as he must walk the line each day vowing to protect and serve in the most strenuous of times.

He is an honorable man whose best days are ahead of him. I hate to think of what it does to him to be labeled as anything else.

My family’s dinnertime talks never end in answers. Those don’t exist in society, but we do pledge to open our hearts to welcome the perspectives of others, especially those different than our own.

And we pray for the wellbeing of every protester and peace officer that stands the line in the wake of George Floyd’s death.