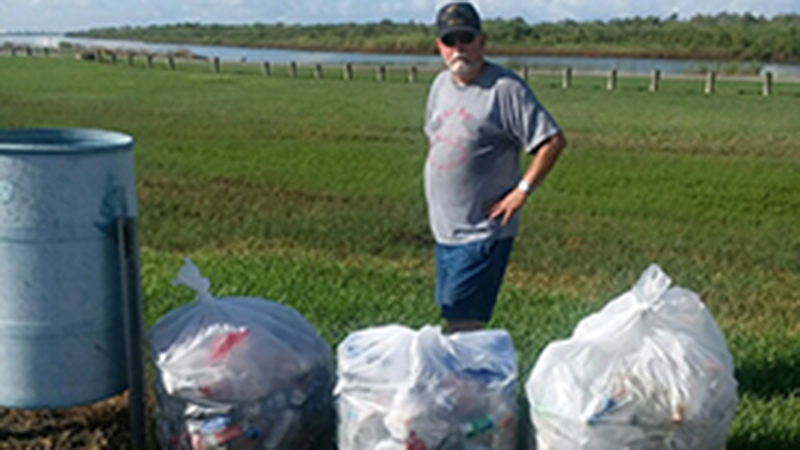 Ronnie Moon stands by bags of trash collected in 2018. (Special to The News)

It’s no secret that the effects of COVID-19 are deadly to humans, but while the virus has been ravishing through the human population it’s been a somewhat saving grace for the environment.

The shutdown of businesses and travel during the pandemic cleared the air in large cities, decreasing deadly pollutions worldwide.

China experiences a 40 percent decline in nitrogen dioxide, a pollutant produced from burning fossil fuels. The United Kingdom’s nitrogen dioxide pollution fell 60 percent during the lockdown with other countries reporting the return of visible skylines, mountains or wildlife not seen in centuries.

The COVID-19 lockdown has claimed many lives globally, but finding a light in the darkness, we have watched our planet heal.

Now, as restrictions become lifted and life returns to the planet we must remember to continue to take care of the Earth post COVID-19.

A photo recently surfaced from Galveston’s Crystal Beach littered with trash after Memorial Day weekend saw a surge in residents flocking to the open destination.

“Each holiday, each major weekend we have the same problem,” he said. “It’s pathetic. If they bring something with them, please take it back home. If they wouldn’t want someone to do this to their backyard, please don’t come down to Galveston County or any beach and do this.”

Southeast Texas’ own backyard filled with parks, lakes, rivers, marshes and islands did not look the same.

Ronnie Moon, a resident who cleans Pleasure Island’s South Levee on a daily basis, said there was some trash left behind from Memorial Day weekend, but not much.

“People are still leaving trash,” he said. “I talk to them. It’s not near as bad as it looks on the beaches. It was a little more than usual, but not too much. I carry a huge plastic bag and when it’s full that’s a lot of trash. (Tuesday), it was about a third-quarter full. All the trashcans were full and a lot of that is what I put in the trashcans from picking up.”

Moon has been collecting trash on the manmade island for nearly 40 years. He said people are getting a lot better about cleaning up after themselves.

“When I see people out during my walks, I offer them a trash bag,” he said. “Sometimes they already have their own. People are getting a lot better. It’s a lot of the same group that leaves waste behind, but we just need to take care of our environment. It’s beautiful, it’s here and it’s ours to take care of.”