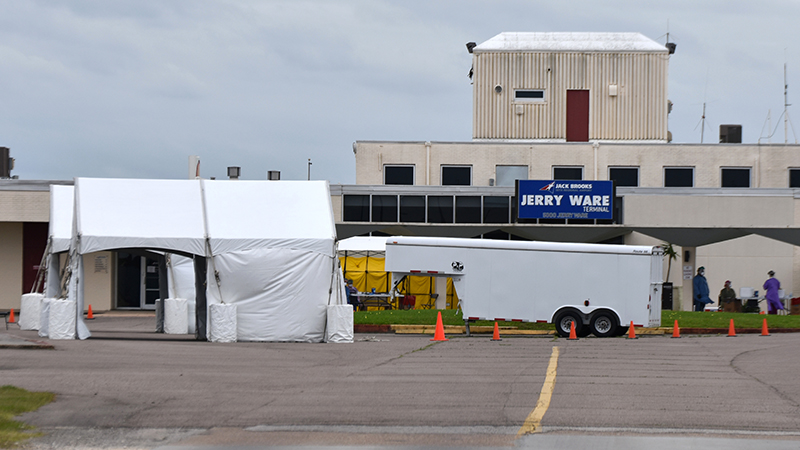 The COVID-19 testing site at the Jerry Ware Terminal at the Jack Brooks Regional Airport closed this month.

Free testing for coronavirus without the need for insurance is returning to Port Arthur.

Riceland Healthcare Systems will provide testing in Port Arthur, with a starting date and location yet to be determined by the city council.

Port Arthur Health Department Director Judith Smith suggested to the council either the Pavilion or a site near Gulf Coast Health Center on the west side of Port Arthur for a location.

“I’m going to start working on the site first and then get back with them to give us dates,” she said Tuesday. “That’s what we’ll do this week. I don’t know that we’ll have everything situated to start next week. … For sure by the following week.”

Insurance companies will be billed for policyholders, while those who do not have insurance will not be asked for payment.

The Port Arthur City Council on Tuesday approved a $30,000 contract with Riceland, which also operates free testing in Beaumont. Those with questions about COVID-19 can call 409-983-8880.

“The Port Arthur Health Department will be responsible for receiving information and contact tracing,” Smith said, adding the council is asked to compensate two Riceland staff members for providing the test at a cost of $15 per hour, a rate Smith said that Riceland has requested.

Smith added the Texas Workforce Commission will also provide staffing to help with contact tracing and manning phone lines. A majority of the $600,000 funding the city is expected to allocate from a Community Development Block Grant will go for testing, according to City Manager Ron Burton.

The contract approval comes as the number of positive coronavirus cases in Port Arthur has remained at 60 since May 17, with the PAHD reporting cases as recent as May 22, according to a city news release Tuesday. Four citizens have died from the virus, 47 have recovered from COVID-19 and nine are still in quarantine.

Nederland has 15 cases and one death, Groves has 11 cases and Port Neches eight cases. Of the 93 reported patients in Port Arthur and Mid-County, 48 are female and 45 are male.

About 1,100 tests have been given to Port Arthur residents, Smith said, which would mean about 5.45 percent of those who have tested were confirmed with coronavirus.

“I would hope we could do more testing,” Smith said, asked whether the city has achieved representative sampling for COVID-19 cases. “That’s really the goal. We haven’t reported a case since May 17. I don’t know if it’s because we haven’t had mass testing.”

Between May 18, the Monday after testing at Jack Brooks closed, and the most recent report from May 20, Beaumont saw nine new cases and has 373 total. There were 345 in Jefferson County through May 15.

Smith said the return time for results from Riceland has been within 24 to 48 hours on average.

Categories represented include African American (black), white, Hispanic, Asian, other and no answer (*2 for Port Arthur and 1 for Nederland were not classified):