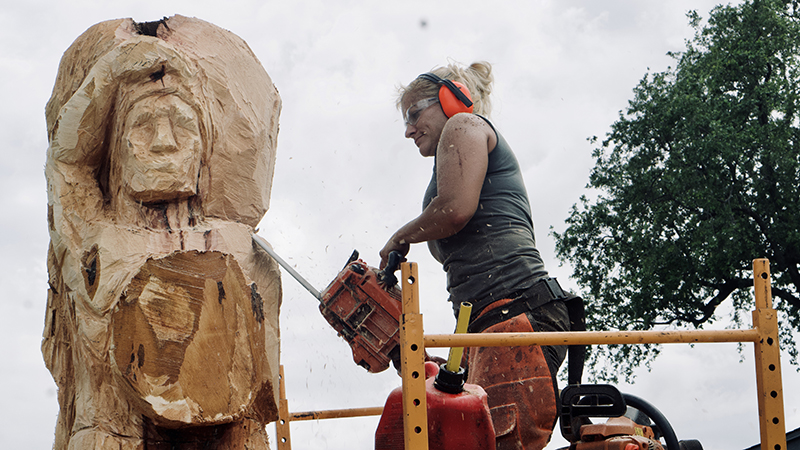 Callaway, a Port Neches resident, saw a pesky tree in her front yard and instead of cutting it down, she decided to commission it into a piece of art.

“The tree was just sort of there,” Callaway said. “My fiancé didn’t like it either, so we were like ‘OK, we’ll cut it down,’ but I said “Let’s not cut it down all the way, let’s just do something with it.’”

Originally, the couple was going to carve the three remaining branches into a totem pole with an eagle flying on it. Callaway decided it was too basic. 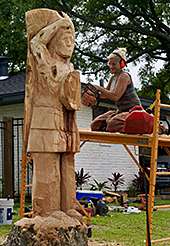 La Porte chainsaw carver Della Meredith carves out an old tree into an Indian head outside a house in Port Neches.

“Everybody does totem poles,” she said. “We wanted to do something a little bit different, so I said, ‘I want an Indian where he is looking out over the water.’”

LeBlanc and Callaway decided to hire a chainsaw carver from La Porte to bring the image to life.

“We followed her on Facebook,” Callaway said. “She does some awesome stuff. That’s the only thing we knew to do with the tree was to have someone come in and carve it with a chainsaw.”

Della Meredith was the one called in.

“I used to be an art teacher for high school and middle school,” Meredith said. “Then I stopped teaching and started an art business. I live out by the coast so they were building palapas and I started working for a company that did that. They had a carver come in. I took woodshop in college and decided I wanted to try it out, so my mural business changed into carving.”

“I go to Louisiana a lot,” she said. “So when I heard about this project, I didn’t know that the town had all this school spirit going on, and then it actually has the historical background, so it’s pretty interesting and I like carving Indians, so I was really excited to do that.”

The Indian, which will sit in Callaway’s yard, is directly across from the Neches River Wheelhouse.

The work was set for completion Saturday (May 23).

Callaway said she fully expects the finished project to be an eye-catching monument.

“I don’t like doing just normal things,” she said. “I didn’t want to just cut down the tree and it be bare. I thought, ‘Why not utilize it? Use it to our advantage?”