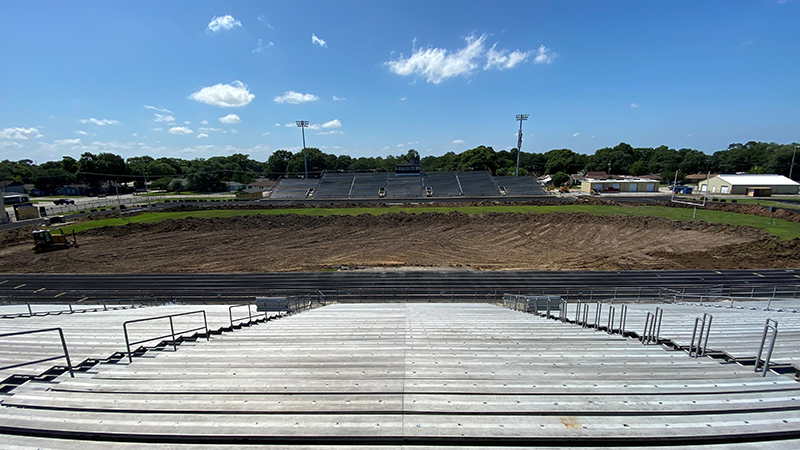 The work is part of a $155.6 million project the Nederland Independent School District is undertaking across several of its campuses after voters approved funding for it last May. The stadium upgrades will cost $4.5 million.

This first phase will be the installation of a Symmetry Astroturf 3D field to replace the old natural sod. 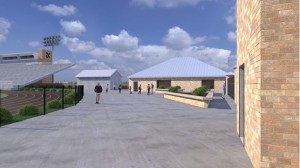 This image produced by design firm IBI Group shows how the renovated restrooms will look in phase two.

HB Neild, which is managing the project, has already moved approximately 200 loads of dirt over to the practice field nearby, according to Vice President Thomas B. Neild.

“We broke ground earlier this week,” Neild said. “Everything’s going good, we’ve had good weather, the district’s been behind everything we’ve been doing.”

Over the summer, HB Neild will focus work on finishing the field, including drainage and electrical conduits that need to be run for use inside the track.

“That’s what’s going to happen over the course of the summer,” Neild said. “For the next 10 weeks, you’re going to see a lot of activity inside the running track.” 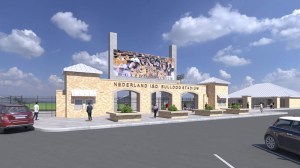 This image produced by design firm IBI Group shows how the new entrance to Bulldog Stadium will look in phase two.

Neild expects the turf field installation will be complete and ready to use by the time the 2020 football season begins in August.

Phase two, however, will not be complete yet. This phase includes improvements to the bleachers, press box, bathrooms, entrance and ticket booth. Not all details for these improvements have been finalized, and Neild expects to hold discussions with the district in July to solidify plans and timelines.

“I know in the past that’s been a big issue for the district,” he said. “Quite a bit happening over there.”

Some details already in place are an expansion of the press box to around 2,940 square feet, with home and visitor coaches offices, home and visitor restrooms, scout office, clock/PA office, radio office, video office and several camera booths. An elevator will also be added to improve accessibility.

Bathrooms on the home and visitor sides will be expanded to 4,000 square feet to facilitate maximum attendance. 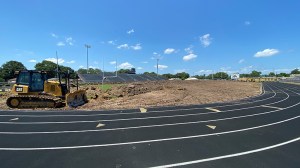 Construction HB Neild has removed over approximately 200 loads of dirt from the Bulldog Stadium field.

Phase two work is not expected to disrupt use of the stadium.

“One of the things that comes into play is you want to make sure the district has full advantage of the facilities and that we’re not impeding any of the sports that are taking place,” Neild said.

So far work has been on schedule, and the COVID-19 pandemic hasn’t caused any disruptions to installing the turf field. Workers are still engaging in proper social distancing and sanitization practices while at the site.

“Up until several weeks ago it was up in the air as to whether or not schools were even going to go back,” Neild said. “Once the state came to the resolution that was passed down to the districts that the students would not be going back, we were able to solidify plans as far as mobilization and starting work.

“Anytime anything like that comes up we’d hope we’d be able to find some kind of work around to stay on schedule.”