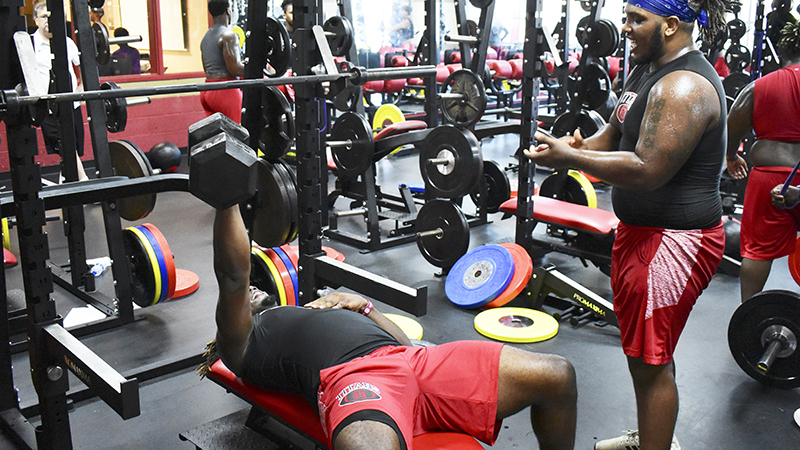 Memorial’s Jordon Thomas does a one-hand shoulder press as Keoni Evans encourages him during summer workouts before the 2019 football season at Memorial High School. Workouts, suspended because of COVID-19, are expected to continue this year beginning June 8. (I.C. Murrell/The News)

Texas high school athletic programs are waiting to hear from the University Interscholastic League on when they can start practicing with their players.

Until then, practices and competitions are suspended to help fight the spread of the COVID-19 pandemic.

What’s known is that limited activities will be allowed beginning June 8.

“UIL is aware of Governor [Greg] Abbott’s May 18 announcement and is actively working with appropriate state officials to allow schools to begin limited summer strength and conditioning and marching band activities on June 8, 2020,” Julia Atkins, UIL communications coordinator, said in an email.

“As soon as the details of that plan are finalized, UIL will release them to schools to allow time to plan and prepare for bringing students back to campus for these purposes.”

Local football coaches are doing their best to plan how they’ll get their players back into football mode after missing nearly all of spring training.

“I’ve got a good idea of what’s coming down from the UIL and from the governor, and I’ve got some things down on paper,” Memorial coach Brian Morgan said. “This time right here has been a difficult deal for us and for the kids.”

Nederland coach Monte Barrow believes the UIL might make adjustments to how much practicing the programs can allow during the summer.

“We’re all in the same boat,” Barrow said. “Everybody wants to give their athletes the best opportunity to be at their best, hopefully, when the season starts in August. They could give us those minutes during the day to where we can meet with our kids and do football-related activities. Last summer, they gave you so many minutes a day to do different things, but I think they’re going to add time to that, and possibly a Friday to the strength and conditioning part of it.”

Because of the length of time off, coach Brandon Faircloth at Port Neches-Groves says his team is going to be smart about coming back to practice.

“It’s been three months since we’ve been able to work with our athletes,” Faircloth said. “There’s going to be a lot of things that we’re going to have to work on before the season starts, and one of those is going to be strength and conditioning, getting them back in shape. We’re going to bring them back slowly to make sure that they stay healthy and so that they don’t have any soft tissue injuries.”

All three coaches acknowledge their athletes won’t be in the same condition they might have been in a normal year without a pandemic. For Morgan, what matters is the players are in shape by the time the season starts.

“I told our coaches — the good thing is we get them in June, but we’re not trying to play a football game until the end of August,” he said. “That’s when you have to be in shape. You don’t have to be in shape in June or July. That’s the whole process of getting in shape and getting back into football mode.”

Getting in shape within the timeframe will have its own challenges.

The practice guidelines from the UIL might allow for more times or more days, but not all players may be available to practice with the rest of the team, either out of strict limits on the number of players present or simply because of time conflicts.

“Some kids work and there’s vacations planned in the summer,” Barrow said. “We’ve got to be committed to one common goal and that’s being at our best come August as a team. You can’t prepare to be the best team if you’re not preparing as a team, with everybody doing it together. That’ll be the biggest difference I see, is everybody being there at the same time and being able to make that commitment.”

It’s likely everyone, coaches and players, are looking forward to practicing together again.

“There’s just something about being around your friends, your teammates and your coaches that’s really special, and we’re excited to do that,” Faircloth said. “I miss that aspect of my day over the last three months. It’s good to finally have a day like June 8 for me to see everybody and get back to working together.”