ON THE MENU — Local breweries share insights on reopening this weekend 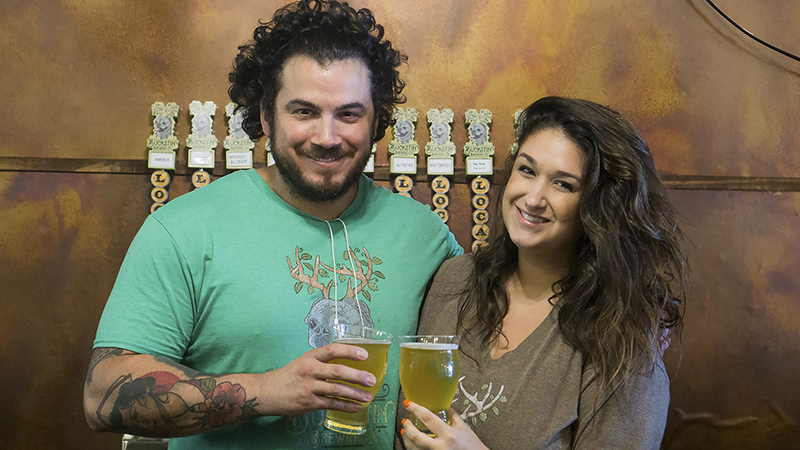 Buckstin Brewing Co. owners Justin Blanco, left, and Gabby Blanco, right, share a pint of beer Tuesday inside the brewery after hearing they will be able to reopen their dining room Friday. (Cassandra Jenkins/The News)

“We’re excited,” he said. “Little over two months of a little bit of revenue is hard. So we’re excited, but at the same time, restaurants are getting bumped up to 50 percent and we have to compete with that. Now, we might not go broke but we are at a state to maybe just break even.” 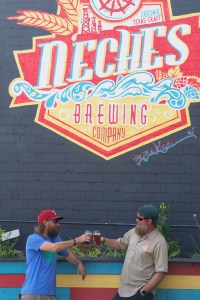 Blount, while grateful, said he was expecting to jump in at a 50 percent capacity rate alongside the restaurant industry.

“There is no rhyme or reason on why different places can open up at those percentages,” he said. “I was happy that we are at least opening this week, but when we started hearing everybody else was going to 50 percent, it was like, ‘What?’ We are always the last decision, but I guess we can’t complain. We could be in another state where everything is still locked down so we are still very grateful.”

Blount wrote several messages to Abbott over the course of closure, enlisting the help of his wife who also wrote messages almost daily.

“That’s the beauty of America,” he said. “You can write your politicians and, especially if we helped vote them in, they to listen to us. I know I raised quite a bit of hell on social media, and this is what raising a little bit of hell can do.”

Customers must be seated at a table with no more than six people at a time. No patrons will be allowed to sit at the bar top, and bar owners must physically block off the bar and remove stools.

Sanitation orders include frequently cleaning and disinfecting regularly touched surfaces such as doorknobs, tables and chairs.

Customers and employees are urged to wear facemasks and wash their hands while maintaining at least six feet of social distancing.

Disposable menus, single-use condiments and silverware must also be used.

“Despite the restrictions, we’re excited,” Blount said. “We’re prepping everything and doing one final deep clean. We’re ready. To be honest, we’re all kind of a little bit nervous, too. Even though it’s been just two months, it’s like how do we do this again?” 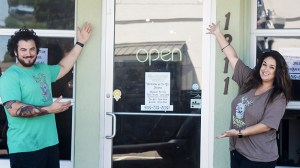 Justin Blanco, left, and Gabby Blanco, right, share their excitement in reopening their dining room to the community.

Alongside the Port Neches Brewery, Mid-County’s Buckstin Brewing Co. on Boston Avenue in Nederland will also open its taproom this Friday.

“It’s super exciting,” co-owner Gabby Blanco said. “That’s what some of my bartenders talk about is just missing the feeling of pouring a pint and handing a glass to somebody. Even just when we switched from curbside only to letting people come to the counter and order, it was so refreshing to have that human interaction.”

Caused by an unknown complainant, the restaurant, although abiding by the Texas law, was ordered to close last Thursday.

Blanco said the incident happening only days ahead of the reopening order is just good karma.

“We’re feeding frontline workers every day,” she said. “On Mother’s Day we fed the entire staff of Calder Woods. So when all that happened it was really disheartening, but it ended up backfiring on whoever filed the complaint because the city rallied behind us and we had record food sales that weekend.”

To the community, Blanco said saying “thank you” is just not enough.

“I can’t say enough, but this has been phenomenal,” she said.

Buckstin Brewery can host up to 25 people during the first phase, not including an outdoor patio area.

Sanitation efforts will include the use of single-use biodegradable plastic wear, triple sink disinfectant for growler refills, online ordering and point-of-sale contactless options.

“This is going to be so refreshing to have people sitting at the bar, just visiting and seeing our community again and not just through a to-go order,” Blanco said. “We’re ready to see everyone.”