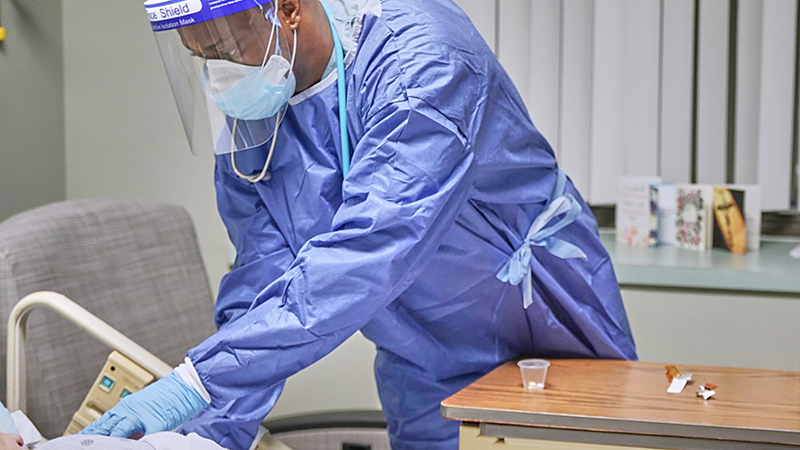 Alan Chambers’ parents attended Lincoln High School, which is where he graduated from in 2002.

Family roots are important to Chambers, who long took note of an uncle who had enlisted in the U.S. Navy.

So it wasn’t exactly surprising when, following high school, Chambers enlisted in the U.S. Navy.

That was Aug. 5, 2002. He was a product of the technical school, Stillwell, in high school and studied health science, which guided him to health care.

“I also wanted to serve my country in a way my civilian counterparts couldn’t,” Chambers said.

The decision 18 years ago has led to his frontline fight against COVID-19.

Chambers, a lieutenant, is part of the 100 EMF-M personnel staffing two 30-bed COVID wards in Louisiana.

The effort is part of the Department of Defense COVID-19 response, where trained military team members coordinate closely with state, local and public health authorities to ensure the well-being of their personnel and the local population.

“Working with the EMF side-by-side day-in and day-out has been a great experience,” Chambers said. “Our leadership directs us to the mission at hand, and we have been executing at a high level. Our team is made up of corpsman, nurses and doctors, all dedicated to supporting the Department of Defense COVID-19 response.”

Chambers describes the team as a close knit family that motivates and supports each other.

“When one is down and tired, we are there to lift each other up,” he said. “The people of Baton Rouge have been so grateful and thankful for us being here to help in this time of need, and it has been an honor to serve them.”

According to Maj. Roger Hollenbeck, the military personnel are not intended to replace existing staff or take the roles that could be filled by team members who might be reassigned from low volume areas.

Those from the military work to ease the strain of the significant patient care surge as part of the BRG Mid City family, Hollenbeck said.